Houston-based and Eagle Ford-focused Penn Virginia Corp., which emerged from bankruptcy in September, restarted its Eagle Ford drilling program in November and has plenty of drilling locations to target with a planned two-rig program. 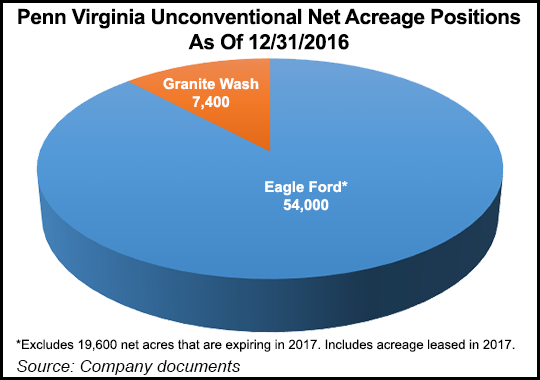 “In addition to these identified opportunities, we hope to further increase our inventory with additional down spacing, as well as future derisking of other zones, including the upper Eagle Ford and the Austin Chalk formation.”

The company said capital spending this year is expected to be $120 to $140 million, with about 90% directed toward drilling and completions in the Eagle Ford. The capital plan provides for drilling 41 to 44 gross wells (19 to 22 net wells) with 31 to 34 gross wells (16 to 19 net wells) turned to sales. Cash flow and credit facility borrowings are to fund the program. There is enough liquidity to accelerate activity, Penn Virginia said.

The preliminary estimate for the 2018 capital program, based on a two-rig Eagle Ford program and “Gen 3” completion design, is $125 to $145 million, with 90% being directed to Eagle Ford drilling and completions. Estimates could be revised based upon tests of the next generation of completion design and other activities. Cash flow is expected to fund the plan primarily.

Penn Virginia reported a net loss of $1.9 million for the fourth quarter, its first quarter out of bankruptcy.