Penn Virginia Corp. (PVA) is opening its Eagle Ford Shale oil window wider with the acquisition of 40,600 gross acres (19,000 net) in Gonzales and Lavaca counties, TX, for $401 million from Magnum Hunter Resources Corp. (MHR), which has set its sights, in part, on the Pearsall Shale. 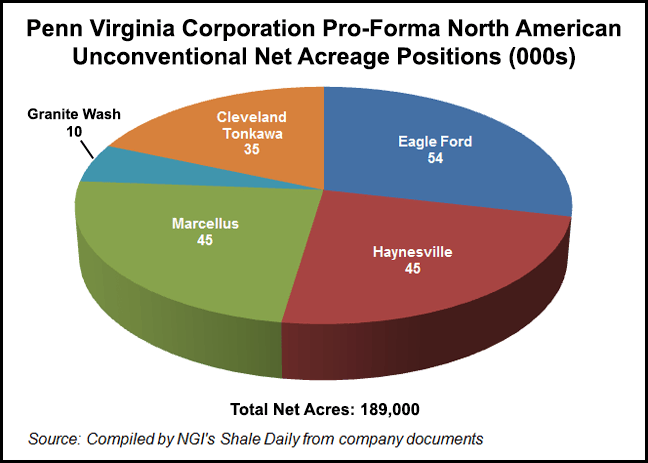 The acreage is adjacent to PVA holdings in both counties and will give the company 83,000 gross (54,000 net) contiguous acres in the Eagle Ford oil window. The deal, which is expected to close mid-May, increases PVA’s drilling inventory to 640 gross (420 net) locations from 295 gross (251 net), the company said.

Last summer, PVA sold most of its Appalachian Basin portfolio to focus on the Eagle Ford (see Shale Daily, Jan. 31; July 18, 2012). “Penn Virginia is here and is a real Eagle Ford player,” CEO Baird Whitehead said Wednesday during a conference call to discuss the deal.

“This is a transformational acquisition which will add significantly to our leasehold and drilling inventory in the Eagle Ford Shale play and is highly complementary to our existing operating areas, where we and MHR have had very successful drilling results. PVA will have at least an eight-year drilling inventory based on its anticipated program, he said. “Increasing our rig count to six rigs should allow us to achieve significant growth in this high-margin play.”

Wells Fargo Securities analysts agreed. “We are not surprised that the company pulled the trigger on this deal given the proximity of the acreage and management’s desire to build out additional drilling inventory in the main focal area,” the analysts said in a note Wednesday. “This is the major deal that management has alluded to potentially pulling off and should solidify PVA’s status as a de facto Eagle Ford pure play. The purchase price looks very reasonable, in our view, and the acquired acreage nicely fills in some major holes, essentially blocking up the whole position.

“Including additional cost of $1 million per location and $9-10 million well costs, we still estimate 25-plus% returns from future drilling projects, which we view as attractive given [the] low-risk nature at this point and eight-10 year inventory of projects. On the positive side, the deal adds highly complementary acreage, allowing for more-efficient development, should allow for added scale, and removes near-term inventory concerns in the play.”

The assets PVA is acquiring include working interests in 46 (22.1 net) producing wells, bringing PVA’s combined producing Eagle Ford well count to 117 (82 net) wells. Seven wells are being completed or awaiting completion and four wells are being drilled on the acreage being acquired, the company said.

Blocking up its acreage gives PVA an advantage over some of its Eagle Ford peers, Whitehead said. The company can cross acreage lines, drill longer laterals and has the ability to add acreage, he said. “It doesn’t get any better than this.”

Estimated net oil and gas production for the acquired assets was 3,200 boe/d during February, which would have brought PVA’s February production to 19,500 boe/d and its Eagle Ford production in February to 10,900 boe/d. Proved reserves being acquired are estimated at 12 million boe, 96% of which is crude oil and natural gas liquids and 37% of which are proved developed. Based on a third-party year-end 2012 review, PVA’s Eagle Ford proved reserves were 26.2 million boe, the company said.

The company’s full-year 2013 production guidance is 15,500-16,900 boe/d, and capital expenditures guidance is $360 to $400 million. PVA said it expects to drill up to 62 (39.3 net) Eagle Ford wells this year, compared to current guidance of 38 (28.8 net) wells. “In light of this acquisition and the positive results of additional wells drilled in Lavaca County, we have decided to retain our full working interest of about 94% in 17 out of 22 drilling units in Lavaca County, which we were previously considering selling,” PVA said.

The assets being sold represent all of MHR’s interests in the Eagle ford in Gonzales and Lavaca counties, MHR said. The deal is structured as a sale by MHR of its 100% interest in Eagle Ford Hunter Inc. with an effective date of Jan. 1, 2013. MHR said it would use proceeds to reduce debt.

“The announcement of the sale of this property today is ‘bitter sweet’ for our management and board,” said MHR CEO Gary C. Evans. “Our company’s entry into the Eagle Ford Shale initially began when we acquired Sharon Resources Inc. back in September 2009 for $2.35 million, which was an all-stock transaction that resulted in 5.6% dilution of the company at that time.

“Since the acquisition of Sharon, now known as Eagle Ford Hunter, the company has deployed approximately $263 million of new capital for development in the Eagle Ford and has generated approximately $80 million of net cash flow from this region as of the beginning of this year. Based on the $401 million purchase price announced today and the net investment to-date, this implies over a two-times return on capital invested over the past three years and an [internal rate of return] in excess of 80%.”

MHR will continue to own about 7,000 net mineral acres in Fayette, Lee and Atascosa counties in South Texas. The company is participating in a new horizontal Pearsall Shale well with Marathon Oil Corp. that is currently drilling in Atascosa County.

PVA said it will finance the acquisition with debt, equity and cash. The equity financing may consist of the sale to MHR of 10 million shares of PVA common stock at $4.00/share. PVA has obtained a senior unsecured bridge facility from the Royal Bank of Canada and Wells Fargo to backstop financing requirements, the company said. It also said it intends to offer in a private placement $400 million of senior notes due in 2020 with net proceeds to be applied to the Eagle Ford acquisition.

Whitehead was asked during the conference call whether PVA was considering asset sales in order to reduce post-acquisition debt. He said nothing was in the works but added that integration of the PVA and MHR pipeline assets in the Eagle Ford would make for an attractive system that could one day see a midstream buyer.

Standard & Poor’s Ratings Services (S&P) assigned issue-level and recovery ratings (“B-” and “5,” respectively) to the proposed notes. The ratings agency’s “B” corporate credit rating on PVA and “positive” outlook are unaffected. “The ratings on PVA reflect what we view as the company’s ‘aggressive’ financial risk and ‘vulnerable’ business risk,” S&P said. “The ratings incorporate the company’s relatively modest asset base and production, exposure to natural gas (still 55% of pro forma reserves) and aggressive capital spending strategy due to its strategic shift to oil and liquids production. These risks are mitigated by a decent level of geographic diversity, an increasing profitability due to the ramp-up in oil production, and an ‘adequate’ liquidity profile.”