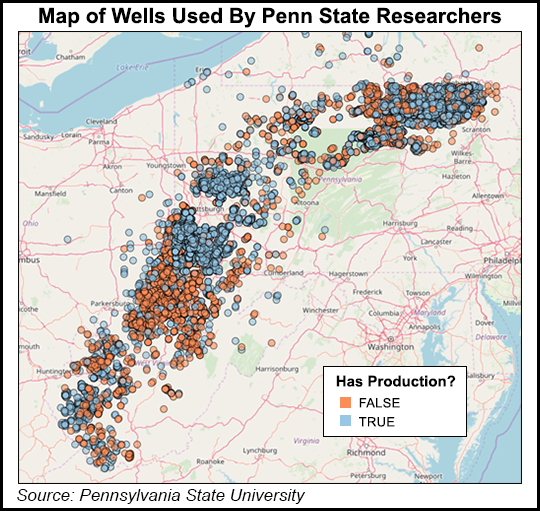 The method leans entirely on historical well production data from across the state rather than the more costly practice of relying on a combination of factors â€“ well production data and geological tests â€“ to stake a well, according to research published in the journal SPE Reservoir Evaluation & Engineering.

“Since our method mostly takes production data, it’s very economical,” said graduate student Zhenke Xi, co-author of the research paper. “Other data, such as porosity and permeability, is expensive to collect. Our method has proven to be very effective using only production data. Getting this data is much easier and more economical than gathering geological data.”

The researchers were able to estimate available gas in untapped areas by using well production data from more than 5,600 existing wells that stretch from Northeast Pennsylvania to West Virginia. They only used wells with more than two years of production logs and “assigned a decline curve analysis” for each well, the university said in announcing the findings.

The decline curves were then applied to the region, allowing researchers to forecast the amount of gas that would be generated over time if a new well was spud in a particular area. The researchers validated the findings using geological maps created from core samples.

Morgan said the method was almost as effective at estimating natural gas resources as other costly traditional methods that utilize geological data.

The research team created a heat map of available natural gas within the Marcellus that may be viewed on an interactive website, which was also created as part of the project. The website, the university said, could prove useful for industry experts and property owners as it can be used to estimate well productivity.

Natural gas production has skyrocketed across the region in recent years as a result of development in the Marcellus, Utica and Upper Devonian shales. Volumes from Ohio, Pennsylvania and West Virginia have turned Appalachia into the nation’s largest gas-producing basin, with the Energy Information Administration’s latest Drilling Productivity Report forecasting production of 32.61 Bcf/d this month.

Researchers are now focused on fine-tuning their data to improve accuracy. The research was funded by a grant from the George H. Deike Jr. endowment fund at the university, which supports innovation. The team also utilized data contributions from Enverus, formerly Drillinginfo.