Mexico national oil company PetrÃ³leos Mexicanos (Pemex) on Tuesday reported it has discovered two shallow water oilfields off the coast of Tabasco state in the Gulf of Mexico. 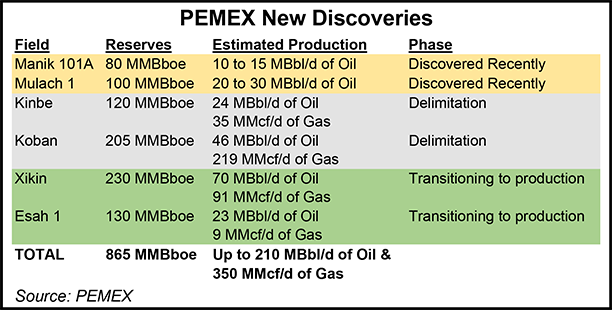 The two fields hold a combined estimated total of 180 million boe of proven, probable and possible, i.e. 3P, reserves, making the discovery one of the 10 largest shallow water finds in the world over the last 15 years, said Energy Minister Pedro JoaquÃ­n Coldwell, who also spoke at the event.

However, the field reserves pale in comparison to the 2017 Zama offshore discovery in Mexican waters, which is estimated to contain 1.4-2 billion boe in place.

Welligence Energy Analytics’ Pablo Medina, vice-president of analysis, tweeted on Tuesday that the Manik-Mulach discovery was “underwhelming to say the least.”

Still, TreviÃ±o and Coldwell, who were appointed under current President Enrique PeÃ±a Nieto, expressed optimism about the near-term prospects for exploration and production (E&P) in the country. Coldwell said he expects the current freefall in Mexican oil and gas production to be reversed within two years.

PeÃ±a Nieto will be replaced on Dec. 1 by President-Elect AndrÃ©s Manuel LÃ³pez Obrador, whose oil and gas policy proposals center around restoring Pemex to its former glory by increasing its exploration and production budget and its autonomy in choosing joint-venture partners.

LÃ³pez Obrador’s picks to replace TreviÃ±o and Coldwell are Octavio Romero Oropeza and RocÃ­o Nahle, respectively. Romero Oropeza is an agronomist and longtime ally of LÃ³pez Obrador with no background in the oil industry, while Nahle is a legislator and former Pemex engineer focused on the downstream segment.

TreviÃ±o also provided updates on the Kinbe, Koban, Xikin and Esah shallow water discoveries made in recent years. The Kinbe light oil play was discovered in 2011, while the Koban natural gas field was discovered in 2016. Delineation has been completed for Kinbe and is underway for Koban.

The Xikin light oil and Esah were both discovered in 2015, and are in the development phase.

These four fields, combined with the two new ones, are expected to contribute up to 210,000 b/d of oil and 350 MMcf/d of gas production over the coming years, TreviÃ±o said.