Petroleos Mexicanos (Pemex) plans to drill a test well later this year for the offshore Zama reservoir, a private sector-led discovery that may overlap with a neighboring block controlled by the state oil company. 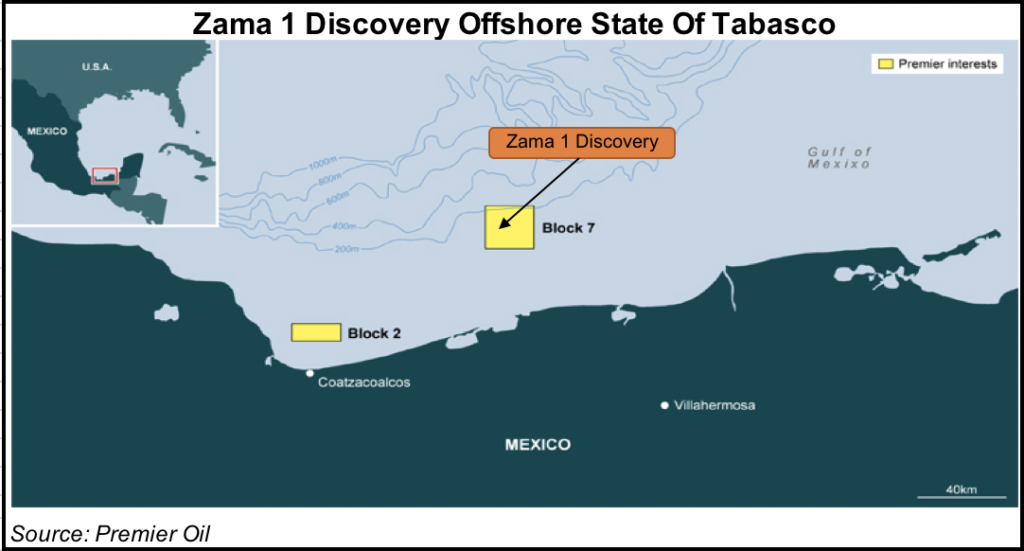 The company has launched a rig tender, “and the winning bidder is to be announced around mid-June,” a Pemex spokesperson told NGI. “Drilling is expected to start at the end of August. The work plan for the area entails the drilling of one well.”

A private sector consortium, led by Houston-based Talos Energy LLC, announced the Zama discovery last year on the shallow water Block 7, off the coast of Tabasco state in southern Mexico.

The consortium said at the time the discovery could extend into a neighboring area operated by Pemex, and it has been in talks with the national oil company (NOC) since then. Talos operates Block 7 with a 35% interest, while UK-based Premier Oil plc holds a 25% stake and Sierra Oil & Gas has the remaining 40%.

The Pemex tender is to secure a rig “for the Asab-1 well, which will test the extent of the Zama discovery on the adjacent block,” Premier said in a trading and operations update on May 16.

Talos submitted an appraisal program to Mexican regulators in April, and the consortium now expects to spud the first Zama appraisal well in 4Q2018.

“The objective of the appraisal program, which comprises two back-to-back wells and one side track, is to confirm the oil water contact as defined by the seismic flat spot and to prove the detailed distribution of the reservoir,” according to Premier.

The Zama well “was the first pure wildcat offshore Mexico by anyone other than Pemex in almost 80 years,” according to a recent report by Wood Mackenzie analysts.

The project is also a test case on the regulatory front. The Energy Ministry (Sener) issued Mexico’s first unitization rules last month, and industry observers expect Zama to be a case study for how the new regulations are put into practice.

Before the rules were put into place, the Mexican oil and gas sector lacked any clear legal precedents for shared discoveries within the country because of Pemex’s decades-long monopoly in the other exploration and production (E&P) space prior to the 2013-2014 energy reforms.

“Driven by Mexico’s attractive geological potential, dozens of E&Ps, ranging from supermajors and foreign NOCs to regional independents and new local operators, are now present and hold substantial acreage in what was previously Pemex’s private playground,” according to Wood Mackenzie.

Talos and its partners won Block 7 under a production sharing contract (PSC) during the first round of E&P licensing auctions in 2015. Round 1 also included a separate auction for shallow water development blocks with previously discovered fields that Pemex was unable to exploit.

Along with Zama, three shallow water projects from Round 1 are now “leading the charge” to halt Mexico’s oil production declines by the early 2020s, Wood Mackenzie analysts said.

One of those, Eni SpA’s Amoca field, is expected to become Mexico’s first international oil company project with offshore production by 2019. The other two are Hokchi Energy’s Block 2 and Ichalkil-Pokoch, which is on a block owned by a consortium of Houston-based Fieldwood Energy LLC and Mexican E&P PetroBAL. Like Zama, all three projects are in the Sureste Basin, along the Gulf Coast of southern Mexico.

“All areas were won under relatively aggressive PSC bids, but low development costs still make for attractive economics that will speed up first oil,” according to Wood Mackenzie. “The fields will all be in production by the early 2020s, contributing over 1 billion bbl of production to Mexico through the 2030s. Of the four, only Ichalkil-Pokoch targets carbonate formations, like Pemex’s massive producers Cantarell and Ku-Maloob-Zaap.”

Mexico is now in the third round of upstream auctions. Round 3.1 in March awarded 16 of 35 shallow water blocks on offer. Premier Oil secured three: blocks 11 and 13 in the Burgos Basin with solo bids, and Block 30 in the Sureste Basin in a joint bid with Germany’s Deutsche Erdoel AG and Sapura Energy of Malaysia.

“The forward plan for Block 30 includes 3-D seismic acquisition and reprocessing the existing 3-D seismic across the Wahoo prospect, which exhibits direct hydrocarbon indicators and is analogous to the Zama discovery,” Premier said. “In the Burgos Basin, Premier will undertake an environmental base line study across its two new blocks prior to reprocessing the existing seismic data during 2019.”

Two more auctions for onshore acreage, including some unconventional blocks, are scheduled for Sept. 27.

The winning bidders from all of Mexico’s licensing rounds so far have committed to drilling 63 exploration and appraisal wells over the next four years, according to Wood Mackenzie.

“Evenly split, these wells could mean total spend of $5 billion for deepwater and $2.5 billion for shallow water developments if all are drilled,” analysts said. “We estimate these wells could yield up to 20 discoveries, assuming most wells are exploration and success rates are around 30% — the global average for frontier plays.”

Although the shallow water projects should help mitigate production declines, longer-term development in deepwater regions “will ultimately hold the key to pushing Mexico’s production back to sustained growth into the next decades.”

A second deepwater auction, Round 2.4 in December 2017, tendered another 19 blocks to 11 different companies. CNH signed the Round 2.4 contracts earlier this month.