Petroleos Mexicanos (Pemex) has made its largest onshore discovery in the last 15 years at a well in the southern state of Veracruz, Mexican president Enrique Pena Nieto announced at the end of last week. 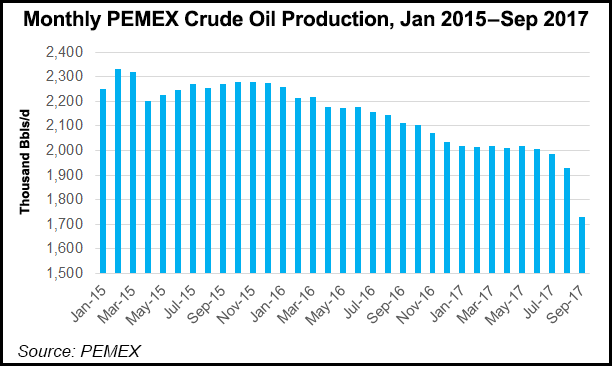 The find at the Ixachi-1 well is estimated to hold an original volume of 1.5 billion boe of light oil and natural gas, which could represent some 350 million boe in proved, probable and possible (3P) reserves, according to the state-owned oil company.

Based on preliminary studies, Pemex said further testing and exploration could increase and even double the size of the reservoir.

The discovery is located in the Veracruz basin, and its volume is similar to an offshore find by private operators at the shallow water Zama-1 well just a few months back, Pemex said. The Zama discovery, announced by Houston-based Talos Energy LLC and its partners in July, is estimated to contain between 1.4 billion and 2 billion boe of light oil and some associated gas.

Pemex will be able “to start producing oil relatively soon, and at a much lower cost due to the field’s location,” according to a press release from Pena Nieto’s office. “It is close to existing Pemex facilities, which will make it easier to process the crude extracted” from the field. CEO Jose Antonio Gonzalez Anaya told Bloomberg Friday that production could start at the end of 2018 or in 2019.

Pemex is the sole owner and operator of the Ixachi-1 well, which is on an exploration and production (E&P) block that the Mexico government assigned to the company during “Round 0” of the 2013-2014 energy reforms.

The Mexican upstream regulator, the Comision Nacional de Hidrocarburos (CNH), approved drilling plans for Ixachi-1 back in September 2016. CNH officials noted at the time that the well was of high strategic value and potentially high impact.

“Over the short and medium term, this discovery will help meet the country’s demand for wet gas and light oil,” Pemex said Friday.

Most of the national oil company’s oil and gas output comes from its offshore projects, where the largest fields are in decline.

Pemex is courting private partners to help develop new E&P assets and replace lost production. At the most recent farmout auction, it awarded two of the three contracts on offer, both in mature onshore fields.

Pemex’s hydrocarbons output in October rebounded from the previous month but continued on its yearly downward trend, according to the latest data from its upstream subsidiary, Pemex Exploracion y Production (PEP).

Despite the dips in September, Pemex is still on track to hit its annual production goal of 1.944 million b/d, executives said during an earnings call last month.

The company reported a net loss of 101.8 billion pesos (US$5.6 billion) in 3Q2017 on natural field declines and back-to-back earthquakes and repeated hurricanes that battered Mexico during the quarter.