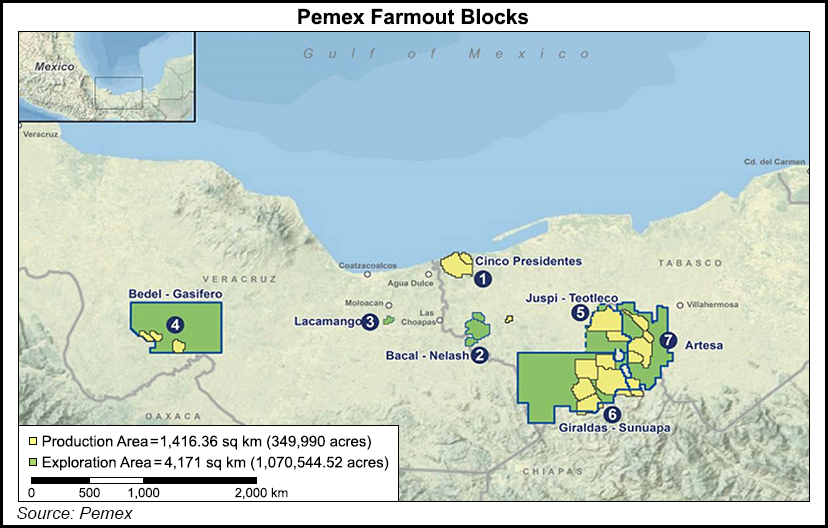 At a farmout day event last Wednesday in Houston, officials also revealed the fiscal terms for the license contracts that are to be awarded in the upcoming auction, which is offering stakes in seven onshore blocks held by Pemex in southern Mexico.

The farmout areas cluster together multiple fields in the states of Veracruz, Tabasco and Chiapas. All seven blocks are producers, and they also contain a combined 392 million boe of proven, probable and possible, i.e. 3P, reserves and 683 million boe of unrisked prospective resources.

“All of them have the opportunity to increase their production through artificial lift systems, secondary enhanced recovery and, of course, in-field and step-out wells,” said Pemex’s Ulises Hernandez Romano, director of resources, reserves and partnerships.

Pemex would retain a 45% working interest in each of the seven blocks, but cede operating and exploration rights to the winning bidders. Companies may submit individual offers, or joint bids in which the operating partner must hold a minimum 30% interest. Bids are due Oct. 31.

At the Houston event, Mexican authorities also disclosed new fiscal terms that will debut with the farmout tender. Officials said the changes were intended to simplify the bidding process.

“The key element here is that we are defining the additional royalty as a fixed amount,” rather than setting minimum and maximum rates as in past auctions, said Alberto Torres Garcia, undersecretary for revenues at Mexico’s finance ministry (SHCP).

All royalties from Mexico’s exploration and production (E&P) contracts are paid into a sovereign oil fund known as the FMP.

For the upcoming farmout auction, the royalty rate is 15% for oil-rich areas, or six of the seven blocks on offer. For the seventh natural gas-rich block, Giraldas-Sunapa, SHCP has set a rate of 6%. These rates are in addition to a base royalty on each contract, which is indexed to international commodities prices.

With the additional royalty set in stone, the sole determining variable in the October bidding will be a cash bonus payment that each company must include in its economic offer, Torres said.

In past auctions, the bonus was a bid as a single amount, usually used for tie-breakers. In this latest round of farmouts, all bidders are required to offer a minimum cash payment to Pemex, plus an additional bonus that will be used to determine the winner. The bonus is to be split between Pemex and the FMP.

Pemex would determine both the minimum payment amount and the percentage split for the additional bonus. “In the next few weeks we should have the final numbers,” said Cesar Fernandez, the company’s deputy legal director for projects and business.

The October farmout would be the largest auction of its kind in Mexico to date. Pemex has awarded only three farmouts previously: the deepwater Trion project in 2016 and two onshore mature fields at a joint auction held last year.

The blocks currently produce a combined 43,000 b/d of crude and 228 MMcf/d of gas, according to Pemex.

“Most of them are in the state of Tabasco, very near to the areas where we have had oil finds in the shallow waters of Mexico,” said Aldo Flores Quiroga, undersecretary for hydrocarbons at Mexico’s Energy Ministry (Sener).

The 3P reserves on the blocks include around 189 million bbl of crude and 950 Bcf of natural gas.

The largest prospect is Bedel-Gasifero in Veracruz, covering an area of 1,100 square kilometers (425 square miles). The block produces 13,700 b/d of oil and 82 MMcf/d of gas and holds 119 million boe in 3P reserves and 223 million boe of prospective resources.

“The main focus of this block is middle Miocene sandstones, where we have oil and non-associated gas,” Hernandez said. “The block has its own independent [processing] facilities with capacity available to incorporate further production.”

Three other blocks â€“ Artesa, Giraldas-Sunuapa and Juspi-Teotleco â€“ are close to the Cactus gas processing complex in Chiapas. Cinco Presidentes, Bacal-Nelash and Lacamango are all near the La Venta processor in Tabasco. Pemex owns both plants.

All seven blocks are near the southeast Yucatan Peninsula, which suffers from persistent natural gas shortages. The price of gas in southeast Mexico averaged 76.887 pesos/gigajoule, or $4.422/MMBtu, during April, according to energy regulators.

The farmout auction is scheduled to occur roughly one month after a joint E&P licensing round for conventional and unconventional onshore blocks on Sept. 27.

Pemex has launched an aggressive farmout program to court outside capital and know-how to develop the E&P areas it was directly assigned as part of the 2013-2014 energy reforms. These assets include long-term deepwater projects, heavy oil and frontier areas in shallow waters, and mature onshore fields, Hernandez said.

The executive also said Pemex would seek partners for some of the blocks it has won in the government’s nine licensing rounds to date. Specifically, the state company intends to hold farmouts on the blocks in which it holds a 100% working interest.

These areas include one shallow water block in the Sureste Basin and two deepwater blocks, one in the Perdido Fold and the other in the Salina Basin.