Mexican state oil company Petróleos Mexicanos (Pemex) could hinder the country’s economic recovery prospects if the government does not shift course, according to new analysis by Rice University’s Baker Institute for Public Policy. 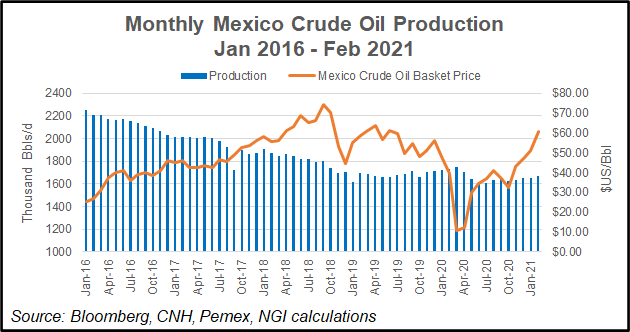 While each pillar relies to a large degree on the health of the global economy, domestic policies have a major impact as well, especially on Pemex, the authors said.

“In recent years, Pemex has had a detrimental impact on Mexico’s economy,” the authors said. “For decades, the state-owned oil company financed the federal government instead of reinvesting the resources it generated, but those days are over.”

Still, President Andrés Manuel López Obrador “has counted on the company to generate economic growth through the supposition that oil production could increase. That has not been the case.”

Pemex oil and natural gas production has continued to slide under López Obrador, and its financial losses have widened. Pemex posted a staggering $23 billion loss for 2020, versus a $19 billion loss in 2019.

“If we add in the fact that the federal government has heavily subsidized Pemex so that it could continue working as it has been, with no plans for investment or the development of new technology, the results are catastrophic,” Payan and Rodríguez-Sanchez said.

They also noted that Mexico’s economy has contracted by about 9% since López Obrador took office in 2018, “the largest economic decline since 1932.”

The authors said, “This collapse is primarily due to the government’s inadequate public health strategy in dealing with Covid-19 and the absence of an economic stimulus response to address the effects of the pandemic on the country’s gross domestic product (GDP).”

They cited that Mexico’s economic rescue package in the wake of the pandemic has been among the smallest in Latin America, at about 1.1% of GDP.

By comparison, federal support measures for Pemex could cost an estimated 1.4% of GDP in 2021.

In other words, “the recovery of Mexico’s economy in 2021 depends in large part on the fate of this company,” Payan and Rodríguez-Sanchez said. “If the federal government continues to financially support Pemex, it will seriously affect both the national economy and its fiscal soundness.

“Putting resources into Pemex is an inefficient use of money with no positive effects on the economy, since there is no plan to restructure it financially.”

Mexico’s government in February announced a 73.3 billion pesos ($3.64 billion) stimulus for Pemex to go toward paying its production sharing duties, known as DUCs under the Spanish acronym. This was in addition to reductions of the DUC rate from 65% of production to 58% in 2020 and 54% in 2021.

“If these resources were used to support businesses and people affected by the pandemic, the positive impact on the economy would be greater,” the Baker Institute researchers said.

“Thinking optimistically,” they wrote, “Pemex could become an important input for the economy if oil prices went up dramatically, but this would also depend on worldwide recovery. For now, however, it is a drag on the country’s GDP.”

The energy-intensive manufacturing sector, meanwhile, has stayed relatively resilient and appears poised for a strong year in 2021, the authors said.

“Despite the pandemic and the slump in the U.S. economy (the main market for Mexican exports), the manufacturing sector lost strength only in March and April of 2020, recovering in the following months,” they said. “As the U.S. economy recovers this year, it is expected that Mexican exports will trend upward again, to levels greater than those seen in 2019.”

Pipeline natural gas flows from the United States to Mexico have continued to rise through the pandemic as well, amid stagnant production by Pemex and resilient demand from the industrial and power generation segments.