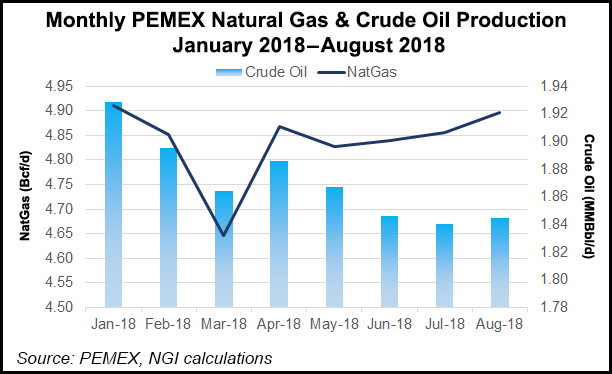 The debt issuance was 5.9 times oversubscribed, the state-owned operator said.

Pemex expects the proceeds to be used to reduce negative equity on its 2018 balance sheet to 49.4 billion pesos ($2.6 billion) from 79.4 billion pesos originally approved by the national congress.

Pemex, which reported a net loss of nearly $9 billion in the first half of 2018, said it maintained communication with the transition team of President-Elect Andrés Manuel López Obrador throughout the process. He takes office Dec. 1.

Pemex, which is cited by credit ratings agencies as the world’s most indebted oil company, reported net debt of 1.96 trillion pesos (minus $104 billion) as of 2Q2018.

Analysts and credit ratings agencies including Moody’s Investors Service have warned that López Obrador’s energy sector proposals threaten to undo improvements made since 2016 in Pemex’s operational efficiency and credit metrics.

The proposals include constructing a $8 billion refinery in the president-elect’s home state of Tabasco, increasing the Pemex exploration and production (E&P) budget and a drilling services tender planned in December to shore up oil and gas output from mature legacy fields in the southeastern part of the country.

López Obrador has been critical, meanwhile, of bid rounds for operating stakes in upstream blocks, a stable of the current government’s 2013-14 energy reform, which he has blamed for recent declines in hydrocarbon production and investment.

The president-elect has also stated his intention to increase Mexico’s oil output by 600,000 b/d by 2024, a goal widely cited by experts as unrealistic. His preference to try and increase production through the awarding of oilfield services (OFS) contracts is risky and short-sighted, according to Gonzalo Monroy, founder of local energy consultancy GMEC.

Monroy told NGI’s Mexico GPI that the incoming government’s plan to address the issue of oil production, which has plummeted to 1.8 million b/d from 3.4 million b/d in 2004, is to “throw money at it.

“But that is not the issue and that is not the solution to this problem,” he said, explaining that the prudent course of action is for Pemex to share E&P risk with the private sector through the tools of the reform, namely bid rounds farming out stakes in Pemex acreage.

“They’re going to have a little bump [in production] in the first two years, especially in the mature fields…but it’s going to be insufficient.”