The Mexican state and natural gas company Petroleos Mexicanos (Pemex) on Monday reported a net loss in the fourth quarter of nearly 352.3 billion Mexican pesos ($19 billion), compared with $3.9 billion in the year-ago period. 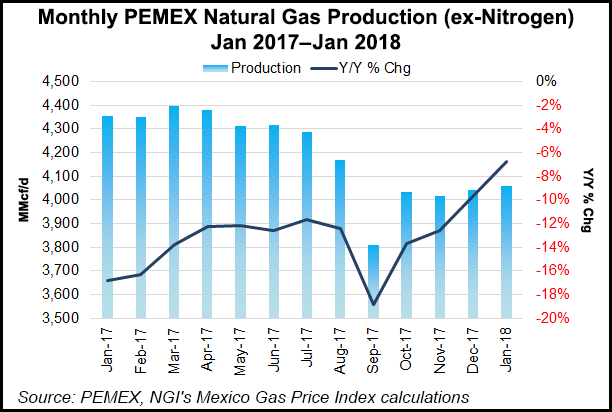 The net loss for the full year was $17.8 billion, up from a $10.2 billion net loss in 2016. Despite the dimension of the losses, however, Pemex executives are far from dismayed.

In a message to accompany the report on the results, David Ruelas, the corporate financial director, said: “Pemex has stable finances. Since 2016 we applied conservative policies and austerity measures, and had taken full advantage of the financial flexibility and tools provided by the energy reform.

“Despite the slow and constant recovery of international oil prices, we’ll keep up with these policies, in track with what we have been doing.”

At least 151 billion pesos ($8 billion) of the losses were attributable to foreign exchange movements as a result of the depreciation of the Mexican peso against the U.S. dollar, Ruelas said.

The 2013-14 energy reform that ended almost eight decades of state monopoly exercised by Pemex has unquestionably opened new horizons for Pemex, Robert Cejudo, director of treasury, said in a conference call with analysts.

He described 2017 as “a year of stabilization.”

Pemex won four blocks in the fourth of Round Two of the reform’s upstream series of auctions, in the deep waters of the Gulf of Mexico, he noted. Pemex won two of the blocks alone and two in consortium, one with Royal Dutch Shell plc, the other with Chevron Corp.

In November, Pemex announced the Ixachi discovery, its largest onshore find In 15 years, about 70 kilometers (44 miles) south of the port of Veracruz. Ixachi is surrounded by existing infrastructure and has proved, probable and possible, or 3P, reserves of 366 million boe, including deposits of wet gas and condensates at 6,000-7,000 meters below sea-level.

Pemex crude and natural gas production continues to slip, but the target set for crude 2017 was met with the smallest of margins and the lowest in 40 years, according to the quarterly results.

As a 100% state-owned company, Pemex has no equity to sell in the capital markets and hence its conference calls are usually low-key affairs.

Monday’s was overshadowed by news that a high-level Mexican delegation, including the Pemex Director-General Carlos Trevino, left Sunday for talks in New York City with financial firms.

Pemex said Trevino, appointed late last year, was aiming to “continue improving Pemex’s placement as a globally profitable company.” What raised eyebrows, however, was that the head of the Mexican delegation, Jose Antonio Gonzalez Anaya, is the Mexican finance minister and former head of Pemex.

The timing was seen as significant, as Mexico’s presidential election gets underway, with mixed and often confusing signals to investors. Some political leaders have been accusing others of planning deflate the reform, if not abandon it.

Pemex, in reporting the trip to New York, underlined — though it hardly seemed necessary — that Trevino “will endorse the commitment of PetrÃ³leos Mexicanos to continue implementing the energy reform.”

Since the energy reform, private operators have begun to produce oil and gas, mostly in areas abandoned by Pemex in the past and with extremely marginal results. The first fruits of the reform of any significance in terms of production are not expected to emerge before late next year.

The Energy Ministry’s Prontuario, a statistical compendium, reported that Mexico’s imports of natural gas in December totaled 4.02 Bcf/d, including 0.585 Bcf/d of liquefied natural gas from the terminals at Altamira on the nation’s Gulf Coast, and Manzanillo on the Pacific.

Mexico’s total imports, together with 3.877 Bcf/d of production, amounted to an available supply of gas in Mexico in December of 7.897 Bcf/d. However a substantial, but unreported, portion of the production is absorbed by Pemex for its use in secondary recovery injection and for its petrochemical complexes.