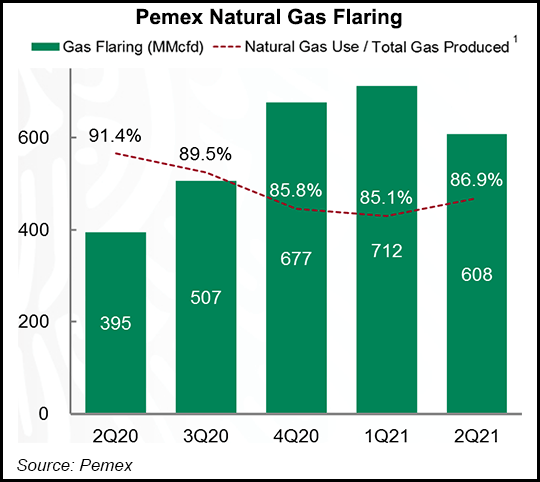 During an earnings call Wednesday, company executives attributed the production gains to recovery efforts at mature fields, in addition to growing production from 20 “priority” or new fields.

Executives said that the strategy to focus on shallow water and onshore fields instead of on deepwater has been “a great success for the company.” Reserves now stand at 7.8 billion boe, compared to 7.4 billion boe at the end of 2020.

Production was up 2.4% in the first half, “which we haven’t seen in two decades,” executives said. Pemex sees oil production hitting 2.186 million b/d in 2024.

Gas production was 3.658 Bcf/d in the quarter, compared to 3.528 Bcf/d in last year’s second quarter. Associated gas accounted for 73% of total production.

Executives singled out production from the southeastern Ixachi and Quesqui  priority fields. In June, gas-rich Ixachi in Veracruz state was the third-largest producing field in Mexico, with output of 201 MMcf/d. This was up from 70 MMcf/d in the same month a year ago. Nearby Quesqui produced 196 MMcf/d in June, up from 29 MMcf/d in June 2020.

CEO Octavio Romero said during the call that a downgrade by ratings agency Moody’s Investors Service just hours before results were released showed a lack of professionalism and was “shameful.”

Moody’s said the latest rating downgrade was because of “high liquidity risk and increasing business risk as the company faces high debt maturities while it expands its refining capacity and production.”

While executives said Pemex will “continue getting government support,” including a cash injection of 36 billion pesos, or $1.8 billion, in August, overall debt swelled to $115 billion in 2Q2021.

Crude oil processing improved to 666,000 b/d from 631,000 b/d in the year-ago period, but it was still significantly below national needs. During the quarter, Pemex added more refining capacity to its portfolio with the purchase of Royal Dutch Shell plc’s share in the partnership that owns the Deer Park, TX, refinery southeast of Houston.