Petroleos Mexicanos (Pemex) revealed both aspects of its new-found dual personality under Mexico’s energy reform during the third quarter. 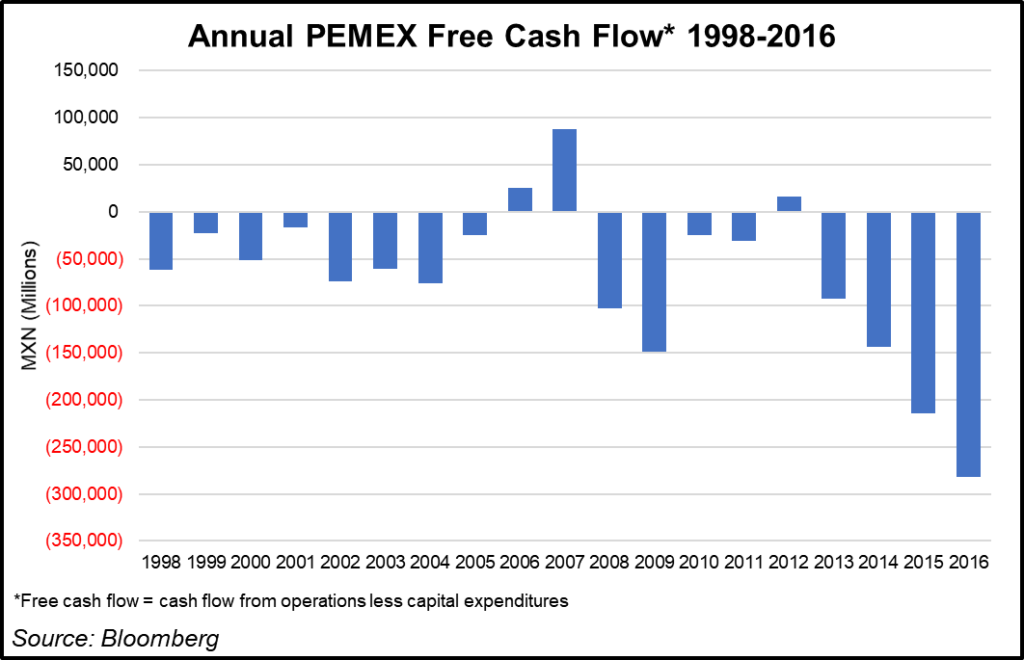 In its role as a valued state utility, the company guaranteed fuel supplies throughout the nation amid hurricanes Calvin, Harvey and Katia, which battered the coasts of several states, and the earthquakes of September 7 and 19, Pemex said Thursday in a report to the Mexico Stock Exchange.

Pemex said it has provided the Energy Ministry with a list of seven upstream clusters for approval to be farmed out to exploration and production (E&P) companies under the terms of the 2013-2014 energy reform.

In early October, two of three oil and natural gas E&P farmouts on offer with Pemex were snapped up in an auction organized by upstream regulator, the National Hydrocarbons Commission (CNH).

Crude output was 1.884 million b/d in the third quarter, down by 11.9% from 3Q2016. However, Gustavo Hernandez, director of resources and associations at Pemex E&P, in a conference call that followed publication of the results, said that the quarterly result was in line with the annual goal of 1.944 million b/d, given the bad weather and the quakes.

Natural gas production (including nitrogen content) fell 14% from a year ago to 4.857 Bcf/d. Associated gas production dipped because of the natural decline of fields and an increase in fractional water flows of key wells, Hernandez said.

During 3Q2017, the key units of non-associated gas production — Veracruz in the southern Gulf of Mexico (GOM) and Burgos Basin across the border from Texas — were even more severely hit by natural declines of fields in production.

On a more positive note, gas flaring was sharply reduced, dropping to 3.3% of total production from 8.8% a year earlier.

Pemex reported six upstream discoveries. Comalcalco is onshore in the state of Tabasco, the others in shallow waters of the southern GOM. Total initial production of crude and condensates for all five was 10,863 b/d of oil and 34,200 MMcf/d of gas.

The production and processing margins of the six Pemex refineries have been falling for years, but Carlos Murrieta, who heads the downstream subsidiary, Pemex TRI (Transformacion Industrial), said only 647,000 b/d was processed in the quarter, a 23.8% decline year/year.

The Madero refinery, on Mexico’s northern Gulf Coast, has been closed for maintenance since August, Murrieta said.

“This is the first time a Pemex refinery has been totally shut down for scheduled maintenance,” he said on the conference call. However, he said it was necessary, not only to bring the refinery back into production but also to turn it into a profit. Some Madero units are to be reopened shortly, while the entire refinery is expected to be restored to capacity by late this year.

The Salina Cruz refinery, the only one of the six on the Pacific Coast, was a victim of the climate and earthquakes. Problems began after flooding caused by Tropical Storm Calvin for much of June and July, while the Sept. 7 earthquake forced a new setback. Salina Cruz is now being evaluated with a view to renewing operations, the company said.

In contrast with the severe problems encountered by its refineries, Pemex reported less difficult challenges in natural gas processing, which still fell by 11.4% year/year.