As Mexico’s energy deregulation continues to ramp-up, state-owned Petroleos Mexicanos (Pemex) is being asked by the Mexican government to produce more crude in 2018 while reducing its spending. 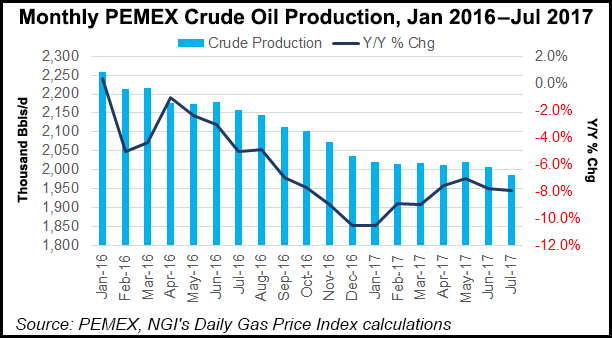 The federal budget for next year stipulates that the exploration and production (E&P) company will have to produce 1.983 million b/d of crude, about 39,000 b/d more than this year’s target.

In practical terms, Pemex can achieve its target largely by concentrating on the low-hanging fruit in the nation’s upstream, said Luis Miguel Labardini, a partner in the Mexico City-based consultancy Marcos y Asociados.

“What we are likely to see is a restructuring of Pemex operations as it concentrates on low-cost production in shallow waters,” Labardini said.

Exploratory drilling is likely to be largely left to the private-sector companies that have won blocks in the rounds One and Two upstream auctions that followed the 2013 energy reform. Under the reform, Pemex collaborative farmout agreements with international E&P companies are seen as key to the company’s future.

Natural gas production is not a priority for Pemex, Labardini said, given the low cost of imports from the United States and a large backlog in the construction of pipelines to transport them.

The debate on the federal budget is due to begin shortly in the Mexican Congress. To judge by experience of recent years, it may be concluded by the middle of next month.

As in most countries, Mexican legislators often push for more funds for pet projects and on issues such as public security. Adjustments in Mexico on the proposals for energy, however, are usually minimal.

In addition, the sector’s principal regulators have earned brownie points. The budgets of the National Hydrocarbons Commission, or CNH, and the Energy Regulatory Commission, the CRE, have been reduced by about 20% each.

“They’ve had their allocations cut because their income from the fees for their services in the upstream and power auctions have been a lot higher than expected,” said Labardini. “That’s good news for the government because it’s expected to face a massive bill for next year’s presidential elections.”

The Mexican government foots most of the bill for the political parties’ electoral campaigns.

Meanwhile, the decline in Mexico’s natural gas production appears to have steepened. Operational reports from Pemex indicate output in August was 5.037 Bcf/d, a decline of 11.4% compared with the same month of last year and the lowest in more than 11 years.