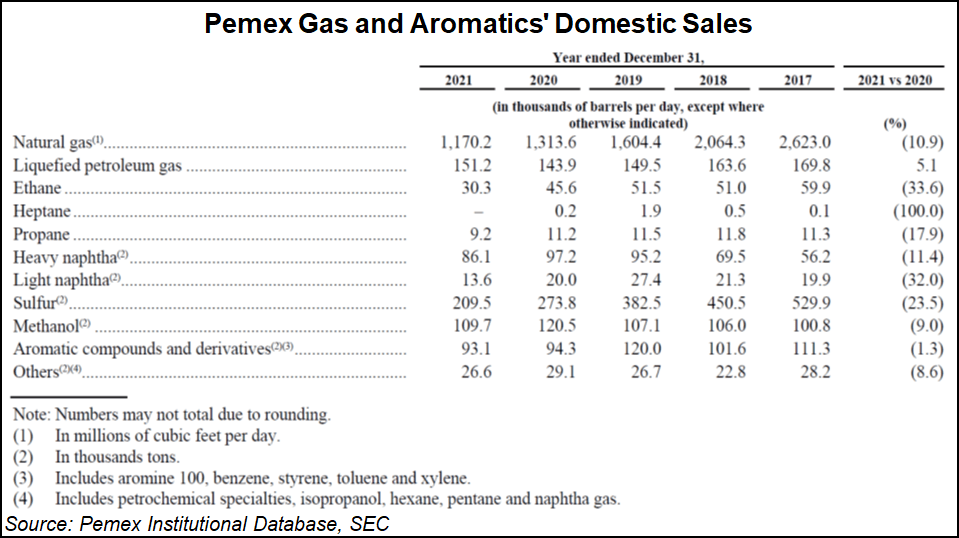 Sales dropped from 1.313 Bcf/d in 2020 to 1.170 Bcf/d last year, Pemex said. This decrease “was mainly because private companies have the option to purchase natural gas from other marketers,” according to the filing, which was for full-year 2021.

“To reverse the loss of the natural gas market, for the July 2021-June 2022 cycle, a commercial strategy was designed based on maintaining competitive prices in the domestic market to recover customers that once belonged to Pemex,” the company said.

In 2021, given the higher price environment, the value of natural gas imports by Pemex increased by a whopping 183.7%, according to the filing.

Last year, Pemex imported 904 MMcf/d from the United States, up 6% year/year. Pemex also cited the need for more imported gas due to “the lower availability of direct gas from Pemex Exploration and Production fields and the reduction in dry gas production from cryogenic units.”

Given last year’s import volume from the United States, this would mean that Pemex accounts for around 15% of the country’s total natural gas imports.

Total Pemex natural gas production, however, decreased by 1.9% from 2020 to 2021, according to the filing. The company cited lower volumes from its legacy projects, including Cantarell, Ku-Maloob-Zaap (KMZ), and Burgos.

The Burgos project in northeastern Mexico was the largest producer of non-associated gas. Burgos accounted for 9.5% of natural gas production in 2021, or 444.5 MMcf/d. In 2021, 10 new wells were completed at Burgos, bringing total completed wells drilled to 8,014, of which 2,352 were in production.

The increase in gas flaring in 2021 was primarily due to the fire at the E-Ku-A2 platform, the filing said, “causing damage to the compression equipment resulting in a decrease in handling capacity of natural gas.” The company also cited the lack of transport infrastructure at the Quesqui and Ixachi fields.

Late last year, Pemex “implemented certain actions intended to significantly reduce gas flaring, including the restoration of damaged compression equipment from the E-Ku-A2 event, and the incorporation of new Quesqui field infrastructure,” according to the filing.