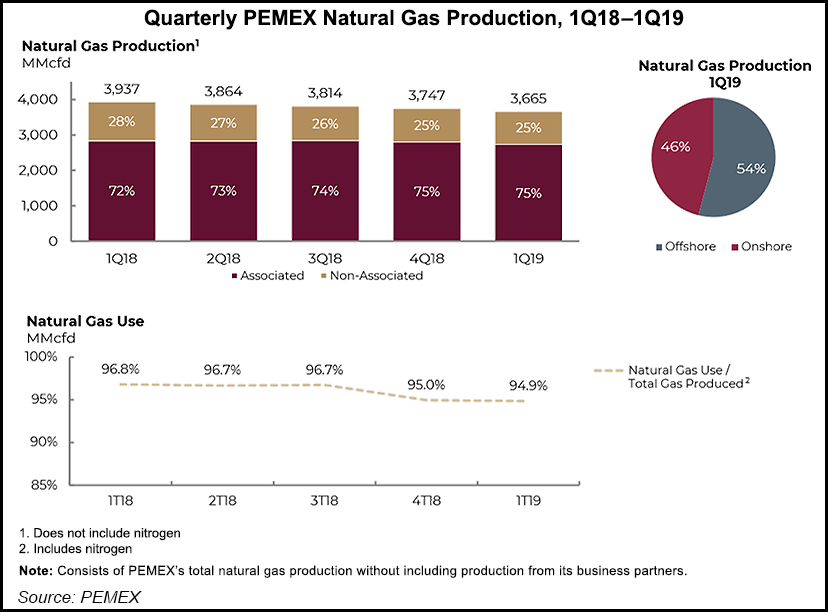 “Non-associated production decreased due to reallocation of resources to crude oil producer assets in the northern region,” the 100% state-owned company said in a quarterly earnings presentation on Tuesday.

The update follows a three-year postponement by President AndrÃ©s Manuel LÃ³pez Obrador of upstream bid rounds 3.2 and 3.3, which would have awarded contracts to develop blocks in the gas-rich Burgos Basin of northern Mexico.

LÃ³pez Obrador, who campaigned on a pledge to “rescue” the heavily indebted state oil giant, has called on Pemex to increase crude oil production to 2.4 million b/d by the end of his term in 2024, from current output of under 1.7 million b/d.

During Pemex’s first quarter earnings conference call Tuesday, CFO Alberto VelÃ¡zquez told analysts that the company is aiming for average as production of 3.486 Bcf/d in 2019, down from 3.886 Bcf/d in 2018. The goal for full-year average crude oil output is 1.725 million b/d, versus 1.833 million b/d last year.

“In 2019 the primary goal for Pemex is to halt the decline in our crude oil production,” Velazquez said. “We are still some ways from achieving our goal. It is important to note that the uptick we expect in production would occur during the fourth quarter of 2019, when our 20 new fields start producing.”

Natural gas production fell by 6.9% year/year to average 3.665 Bcf/d during the quarter, while production of crude and condensates dropped by 11.8% to 1.66 million b/d.

Associated gas output averaged 2.732 MMcf/d, down 105 MMcf/d from the year-ago period. The decline in associated gas production “can be explained due to water-oil contact at the Xanab field and natural decline of mature fields,” Pemex said.

“We estimate a favorable impact on natural gas production resulting from the improvement in crude oil production, specifically due to the development of the Ixachi field,” said Pemex’s JosÃ© Luis ChÃ¡vez, acting deputy director of exploration and production portfolio management.

Ixachi is one of 20 fields in southeastern Mexico for which Pemex is accelerating development, in order to start seeing incremental crude production by year-end.

Ixachi’s proved, probable and possible (3P) hydrocarbon reserves are estimated at about 1 billion boe, and is expected to supply up to 80,000 b/d of condensate and 630 MMcf/d of gas production, ChÃ¡vez said.

However, Talanza Energy Consulting’s David Rosales told NGI recently that even in the best-case scenario, Ixachi would only partially offset the natural decline of gas production from Pemex’s legacy mature fields. Amid declining gas output by Pemex, gas imports from the United States have increased steadily in recent years.

Excluding gas demand from Pemex for its operations, imports supplied 89% of Mexico’s natural gas demand in January, according to the ComisiÃ³n Nacional de Hidrocarburos (CNH).

Pemex attributed the result to “a 30.4 billion-peso foreign exchange profit, as compared to a 120.9 billion-peso profit in 1Q2018…due to the appreciation of the Mexican peso against the U.S. dollar in the period,” as well as “a 8.2-billion cost due to financial derivatives, mainly as a result of the appreciation of the U.S. dollar against other currencies in which Pemex holds debt. This effect was partially offset by foreign exchange profit from debt.”

Pemex’s total debt, acknowledged to be the highest among the global oil majors, was estimated at $106.5 billion at the end of March, up 0.9% from the end of 2018, which it blamed on the exchange rate’s appreciation.

The quarter also included a two-notch downgrade by Fitch Ratings of Pemex debt. The ratings agency cited concerns about the direction of energy policy under the new administration, particularly regarding the viability of a planned $8 billion oil refinery in LÃ³pez Obrador’s home state of Tabasco.

The results follow Pemex’s announcement last week of the Mature Fields Investment Opportunity Program. CEO Octavio Romero Oropeza told a gathering of oil and gas operators, oilfield service providers, and members of the financial sector that Pemex “seeks to optimize [contracting] schemes that make the execution of exploration and extraction projects feasible by including the participation of private corporations.”

Pemex said it “aims to attract operating and service companies to provide integral services for the exploration and extraction of hydrocarbons in mature fields, the opportunity to sign risk contracts under the integrated exploration and extraction service contracts (CSIEE), and therefore, complement technical, financial and execution capabilities, in addition to sharing risks of Pemex’s assignments.”

Under the CSIEE scheme, Pemex would maintain ownership of the fields, which were assigned by CNH via the Round Zero process in 2014, and continue as operator. The maximum term for the contract would be 15-25 years, with payment to the contractor calculated through a fee in U.S. dollars/unit of hydrocarbon produced.