Mexico’s Petróleos Mexicanos (Pemex) reported a steep rise in the flaring and venting of its natural gas in its first quarter earnings call. 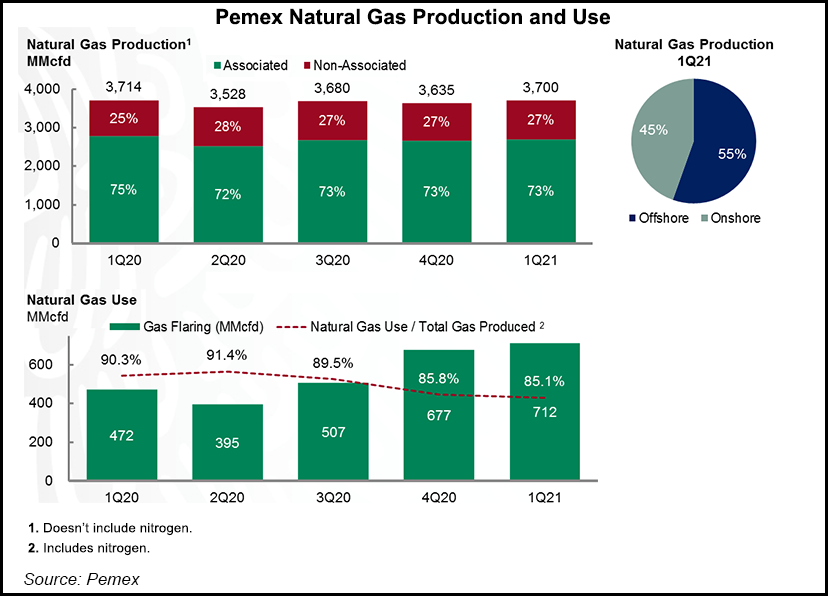 The higher rates of flaring are due to processing and other nitrogen elimination infrastructure deficiencies, executives told investors on Friday (April 30). As a result, only 85% of the natural gas Pemex produced made it to market in the first quarter.

Non-associated gas production at Pemex operations rose 83 MMcf/d in the quarterly comparison thanks to well completions at the gas-rich Ixachi field. Associated gas accounted for 73% of total production in the first quarter.

Ixachi is one of 20 “priority fields” that the Mexican government is backing to help increase oil and gas production. The new shallow water and onshore priority fields were producing 164,000 b/d at the end of March compared to 34,000 b/d in March of last year, led by production from the Mulach and Ixachi fields.

CFO Alberto Velazquez blamed lower production in 2020 on Mexico’s commitments to the Organization of the Petroleum Exporting Countries, or OPEC.

“We estimate that under better operating conditions we will gradually increase production in the upcoming years,” Velazquez said.

Executives said they were on track to “recover the pace we lost last year” with the focus on the most profitable areas of the business. Capital expenditures (capex) for 2021 as set out in the company’s recently announced business plan is 225 billion pesos, or $11.15 billion. Capex was 122,476 pesos ($6 billion) in 2020.

The company’s flagship infrastructure project, the Dos Bocas refinery in Tabasco state, is 27% complete, “basically on time” with the planned schedule, executives said. The refinery is scheduled to be complete in 2024 at a total cost of $8 billion.

Pemex paid 133 billion pesos ($6.59 billion) to the federal government in the quarter, making it “the main contributor in Mexico” to government coffers, executives said. However, Pemex is also increasingly receiving state help to cover its financial obligations.

The cost of crude extraction in the first quarter was $11.15/bbl, down 20% year/year, proving “our efficiency program is having results,” Velazquez said. Mexico’s crude oil basket price was $56.62 in the first quarter, up 42.6% on the same period last year.

Net loss was 37.4 billion pesos (minus $1.85 billion) in the first quarter, compared to a 562 billion-peso loss, which was $23 billion at the then-exchange rate, in 1Q2020. Executives attributed the result to foreign exchange losses related to Pemex’s debt payment obligations.

The “onerous fiscal burden” also impacted the bottom line, executives said. On the plus side, losses due to fuel theft were negligible in the quarter.