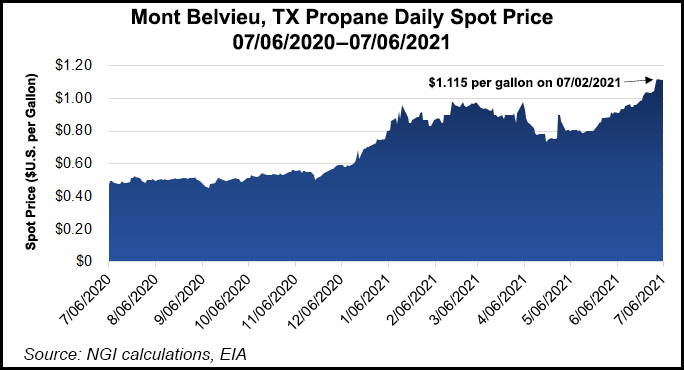 President Andrés Manuel López Obrador announced last week that Pemex would launch a subsidiary called “Gas Bienestar” or “Gas Wellbeing” within three months, and that authorities are working to establish a maximum LPG price for consumers.

This would be a major shift in policy, as Mexico liberalized LPG prices in 2017 under the framework of the 2013 constitutional energy reform.

López Obrador is seeking to put a lid on the cost of LPG for households, the leading demand segment for the fuel, amid rising global propane prices. LPG can refer to propane, butane or a mix of the two.

The residential segment accounts for 55.5% of LPG demand in Mexico, according to September 2020 data from energy ministry Sener. The commercial and vehicular transport segments account for about 15% each, followed by industrial demand at 10.8%.

“While we establish a maximum price mechanism, which we are going to establish, we are also preparing the creation of a company to distribute [LPG] at a fair price,” the president said during his daily press briefing on July 7.

He pledged that the price of LPG will not increase beyond inflation, and that the new firm’s profit margins will be minimal and used only to cover operating costs.

The president accused private sector distributors of selling LPG at “a very elevated cost,” citing that five companies control nearly half the retail market. He accused them of engaging in anticompetitive practices.

The watchdog noted that it has two ongoing investigations into the market. One seeks to determine whether competitive competitions exist in the LPG market in accordance with Mexico’s Hydrocarbons Law, and the other is examining possible collusion and price manipulation by distributors.

Cofece said that while Mexico’s Comisión Reguladora de Energía (CRE) has the power to set prices in the LPG market, legally it can only do so after Cofece has determined a lack of competitive conditions via an official investigation.

Business chamber Coparmex said the creation of a state-owned LPG retailer would not solve the underlying problem of Mexico’s growing reliance on LPG imports amid stagnant domestic oil and gas production.

Imports supplied 65% of Mexico’s LPG consumption as of September 2020, according to Sener.

Additionally, the measure “is anticompetitive and ineffective for slowing the increase in prices,” the chamber said.

Coparmex said that while it shares the government’s desire for citizens to obtain the best services at the best price, intervention by Pemex would limit participation and competition in the sector.

A state-owned firm selling LPG at below-market prices “violates the principle of equality that must prevail among participants in the energy sector,” Coparmex said.

The group added, “with the low production and high volume of importation, the proposal to offer gas at a lower price is not viable without a return to subsidies like in the past — where Pemex absorbed the variations of international prices — which would aggravate even more the finances of the [company] and result in an anticompetitive practice.”

Mexico should instead “promote domestic production, take advantage of the country’s gas resources and allow more companies to participate in increasing the supply,” Coparmex said, explaining that this would be a “natural” way to obtain lower prices.

In a column on Friday for NGI’s Mexico GPI, Gadex consultancy founder Eduardo Prud’homme noted that Pemex has historically only participated in the wholesale marketing of LPG.

“So Pemex will now enter a segment that it knows little about, that for decades has only been operated by a small group of private companies,” Prud’homme said.

He added, “In its concern to mitigate the rise in the price of LPG, the current government has not considered encouraging the use of natural gas, the price of which is consistently cheaper per unit of energy than LPG.

“Nor has it looked into ways in which the vast natural gas pipeline network could be better used to create new distribution zones, despite the president’s recurring complaint that there is overcapacity in pipelines.”