When Brazil’s energy industry was reformed more than a decade ago, state oil company Petroleo Brasileiro SA, aka Petrobras, raised $70 billion through an initial public offering (IPO) amid a buying frenzy in the Sao Paulo stock exchange. Mexico’s state-owned Petroleos Mexicano (Pemex) had no such luck in the country’s oil and gas reform, but the company has no plans to go it alone. 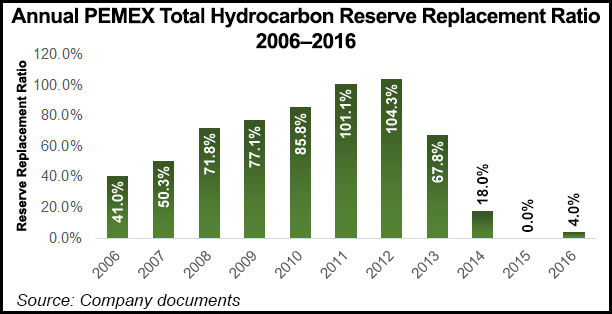 Because of strong political opposition to privatization, then-President Enrique Pena Nieto elected to essentially “split the baby,” assigning some assets to Pemex, allowing it to develop through farm-outs and other alliances, and then laying out plans to put the rest of the resource base up for bid from home and abroad.

What remains of the Pemex legacy from nearly eight decades of state monopoly are the generous allocations the company received of upstream operations and prospects in the 2013 energy reform’s “Round Zero,” before the first upstream auctions to outsiders began.

The National Hydrocarbons Commission assigned the state company about 20 billion boe, about 20% of the reserves, including such valuable potential assets as some in the deepwater of the Perdido Fold Belt, next to the maritime border with the U.S., and in the Burgos and Sabinas gas basins.

The Round Zero assets are not granted in perpetuity. Those that are allowed to lie fallow have to be returned to the state within a reasonable timespan. So, Pemex is under pressure to make productive use of the instruments provided by the reform, such as farm-outs and other forms of alliance that previously were forbidden under the state monopoly.

Farm-outs are key to the future of Pemex, said Gustavo Hernandez, director of resources, reserves and associations for the exploration and production arm.

“The challenge is to adapt our business strategy so we can replace production currently lost by mature fields,” Hernandez said this week at the fourth Mexico Oil & Gas Summit in Mexico City.

Thus far, Hernandez said Pemex has identified 155 blocks as targets for extraction farm-outs, including 97 onshore, including non-associated gas, in addition to 31 exploration targets for deepwater.

No longer does Pemex intend to go it alone in the upstream. Now, with the help of the international industry, “the aim is to get back to the 100% replacement of reserves that we used to achieve years ago,” he said.