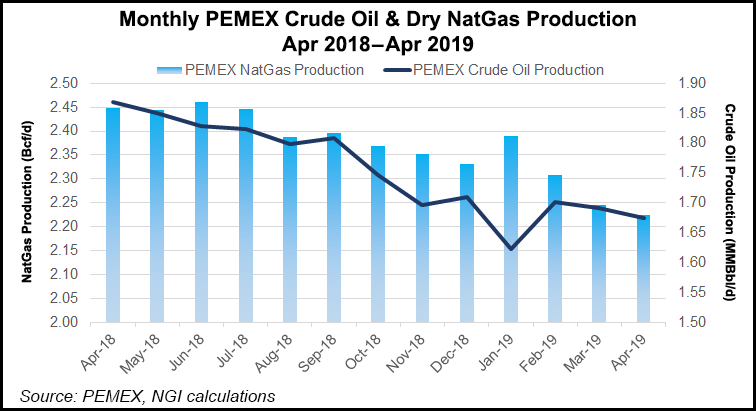 From January-April, dry gas production averaged 2.292 Bcf/d, down 6.76% from the same period a year ago, according to the latest monthly figures published by the state-owned firm.

Pemex wellhead natural gas production averaged 3.697 Bcf/d in April, off 3.6% from a year ago.

The April figures follow a first quarter in which Pemex attributed a 15% year/year decline in non-associated gas production to “reallocation of resources to crude oil producer assets in the northern region.”

President Andrés Manuel López Obrador has pledged to restore Pemex to its former glory by reducing its fiscal burden and increasing its budget, with Pemex crude production forecast to reach 2.4 million b/d by 2024.

Over the short-term, Pemex is accelerating the development of 20 fields, including the gas-rich onshore Ixachi field in Veracruz state, which Pemex expects to produce 900 MMcf/d by 2021.

However, analysts have warned that Ixachi’s production alone will not be enough to offset the natural decline of other fields such as Cantarell and Ku-Maloob-Zaap, meaning that Mexico will continue to rely heavily on gas imports from the United States for the foreseeable future.

In a May presentation, independent energy analyst Rosanety Barrios said even under the most optimistic production scenarios, Mexico gas demand will exceed its production for at least the next 15 years.

The country’s gas imports totaled 5.434 Bcf/d in February, the latest month for which official data is available, and imports accounted for 67% of Mexico’s total gas supply. These figures compare with 5.189 Bcf/d, or 65% of total supply, in February 2018.

In a recent presentation, Comisión Nacional de Hidrocarburos (CNH) commissioner Alma América Porres said Mexico could theoretically reach gas production of 7 Bcf/d, or 78% of national demand, by 2029, up from 3.7 Bcf/d in 2018.

However, this would require average annual investment of $14.5 billion by Pemex and $5.9 billion by the private sector.

This year’s capex is a far cry from the $18.9 billion allocated in 2014, the last year for which Pemex saw a year/year increase in its upstream budget. What’s more, López Obrador’s production goals will be “impossible” to achieve if he does not resume the exploration and production (E&P) bid rounds made possible by Mexico’s 2013 constitutional energy reform, according to a February note by Talanza Energy Consulting CEO Marco Cota.

Rather than offering operating stakes to international firms in upstream blocks through bid rounds, López Obrador has sought to develop mature fields via tenders for integrated exploration and extraction oilfield services contracts, known by their Spanish initials CSIEE.

“The current administration has announced a ”new’ plan to revert declining production with service contracts called CSIEEs, disregarding the fact that this was exactly how the industry operated from 2008 to 2013 without any significant results,” Cota said.

“From the E&P Mexican learning curve of the last 10 years, we can expect that CSIEEs will be insufficient to revert the declining production and the new government will have no other alternative than taking advantage of the mechanism of farmouts and bidding rounds, given that 20% of government revenues still depends on oil rent.”

Uncertainty over the extent winter chills into the month of February put downward pressure on natural gas futures in early trading Tuesday. The February Nymex contract was off 5.6 cents to $3.971/MMBtu at around 8:50 a.m. ET. March was off 3.8 cents to $3.837. The European weather model shed heating demand from the outlook overnight…