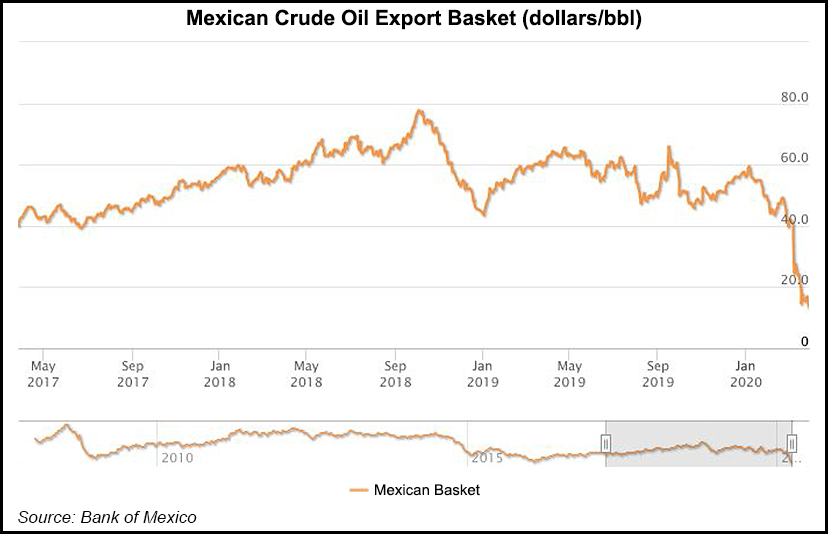 The latest declines pale in comparison, however, to what’s in store for the March figures as impacts of the coronavirus reverberate through the global economy.

Since closing February at $39.76/bbl, the Mexican basket price, for which the Maya heavy sour grade is the primary component, had fallen to $10.37/bbl as of Tuesday.

Maya has been battered by the coronavirus pandemic, a price war between Saudi Arabia and Russia, and the International Maritime Organization’s (IMO) restrictions on sulfur content in shipping fuel, which took effect Jan. 1.

In a recent update, Swiss commodities trading house Vitol reported an 11% decline in traded volumes of high-sulfur fuel oil in 2019 ahead of the new IMO rules, a trend that does not bode well for sour crude exporters such as Pemex.

Natural gas markets were still mulling the potential supply and demand impacts of the coronavirus in North America and globally as of Tuesday.

Mexico, a vital outlet for U.S. natural gas exports, has lagged behind other large economies in imposing strict measures to slow the contagion.

However, the government on Monday declared a national health emergency, urging the country’s roughly 129 million habitants to stay home unless absolutely necessary.

Pipeline exports to Mexico had been averaging about 5.7 Bcf/d in March, up 0.7 Bcf/d from March 2019, RBN Energy analyst Sheetal Nasta said in a note published Monday.

In a conference call Tuesday with the finance ministers and central bank governors of the Group of 20, aka G20, nations, which include Mexico and the United States, the International Monetary Fund’s (IMF) Kristalina Georgieva, managing director, said “we remain very concerned about the negative outlook for global growth in 2020 and in particular about the strain a downturn would have on emerging markets and low-income countries.”

In the January update of the World Economic Outlook, published before the first confirmed Covid-19 case in the United States, IMF projected growth of 1% in 2020 for Mexico’s economy, which contracted by 0.1% in 2019. However, Mexico and the world are now bracing for recession in the wake of the pandemic.

After a webcast presentation last Friday, a team of economists at Moody’s Analytics said “despite its limited ties with China, Mexico’s economy is more vulnerable” to recession “because of its dependence on the U.S. and the unpreparedness of the public health system.” It said “the peso has depreciated significantly, and the stock market has plunged. The lack of government actions to prevent an acceleration in the spread of infection and the anemic economic situation support strong volatility in financial markets.”

In a commentary published Monday by the Woodrow Wilson Center think tank, Lourdes Melgar, a former deputy hydrocarbons minister at Mexico’s energy ministry Sener, warned that the Mexican basket price could drop below $10/bbl, dealing “a major blow to the federal budget and to Pemex, despite hedge protections.”

Melgar, now a non-resident fellow at Rice University’s Baker Institute for Public Policy, said the government should resume Pemex farmout auctions to ease the strain on public finances, and “take advantage of historically low natural gas prices, and boost imports to power generation and industrial plants…The government needs to be aware of the golden opportunity of turning to natural gas at least through 2022.”

The assessment follows a downgrade last week of Pemex’s foreign and local currency ratings by S&P Global Ratings to “BBB” and “BBB+” from “BBB+” and “A,” respectively, in response to the coronavirus.

*The original story incorrectly stated Pemex’s export volumes by destination for February 2020. The volumes have been corrected. NGI regrets the error.