Adding further friction to the frayed relationship between the government in Mexico and the private sector, the chief of Mexico’s Petróleos Mexicanos (Pemex), Octavio Romero Oropeza, said on Wednesday he believed the state oil company held the majority of the resources in the massive offshore Zama field. 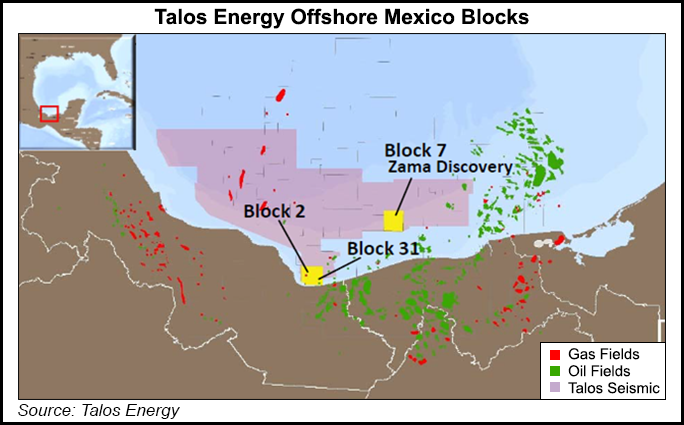 “It’s a shared basin,” he said, referring to the Zama shallow water reservoir that straddles one block operated by Talos Energy Inc. and another operated by Pemex. “In the Talos interpretation, they have the biggest part of the field. At Pemex, we feel we have the biggest share. But independent of this, Pemex is going to drill exploratory wells to determine this…

“Both Pemex and Talos want to be operator of this basin,” he said, “because it’s an important well. So we need to reach an agreement of who is operator.”

Oropeza said Pemex was in discussions with the Energy Ministry and with Talos and the issue would be determined through “technical means.” Zama is considered to be the largest find in Mexico by a private sector company and the dispute is being seen as part of the larger narrative of Mexico wanting to give greater power to state firms.

Talos CEO Tim Duncan reportedly told Reuters that it was concerning to the Houston-based company “that the development of our world-class discovery, which also entails up to $28 billion in fiscal revenue for the Mexican government and a significant boost in production for Pemex, could end up being delayed by other non-Zama exploratory plans from Pemex. It’s clear that our plan also offers the fastest, most realistic path to first oil.”

Talos holds a 35% operating interest in the consortium that operates offshore Block 7, which was awarded through the Round 1.1 bidding process conducted in 2015 by upstream regulator Comisión Nacional de Hidrocarburos (CNH). The remaining stakes are held by Sierra Oil & Gas, a Wintershall DEA Co. (40%), and Premier Oil plc (25%), which is seeking to sell its stake in Zama.

“NSAI estimates 60% of the total resources of Zama are located on Block 7 in the 2C case,” Talos said. “As previously disclosed, the Zama reservoir extends into the adjacent block to the east, owned by Pemex and, therefore, is subject to unitization between the consortium and Pemex.”

The news of additional strain between the public and private sectors comes at an inconvenient time for Mexico’s economy, which is undergoing a sharp downturn. Gross domestic product shrunk 0.1% in 2019, according to preliminary data released Thursday. President Andrés Manuel López Obrador had promised annual growth of 4% during his 2018-2024 six-year term.

Still, López Obrador, speaking in the same press conference, was adamant the government would not return to private sector auctions in the upstream segment, calling the energy reform of the previous administration a fraud.

“We are respecting the contracts that were given out during the so-called energy reform,” Lopez Obrador said. “The old government fooled us, not the companies, when they said that the energy reform would lead to foreign investment and lots of oil. They said we would be at 3 million bbl/d of oil by now. It was a big trick.

“We can’t think of new rounds, contracts, if we don’t have results. This is clear.”

“The president reiterated however that private sector participation in Mexico’s oil industry would continue to take place in the upstream services area, where “there is good work being done by the private sector services companies.”