An $8 billion debt refinancing package announced this week by Mexico’s national oil company Petróleos Mexicanos (Pemex) is “a strong step in the right direction” for the heavily indebted firm, but further relief is needed, according to one expert. 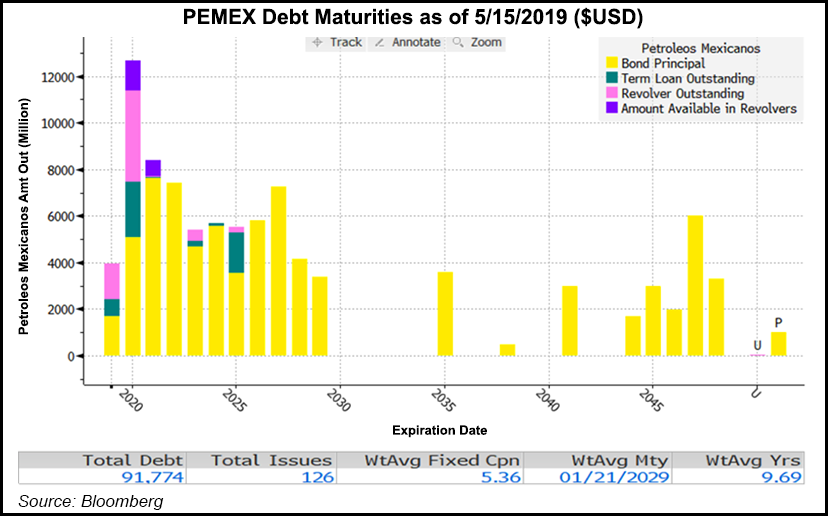 Pemex secured a letter of commitment from HSBC Holdings plc, JP Morgan Chase & Co. and Mizuho Bank Ltd. to refinance up to $2.5 billion of debt due this year, and to renew two revolving lines of credit for up to $5.5 billion, CEO Octavio Romero Oropeza said Monday during President Andrés Manuel López Obrador’s morning press conference.

He also highlighted that Pemex managed to negotiate an interest rate of Libor plus 235 basis points for the loan package. Libor, which stands for the London Interbank Offered Rate, serves as a globally accepted benchmark interest rate that indicates borrowing costs between banks.

Romero and López Obrador both stressed that Pemex, whose total debt stood at $106.5 billion at the end of the first quarter, will not take on new debt this year.

The decree entails converting 400,000 b/d of Pemex oil production from the asignación, or allocation tax regime, to the exploration and extraction contract model, which is more favorable for producers.

The allocations refer to acreage awarded to Pemex by national hydrocarbons commission CNH via the Round Zero process in 2014, while the exploration and extraction contracts are what CNH awarded to the winners of bid rounds held between 2015 and 2018.

Under a previous fiscal relief measure announced this year, only 150,000 b/d of Pemex production would have been migrated to the exploration and extraction model, translating to tax relief of about $600 million, as opposed to 400,000 b/d and $1.58 billion under the measure announced Monday.

Noting that “markets were not really that impressed” with the relief measures announced Monday, Labardini said “these steps, according to what the secretary of finance has mentioned, are only a fraction of what they are planning to do in the future, so there are more things to come.”

Urzua said “despite all of the inefficiencies that there have been in the last years or decades, despite the corruption,” Pemex “is a company that before taxes…has a quite reasonable cash flow by international standards.”

He said the government has become overly dependent on extracting hydrocarbon revenue from Pemex, and that “bit by bit,” authorities will continue taking measures to reduce the company’s tax burden.

Plenty of concerns remain surrounding Pemex’s business plan, which include constructing a controversial $8 billion oil refinery. These concerns led Fitch Ratings to downgrade Pemex bonds by two notches in January, to only above junk status.

However, said Labardini, “I would think that the measures taken Monday are going to increase the perception of [the] level of commitment of the government with Pemex.”