Natural gas-heavy WPX Energy Inc. is selling its Piceance Basin properties in Colorado to a recently formed independent for $910 million, solidifying its decision to focus less on gas and more on its oily portfolio in the onshore. 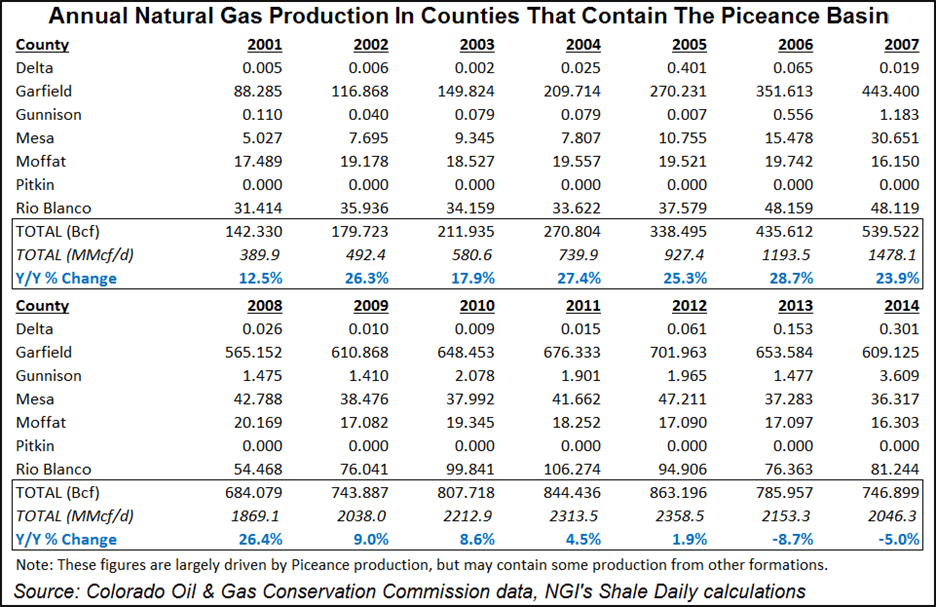 The Tulsa-based independent agreed to sell WPX Energy Rocky Mountain LLC to Terra Energy Partners LLC, formed last year, in a deal set to close by the end of June.

WPX now operates 4,000 wells across 212,000 net acres in Colorado’s Garfield and Rio Blanco counties that recently were producing 500 MMcfe/d net. The assets contain an estimated 2 Tcfe of proved developed producing reserves and an inventory of low-risk drilling locations, as well as deep rights across 150,000 net acres prospective for the horizontal Mancos Shale and Niobrara formation.

“The Piceance Basin is an area that we know well and one that we believe offers considerable upside potential through focused management,” Terra CEO Michael S. Land said. Land formerly was president of Occidental Petroleum Corp.’s Permian and Midcontinent business units.

Terra is assuming $100 million in transportation obligations in exchange for more than $90 million of WPX’s natural gas hedge value, while WPX would retain more than $110 million in additional hedge gains that are to be realized throughout the year.

The Piceance assets, on the market for months, continue a streak of sales by WPX over the last year (see Shale Daily, Jan. 8). Over the past 21 months the producer has executed close to $5.5 billion in transactions to reshape the company, high-grade the portfolio and protect its financial position.

“Our bias for action and being opportunistic won’t change,” CEO Rick Muncrief said. “We will pursue our very best investment options and continually evaluate how to optimize our assets. We’ve created a balanced portfolio with an excellent runway for sustained value generation.”

The Piceance assets include about 200,000 net acres with close to 11,000 gross drilling locations. The sale would solidify WPX’s turn to oil-producing assets. Close to 80% of 2015 output was gas-weighted, but oil should comprise about half of future pro forma production volumes, management said. This year’s cash operating costs aren’t expected to change once the sale is completed.

WPX “has a variety of options for the Piceance proceeds, including leverage reduction, additional drilling, infrastructure investments such as expanding its Permian gathering system, and buying out of any retained transportation obligations, including obligations associated with Piceance operations,” said management.

More details on the 2016 guidance and capital plan are to be released during the quarterly results conference call on Feb. 25.

The “well priced deal” in this commodity price environment solidifies WPX’s transformation, Tudor, Pickering, Holt & Co. said in a note Tuesday. Leverage had been a concern since it bought the Permian assets, but the deal allows WPX to exceed its previous 2016 divestiture target of $400-500 million, reduce net debt and improve administrative costs, analysts said. A portion of the proceeds is expected to be directed toward buying back debt, specifically $400 million of bonds due in 2017.

The sale also may be a “reassuring sign” to publicly held exploration and production (E&P) companies attempting to sell assets, analysts said. “We think investors aren’t as sensitive to valuations at this point of the cycle and would rather just see E&Ps close deals,” and having a “line of sight to deleveraging is more important for many E&Ps.”