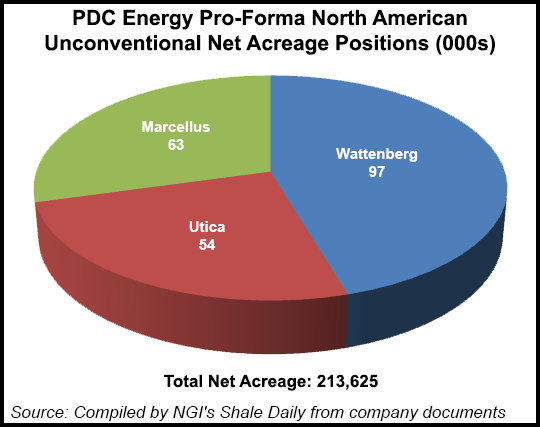 Denver-based PDC has made a concerted effort to cut some of the fat from its portfolio, ditching noncore assets in Colorado (see Shale Daily, Feb. 11, 2013) and suspending its West Virginia Marcellus drilling program last year (see Shale Daily, Dec. 12, 2013) to focus more on liquids production in Colorado’s Wattenberg field and Ohio’s Utica Shale. But while it managed to produce 20,400 boe/d in 2013 for a 35% year/year increase, most of that came from its 97,000 net acres in the Wattenberg (see Shale Daily, June 20, 2013).

This year, PDC aims to boost its liquids production to 60% from the 53% of production it generated in 2013. The company was issued its first three horizontal drilling permits in Ohio in 2012 (see Shale Daily, Sept. 20, 2012), according to state records, but most of its work in the play came last year, when it wasted no time in utilizing the other 17 permits it has been issued.

In notes to clients on Monday, following an awful day of trading on Thursday in which PDC shares fell by $2.98 on the Nasdaq after its presentation, analysts said the two Utica type curves issued by the company were “conservative” at best, and they continued to be less than enthusiastic about this year’s 9.5-10 million boe guidance, which was issued in December.

“While PDC made a strong case that its southern Utica position can represent a second core asset, we think investors will remain cautious on this acreage until further production data is available,” said BMO Capital Markets analyst Phillip Jungwirth. “Also, with Wattenberg production expected to remain flat for most of this year and valuation not cheap, we think shares will remain range-bound until PDC is closer to realizing the significant growth forecasted by its three-year outlook.”

Others, though, issued a buy rating, viewing an opportunity in Thursday’s sell-off and citing the future potential of PDC’s leaner, more focused portfolio.

“The company has great visibility for growth and could hit the 50,000 boe/d mark in 2016,” wrote Wunderlich Securities analyst Irene Haas. “We like [PDC’s] pared-down portfolio.”

Much of the excitement that has surrounded PDC’s Utica efforts stems from its might in the Wattenberg, where it is the third-largest producer and leaseholder in a core area that it estimates to hold 50-80% liquids. Moreover, PDC has demonstrated a willingness to push the core boundaries of the still-evolving Utica Shale.

In November, PDC secured Morgan County, OH’s first three horizontal drilling permits. Not since Devon Energy Corp. drilled and abandoned wells in Wayne and Ashland counties in 2012 (see Shale Daily, Dec. 6, 2013) has a company struck out that far west of the Utica’s early sweet spot in the southeast. PDC’s acreage in Morgan County, though, is nearer to that area than Wayne and Ashland counties in the north-central part of Ohio.

Of PDC’s 20 Ohio permits, 19 are drilled, producing or nearing completion. Analysts at Wells Fargo Securities said that with more production data on hand, the company rightfully has the confidence to push into Morgan County, where management expects wells to behave in a way similar to those in Guernsey County, where operators have seen favorable results (see Shale Daily, Nov. 19, 2013).

Management also said the company’s Garvin wells in Washington County, which neighbors Morgan County to the southeast, are gassier than expected. Haas, of Wunderlich Securities said “this pushed the condensate and wet gas windows further west” for PDC.

The company issued two type curves for a typical 5,000 foot lateral well. In the wet gas window PDC’s estimated ultimate recovery (EUR) is 1.2 million boe and in the condensate window it’s 680 million boe. Topeka Capital Markets analyst Gabriele Sorbara was more optimistic about PDC’s Garvin 1 well, saying that early results show it tracking the wet gas curve. He added that the Garvin 3 could do better with an open choke creating the possibility for production of 5,000 boe/d.

Like others in the Utica, PDC continues to evaluate different completion techniques, tinkering with downspacing, longer laterals and more hydraulic fracturing (frack) stages. Coupled with a choke management system, the company believes its EURs in the play will ultimately increase, according to analysts who attended the presentation.