PDC Energy Inc. increased its capital expenditure budget (capex) for 2014 to $647 million as it prepares to target core acreage in Colorado’s Wattenberg field and Ohio’s Utica Shale in an effort to boost its liquids mix to 60%. 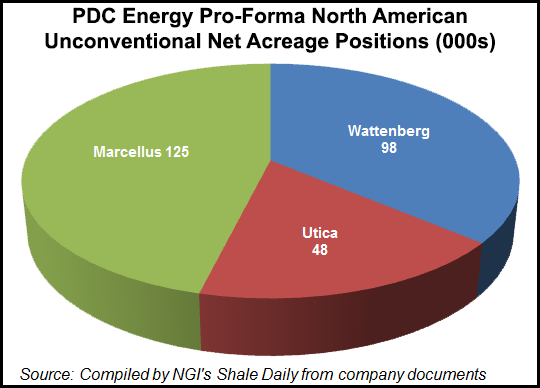 The company issued production guidance at between 9.5-10 million boe, coming in under energy analyst expectations that widely anticipated output of more than 10 million boe in 2014. PDC’s production next year excludes some dry gas that is to be cut out of the equation. The company also said it is selling its Upper Devonian gas and suspending its 2014 drilling program in the Marcellus Shale, citing the price environment for natural gas, a move it made in early 2012 as well (see Shale Daily, March 5, 2012).

“We revised our projections, and the impact on 2014 cash flow is minimal as the higher liquid mix [offsets] the loss of low value gas,” wrote Wunderlich Securities analyst Irene Haas in a research note.

PDC’s Marcellus program is a 50-50 joint venture it entered in 2009 with investment firm Lime Rock Partners. The venture has 125,250 net acres in the Marcellus, with most in northern West Virginia. PDC said it would budget $16 million for its 50% share to finalize drilling and completion operations on the remaining four horizontal wells and to help pay for infrastructure projects.

The company plans on dedicating $576 million toward development and another $71 million to acquisitions, exploration and other expenditures. The biggest chunk of PDC’s 2014 capex would be invested in the Wattenberg, where it plans to spend $469 million to deploy five rigs and spud 115 wells, including 59 in the Codell and 56 in the Niobrara formations. The company also plans to start its vertical well refracturing program and invest $100 million in a 26-well downspacing test in the Niobrara.

“We are excited about participating in the 26-well per section test in Wattenberg that could add significantly to our liquid-rich…inventory,” said CEO James Trimble.

PDC recently brought eight more wells in the Wattenberg online that were part of a 16-well section. Six wells the Codell are tracking above the company’s type curve and producing at an average 24-hour rate of 500 boe/d. The entire 16-well section is producing at a peak, one-day production rate of about 7,600 boe/d.

In the Utica Shale, PDC plans to invest $162 million to spud 18 horizontal wells, including eight in the company’s northern acreage and 10 wells in its southern acreage. The company said it would add a second drilling rig to the play in the second half of 2014. PDC also plans to spend $30 million to acquire additional acreage.

“Our 60% liquids mix forecast for total company production in 2014 further demonstrates our transition from a natural gas focused company to a liquids focused one,” said Trimble.

PDC expects gross production from its 11 Utica wells to be 5,200 boe/d by the end of this year and, assuming full ethane recovery, it projects the mix will be 70% liquids. As its Neill 1H well in Washington County, OH is still recovering fracture water, the company said it is reacting differently to prior Utica wells, which concerned some analysts.

“While the impact of the capex increase and production dial down is minimal, the Neill well is testing at lighter rates than we had expected, likely due to partially missing the Point Pleasant within the 6,000 foot lateral — we will have to wait and see,” Haas wrote.