PDC Energy wells in the Codell formation of Colorado’s Wattenberg Field are outperforming those in the Niobrara, and the independent plans to drill as many Codell horizontal wells as Niobrara horizontals this year, company officials said during an analyst day conference in New York Thursday. 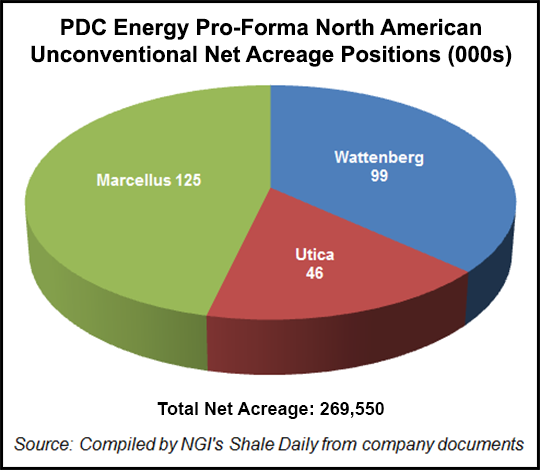 PDC is operating at depths of 6,200-8,000 feet and drilling 4,000-foot laterals in both the Codell and Niobrara, said Scott Reasoner, vice president of western operations for the Denver-based company. PDC has completed 40 Niobrara wells and eight Codell wells, which have all “continued to shine,” but the Codell is “a little easier to frack [hydraulically fracture] and it’s also a little higher permeability, and that’s the reason why it performs better than the Niobrara at this point,” Reasoner said.

The company projects 7.3 million boe of production this year, weighted 46% natural gas and 54% liquids, most of it (5.5 million boe) from its Wattenberg operations. Another 1.4 million boe will come from the Marcellus Shale and almost 400,000 boe is expected from the Utica Shale in Ohio.

But it was the Codell that was the “belle of the ball” Thursday, Wells Fargo analysts said. PDC’s Codell data was positive and the company’s production guidance “far surpass[ed] expectations, but the mix is gassier than expected, taking off some of the luster,” Wells Fargo said.

PDC sees opportunities for up to 2,000 horizontal projects in the Wattenberg, 600 in the Marcellus and another 200 in the Utica. Prior to 2010, the company had horizontal drilling experience but was focused on vertical drilling, said Barton Brookman, senior vice president of exploration and production.

“We’ve considered ourselves to be outstanding at vertical drilling [and] tight rock completions, with an emphasis on multistage hydraulic fracturing,” Brookman said. “We quickly moved the company to a more capital-efficient horizontal drilling focus while we capitalized on our completion expertise. And in 2013, we expect 95 horizontal wells to be drilled, with just over 1,200 frack stages that will be executed by our completion teams.” The company expects to spud 69 new drills and conduct 48 refracks this year.

PDC last year paid $330.6 million to acquire close to 35,000 net acres in a liquids-rich area of the Niobrara and Codell formations (see Shale Daily, May 15, 2012). The assets were almost entirely in the core area of the Wattenberg Field, straddling Colorado’s Adams and Weld counties.

The development of horizontal drilling in the Niobrara has “been a real challenge” for midstream providers to put facilities in place to gather gas and process natural gas liquids, according to George Courcier, vice president of marketing and midstream. “To that end, our primary midstream service provider, DCP [Midstream], has embarked on a very aggressive capital program that will see them install new facilities through the year 2015 that will more than double their capacity in the basin,” he said (see Shale Daily, Aug. 8, 2012). DCP’s LaSalle Plant, which was planned with a capacity of 110 MMcf/d, is scheduled to open in Weld County by this fall.

Last month PDC increased its capital expenditures for 2013 from $365 million to $443 million and said it planned to allocate 85% of it toward liquids-rich projects in the Utica and in the Wattenberg Field, part of the Denver-Julesberg Basin in Weld County, CO (see Shale Daily, March 20). The company plans to maintain a one-rig drilling program in the Utica throughout 2013 but will deploy a third rig in the Wattenberg in May. PDC said it plans to drill 11 horizontal wells in the Utica and 69 in the liquids-rich Niobrara and Codell formations this year.