Denver-based PDC Energy Inc. earlier this month closed on its $1.3 billion acquisition of crosstown independent Great Western Petroleum LLC and is forecasting production growth of as much as 23% by the end of June 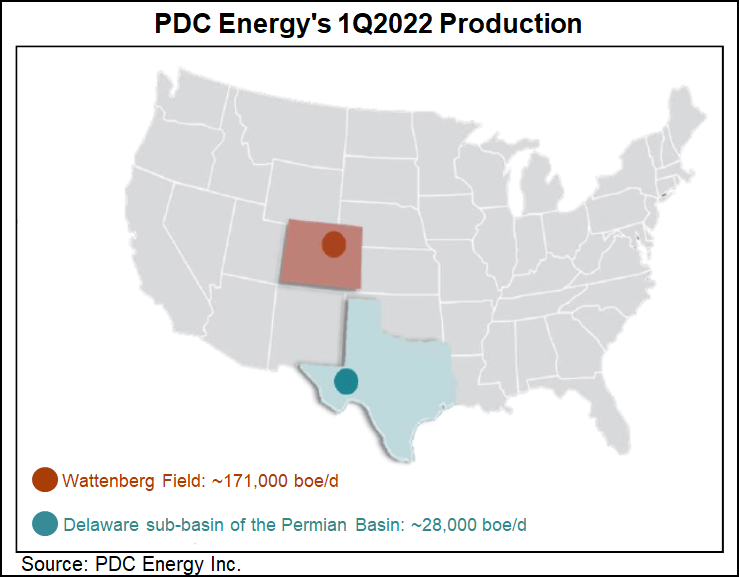 “We’re ready to start this integration,” CEO Bart Brookman told analysts during the earnings call for the first quarter.

PDC in February announced the Great Western deal, noting at the time the acquisition would add 55,000 boe/d of production in the Wattenberg field of the Denver-Julesburg (DJ) Basin.

With the acquisition, production during the second quarter should average 235,000-245,000 boe/d, according to management. The quarterly guidance amounts to an 18-23% increase in output from 1Q2022, when production averaged 199,000 boe/d.

The company spudded 20 wells and placed 40 wells to sales in the Wattenberg during the first quarter. Moreover, its drilled but uncompleted (DUC) well inventory in the field totaled 123 at the end of March.

PDC ended the quarter with about 180 approved Wattenberg permits and is making headway on more than 500 more with the Colorado Oil and Gas Conservation Commission. About 100 permits, in the Kenosha and Broe oil and gas development plans could win regulator approval next month, management said. Colorado implemented broad oil and gas industry regulatory changes in 2021.

In the Delaware, PDC drilled six wells and brought nine online during 1Q2022. The Delaware DUC count ended the quarter at 18.

Capital spending totaled $220 million in the first quarter, with $144 million going to DJ operations and $76 million to the Delaware.