Patterson-UTI Energy Inc. did something in the final three months of 2012 that no other onshore oilfield services provider has announced yet: hydraulic fracturing (fracking) services climbed and sales surpassed expectations — surprising even company executives. 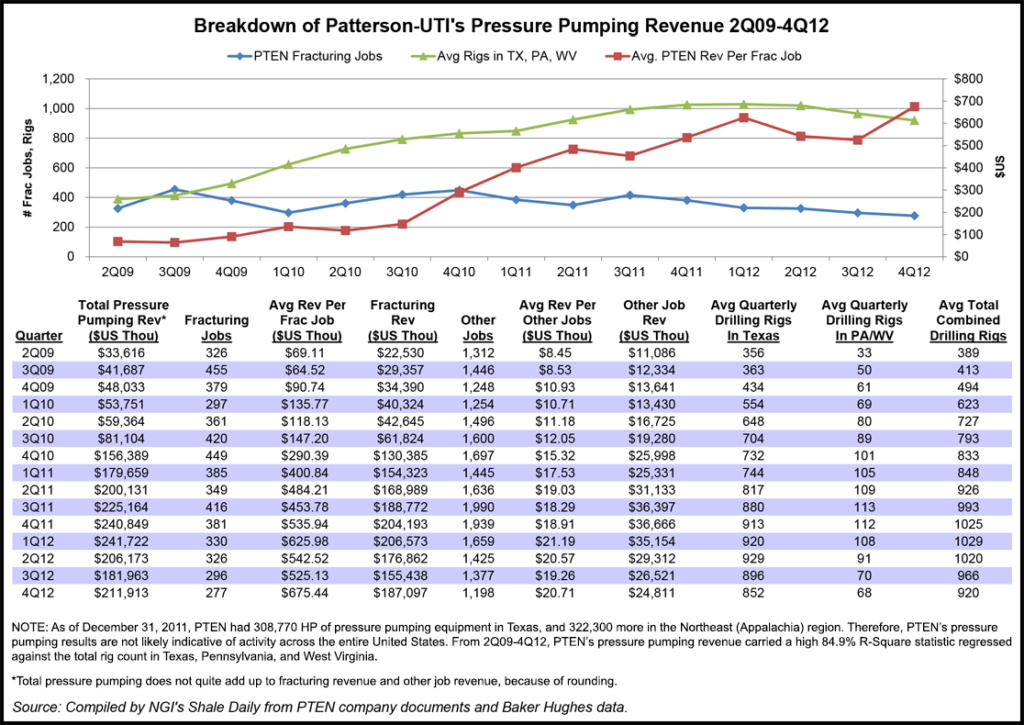 The announcement on Thursday led shares to climb the most in three years, jumping 10% at the close, which was the biggest gain for the Houston company since April 21, 2009. Patterson provides drilling rigs and pressure pumping, i.e., fracking, equipment.

Pressure pumping revenue in 4Q2012 jumped 16% sequentially to $212 million, which was well above Wall Street’s average expectation of $177 million.

“Compared with prior periods of weakness in drilling rig demand, the contrast this time is stark,” said Chairman Mark Siegel. He shared a microphone with CEO Andy Hendricks during a conference call on Thursday. “Our share of the market basically stayed strong despite all of the changes in 2012.”

The results were a surprise not only to analysts but also to top executives.

“These results for the fourth quarter are better than many people expected, we included,” Siegel said. “Let me point out that there were no extraordinary or unique gains during the quarter. Both of our core operating businesses performed better than expected, especially pressure pumping, where we saw greater-than-expected activity levels.

“I believe our strong performance during the quarter in pressure pumping, which included awards of incremental work from existing customers, arose from our company’s core focus on customer satisfaction and the relationship we have with our customers. To meet this increased activity level, we began commissioning our idle pressure pumping equipment.”

In the final three months of the year “we saw a higher level of activity as customers performed well completions that had been delayed from previous quarters. And additionally, we experienced a much lower level of seasonality related to holidays than we had in recent years. The increased level of activity combined favorably with our work schedules to reduce the amount of downtime between the jobs.

This year activity levels are expected to show “modest improvement,” said the CEO. “While I’m not sure that we can say that demand has improved across the industry, demand has improved for our services. The higher activity levels we experienced in the fourth quarter required us to begin commissioning the new equipment that we had taken delivery of earlier in 2012. Initially, we did not activate this equipment as we waited for demand to improve.

“And let me be clear, we did not stack any working horsepower in 2012. This was new equipment and not a reactivation. And additionally, to meet our higher activity levels, as well as for our preventive maintenance program requirements at the high levels of utilization for both 24-hour operations and the multi-well pads, we purchased an additional 13,500 hp at an opportune time in the market.”

Most of the activated equipment primarily went to meet incremental work for existing customers. “It’s an important distinction to note that we were not aggressively bidding this equipment, which would’ve negatively impacted the market,” said Hendricks. “But we did respond as opportunity arose to activate this horsepower, all at reasonably profitable pricing levels.”

Patterson ended 2012 with about 750,000 hp in its fleet, and it is continuing to activate horsepower, with the remainder of its idle equipment expected to be ramped up by the end of March.

Market pricing is “close to a bottom,” he said. “Our overall pricing is expected to be slightly lower on average than the fourth quarter. Additionally, we expect to incur some personnel training costs associated with the activation of our equipment. Finally, we do not expect to be able to achieve the same level of customer efficiency in the first quarter, as work on multi-well pads in our schedule is expected to be a little more spotty, and weather in the northeast may negatively impact our ability to efficiently move people and equipment to and from the job sites.”

Pressure pumping capital spending is slated to be about 20% of Patterson’s budget this year, most of which is related to maintenance spending as well as funds “for natural gas conversions and facilities. No additional fracking horsepower is budgeted for 2013.”

Contract drilling, which continues to be Patterson’s largest business, saw its revenues fall 5% sequentially in 4Q2012 to $425 million as U.S. activity levels slowed, said Hendricks. “During the fourth quarter, we averaged 198 rigs, down from 211 in the third quarter, but this was better than expected.” In Canada Patterson averaged seven rigs, up from five in 3Q2012.

“Average direct operating costs per day were similarly impacted by an increased contribution from Canada, and as a result, increased by $110/day to $13,450. Accordingly, our average margin per day was better than expected, with a decrease of only $90 during the fourth quarter to $9,020.”

“Our own rig count dipped in January, averaging 197 rigs, including 187 rigs in the U.S. and 10 rigs in Canada,” said Hendricks. “This dip was primarily related to several rigs that were on standby rolling off contract. We currently have four rigs on standby.”

In 1Q2013 Patterson expects to average 200 rigs, including 190 rigs in the United States and 10 rigs in Canada. Average revenue per day is forecast to rise by $600 in 1Q2013 because fewer rigs would be earning lower standby rates, as well as higher day rates for its proprietary Apex rigs and more rigs added in Canada. “The fewer rigs on standby and more rigs in Canada are expected to result in an increase of $500 in direct operating cost per day,” said the CEO. “As a result of the increase in average revenue per day, average margin per day is expected to increase $100.”

Unlike other large pressure pumping companies, such as Halliburton and Schlumberger, Patterson does not have an extensive national footprint in the United States. As of year -end 2011, Patterson had roughly 50% of its pressure pumping equipment in Texas, with the other 50% in the Appalachia region, so its operating results are not a bellwether sign of what is happening in the United States as a whole. According to NGI’s Shale Daily calculations, Patterson’s pressure pumping revenue has exhibited a strong 85% R-Square statistic when regressed against the combined oil and gas rig count in Texas, Pennsylvania and West Virginia since the second calendar quarter of 2009.

Patterson’s 4Q12 quarterly pressure pumping revenue managed to climb 16% sequentially, despite the fact the company completed 19 fewer fracturing jobs in the fourth quarter from the prior three months. The reason? The average revenue it received per job soared to $675,000 in the fourth quarter, up 29% sequentially. In fact, the average revenue Patterson has received for its frack jobs has increased steadily over the last three years, which reflects the general trend toward longer lateral lengths and more frack stages per well.