Houston-based Patterson UTI Energy Inc. is idling fracturing spreads in the Lower 48 and evaluating the economics of working versus shutting down more equipment through the end of the year as customers drop rigs. 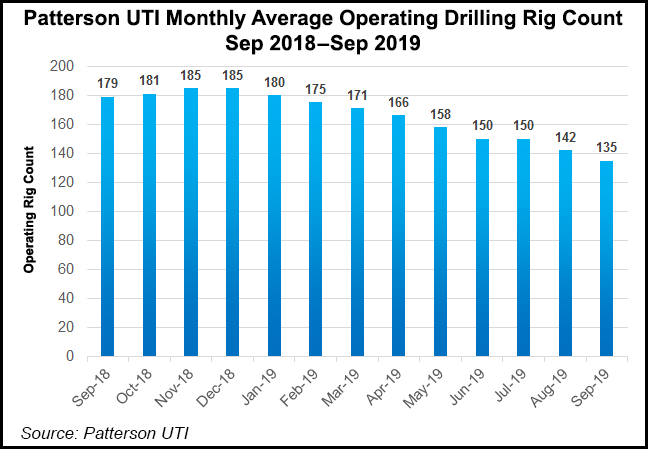 Patterson-UTI ended the third quarter with 14 active spreads, and it idled another spread early in the fourth quarter, CEO Andy Hendricks said Thursday during a conference call to discuss results.

“It’s been a challenging year, with the overall decrease in U.S. industry rig count, and the third quarter was the quarter with the fastest decline during the year,” Hendricks said. “Both drilling and pressure pumping activity are expected to decline further in the fourth quarter, but recent customer conversations suggest that our drilling rig activity will bottom in the fourth quarter and then a modest increase in late December and early January.”

For now, Industry pricing for spot work is at an “unsustainably low level” with reduced activity and “increased white space in the calendar for active spreads…We have been continuing to reduce operating locations in order to scale the business for current market conditions.”

A big issue is the pressure pumping market, which Hendricks said has been oversupplied since the end of 2017. “Improvements and completion efficiency have exacerbated the problem, with all the additional horsepower added to the market over the past two years.”

The company made a decision to permanently retire 300,000 hp, but it still has a fleet of 1.3 million hp, “more than capable of undertaking today’s most challenging completion jobs in an efficient manner,” Hendricks said.

Management’s warning earlier this year has come to pass, as “operators slowed spending levels during the third quarter, which negatively impacted activity levels for both drilling and pressure pumping. However, our rig count in the third quarter of 142 rigs was in line with our expectation,” said the CEO.

In the contract drilling unit, operating days in the United States fell in the quarter from a year earlier to 13,054 from 16,312. Canada operating days slumped to 27 from 82.

In a glimmer of optimism, Hendricks said the company expects its rig count “will stabilize near current levels and average 126 rigs for the fourth quarter, with some increase in the first quarter as operator budgets reset in 2020,” Hendricks said.

The company notched a one-time impairment charge of $173 million in the contract drilling segment by retiring 36 legacy rigs and other drilling assets. None of the top-of-the-line super-spec Apex rigs were retired.

“Given current market conditions, combined with strong customer demand for super-spec drilling rigs, we believe the 36 rigs that were retired had limited commercial opportunity,” Hendricks said. “Our current total rig fleet of 216 rigs includes 198 Apex rigs of which we consider 150 to be super-spec rigs.”

At the end of September, the company had drilling rig term contracts estimated at $645 million for future dayrate drilling revenue.

The company also recorded an impairment charge in the pressure pumping segment of $20.5 million after it retired the 300,000 hp of equipment.

“During the third quarter, we undertook a thorough process to evaluate the economic opportunity for our fleet and concluded that in the current market the cost to reactivate this retired equipment would be prohibitive,” Hendricks said. “Any components from this retired equipment with remaining value will be used as parts to support our active equipment.”

Another one-time charge of $17 million was recorded in the directional drilling unit from writing off inventory.

“In our Warrior Rig Technologies business, we implemented several cost cutting initiatives during the third quarter,” the CEO said. “These initiatives included the transition away from our engineering and manufacturing efforts in Calgary, which resulted in a $12.4 million pre-tax, noncash charge related to the write-off of inventory and $2.2 million for severance.”

The company has reduced capital expenditures by around $50 million to the end of the year and now expects to spend $350 million total.