Houston-based Patterson-UTI Energy Inc. is trading shares and cash to acquire MS Energy Services, a directional drilling expert that works in most of the U.S. onshore basins. 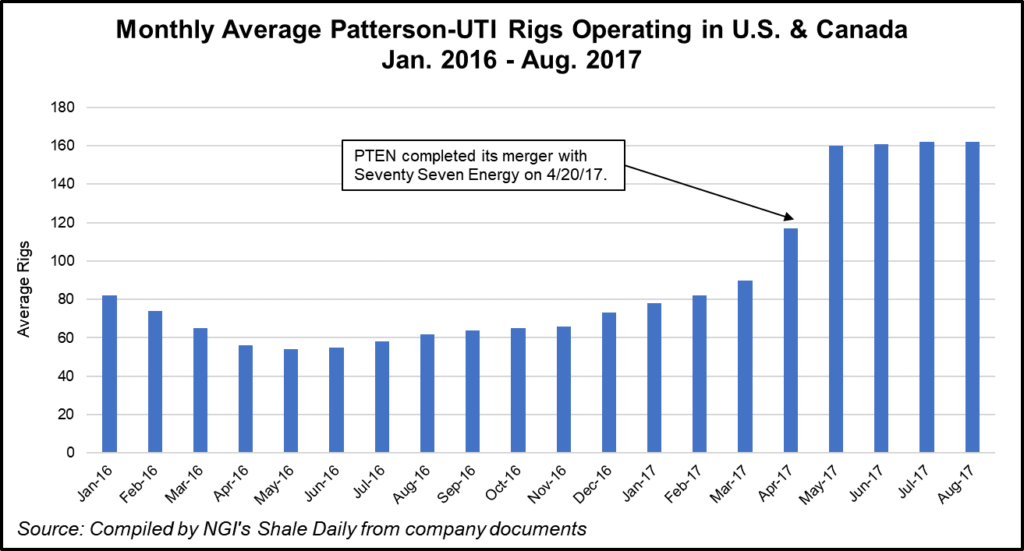 “The acquisition of MS Energy will broaden our service offerings and strengthen our position as a leading provider of oilfield services in the United States,” said Chairman Mark S. Siegel. “Additionally, this transaction increases our exposure to North American unconventional drilling activity. With the increasing proportion of pad drilling and the growing number of horizontal wells per pad, directional drilling is seeing an increase in demand, even in the vertical section of the wells, as the well placement is increasingly important to avoid interfering with other nearby wells.”

MS Energy, which is to become a unit of Patterson-UTI, has differentiated itself in the directional drilling industry “through a strong focus on technology,” said CEO Andy Hendricks. “MS Energy has proprietary mud motor, MWD and survey equipment that was designed, engineered and manufactured in-house. Their internally developed and patented Clean Communications technology enables high-speed electromagnetic MWD telemetry independent of geological formation constraints in pad drilling, which saves exploration and production (E&P) companies considerable drilling time and expense.”

Under terms of the transaction, MS Energy CEO Allen R. Neel would join Patterson-UTI as president of MS Energy; COO Paul Culbreth also would come aboard. Neel and Culbreth cofounded the company that purchased MS Energy in 2004 from previous owners.

MS Energy has seven regional offices across the United States and a manufacturing facility in the Haynesville Shale. NGP made a $100 million equity commitment in 2014 to fund additional growth, at which time MS Energy’s fleet included more than 1,300 directional drilling motors.

The acquisition comes on the heels of several recent directional drilling deals.

Patterson-UTI and its peers “are pushing for more optimization between hardware and software on the rig,” said Evercore ISI’s James West. “Given that horizontal/directional rigs now account for 93% of the active U.S. fleet, and considering the technical standards that E&Ps now require in a more complete land drilling package, it is only fitting that service providers such as Patterson-UTI bring directional drilling (DD) capabilities in-house…

“Not only does the MS Energy acquisition dovetail with the broader trend toward a fully integrated drilling package (on top of the drilling rig), but it also underscores the revenue opportunity…offering auxiliary DD services in conjunction with contract drilling, which is imperative given the shrinking pie of capital expenditures (capex) ascribed for contract drilling relative to total capex.

“This marks another step in a continued transition away from the pure day-rate model where contract drillers continue to differentiate themselves through additional, value-add ancillary services.”