Natural gas forwards basis markets saw March quietly roll off the board and April take its prompt-month position on a light note as market players appear convinced that significantly cold weather will likely come to an end in the next week or so. 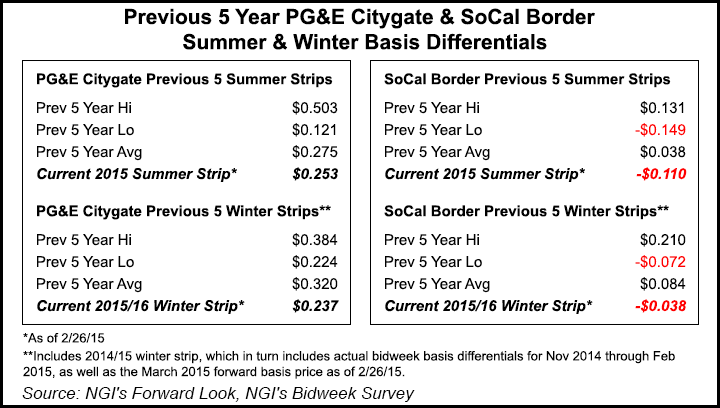 March basis at most market hubs fell no more than 5 cents between Monday and Wednesday’s expiration, although a couple of Midwestern price points dropped close to 20 cents on the back of steep declines in cash prices during that time.

Over in New England, March basis at the constrained Algonquin Gas Transmission citygates jumped about 30 cents as the persistent cold weather and strong demand in the region have consistently supported prices in both the forwards and cash markets this winter.

Even with the 30-cent rise, however, the full value for March sat Wednesday at $9.50/MMBtu, compared with Wednesday’s $25.42/MMBtu average price for gas delivered Thursday, according to NGI’s Forward Look.

And while there are a handful of cold weather blasts forecast for the next week or so, it appears the volatile ride that the forwards markets have been on during the last couple of months is over.

April basis swung no more than 7 cents across the U.S. as forecasters are expecting the bitter Arctic air that has been pushing its way deep into even the southeastern portion of the country to finally retreat into Canada after around March 8.

“There will still be attempts made by sub-freezing temperatures to push into the northeastern U.S. at times, but it’s becoming increasingly likely it won’t have much success pushing further south than that,” forecasters with NatGasWeather said. “Simply put, above-average heating demand will rule through March 7-8, but moderating temperatures are expected to drop natgas use considerably and much closer to normal for the second week of March, which will lead to longer-term bearish weather sentiment after the current period of cold finally breaks.”

Even the typically volatile Algonquin saw April basis pick up just 3.7 cents from Monday to Thursday to reach plus 67.4 cents/MMBtu, while May dropped 10.6 cents to minus 32.4 cents/MMBtu.

Elsewhere in the Northeast, Transco zone 6-New York April basis fell 6.9 cents between Monday and Thursday to reach minus 25.1 cents/MMBtu, while May slipped 1.7 cents to minus 25.6 cents/MMBtu.

The weakness in New York prices comes even as some production in the region remains offline due to the recent cold blasts.

“Most of those declines are in West Virginia, but disruptions are being seen in southwest Pennsylvania, too,” Margolin said.

And while he could not speculate as to how long the supply disruptions would continue, Margolin said, “Temperature forecasts for the Northeast for next week suggest the worst is over.”

In the Midwest, another area hit by a string of winter storms, prices also fell amid waning demand.

Chicago citygates April basis was down 4.5 cents to plus 1.3 cents/MMBtu, while the balance-of-summer (May-October) package was down 1.2 cents to minus 9.7 cents/MMBtu.

At Michigan Consolidated, April fell 4.5 cents to plus 13.9 cents/MMBtu, and the balance of summer slipped 2 cents to minus 1.3 cents/MMBtu.

Over in the West, which has been largely unscathed by winter weather this season, prices at both the Pacific Gas & Electric citygates and the Southern California citygates were marginally lower across the curve, slipping no more than 2.5 cents.

This is noteworthy due to the myriad bearish fundamentals at play in the region. The most obvious of these is the mild winter weather that has led to the region having a surplus of storage inventories compared with both year-ago levels and the five-year average.

SoCal inventories currently stand at 87.87 Bcf, a 64.7 Bcf surplus to last winter and 22.6 Bcf above the five-year average for this date, according to Genscape.

Genscape shows PG&E inventories at 131.28 Bcf, an 82.2 Bcf surplus to last winter and 32.5 Bcf above the five-year average for this date.

Another, perhaps lesser known factor at play in the West is the growing role of non-hydro renewable sources on the grid, particularly in California, which recently set a record for solar output.

“This was notable not only for the pace of growth in California solar, but the fact they were able to generate so much power during the winter, when the sun angle is at its lowest,” Genscape’s Margolin said. “It portends significant strength for the summer. There’s also relatively flat load growth. Some of this is due to the efficacy of demand-management and efficiency programs, but there’s also a lot of solar growth occurring.”

The fact that prices have yet to post more substantial declines could be due to the potential for coal-to-gas switching this summer and the gloomy state of hydro supplies.

According to the Energy Information Administration, forecasts for the water supply at nearly every major water gauge in the states of California and Nevada were less than half of average seasonal norms as of Feb. 5.

In addition, snowpack (an indication of how much water will be available to fill reservoirs and power hydroelectric generators throughout the year) in the northern Sierra Nevada range is about one-fifth of normal for the hydrological year that runs from October 2013 through September 2014.