Permian pure-play operator Parsley Energy Inc. said it will acquire more than 22,900 net acres of bolt-on acreage in the Midland and Southern Delaware Basins for $359 million in cash. Parsley also raised its full-year production guidance for 2016 to incorporate the acquisition’s current net production of about 2,300 boe/d. 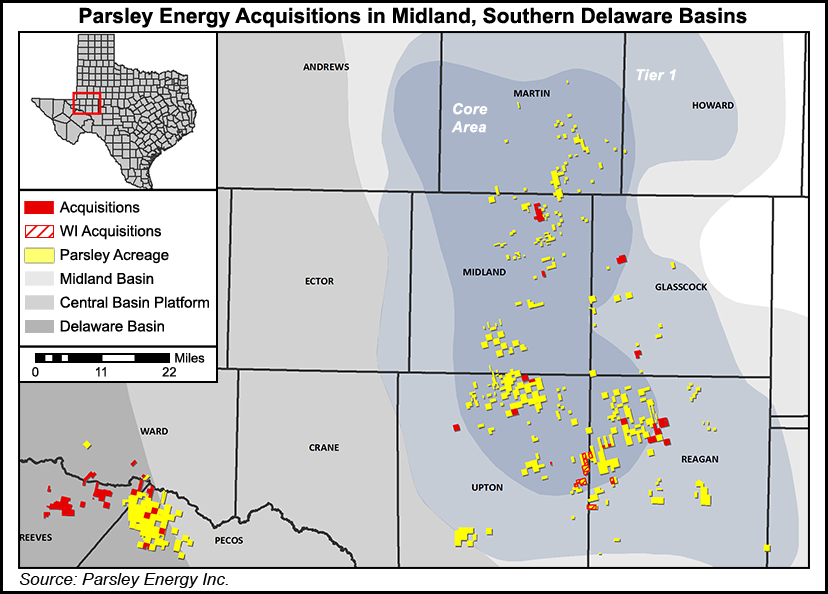 “These additions extend our running room in the Midland Basin and provide the critical mass necessary to make the Southern Delaware a core part of our ongoing development program,” said Parsley CEO Bryan Sheffield. “Together, the acquired properties increase our net acreage by 20%, and all have top-tier return potential.”

Broken down by play, the deal includes 14,197 net acres in Texas’s Reeves and Ward counties prospective to the Southern Delaware Basin, which Parsley will purchase for approximately $144 million. The Southern Delaware portion includes estimated current net production of about 1,200 boe/d from seven horizontal wells and 20 vertical wells.

Parsley will also acquire approximately 700,000 drillable lateral feet, based on projected horizontal drilling inventory in one Wolfcamp formation flow unit, and also incremental value from additional Wolfcamp flow units and multiple targets in the Bone Spring formation. One drilled but uncompleted horizontal well is also included in the deal.

In the Midland Basin, Parsley will acquire 8,711 net acres in Texas’s Glasscock, Midland, Reagan and Upton counties for approximately $215 million. Estimated current net production from the Midland assets is approximately 1,100 boe/d from two horizontal wells and 77 vertical wells. The company will also add 257 net horizontal drilling locations, and will extend eight existing horizontal drilling locations by about 5,000 feet on average.

The Midland assets will also include four drilled but uncompleted horizontal wells at closing. A fifth horizontal well is to be completed by closing. Parsley reported that select offset wells in the Midland acreage demonstrated 24-hour IP rates per thousand completed feet ranging from 236-281 boe in Glasscock County; 193-195 boe in Midland County; 254-553 boe in Upton County; and 176-270 boe in Reagan County.

Once completed, Parsley estimates the acquired producing wells, coupled with those being acquired that still need completion, will add approximately 1,500 boe/d to the company’s production in 2016, so it raised its full-year production guidance from 30,000-33,000 boe/d (see Shale Daily, Feb. 29) to 31,500-34,500 boe/d. Parsley also revised its capital expenditure (capex) budget for the year — increasing it from $380-430 million to $410-460 million — to reflect the additional cost of several incremental completions, plus spending on associated infrastructure and facilities. The additional capex will also go toward supporting ongoing development on the acquired properties.

On Tuesday, Plano, TX-based Torchlight said it had signed an agreement to purchase a 66.66% WI and take over operations on about 12,000 gross (7,999 net) acres in 19 contiguous sections in the Midland Basin from McCabe Petroleum Corp., 100% of which will be operated. The acreage was previously acquired by McCabe from a farm-out agreement. Torchlight will also acquire a 75% net revenue interest.

“We continue to leverage our network of strategic partners — McCabe being a primary example — to find opportunities that because of size and maturation profile likely would not have been presented otherwise,” said Torchlight CEO John Brda. He added that the company “remains focused on the development of our existing assets, but will continue to be opportunistic when presented with accretive opportunities or those that value the company at forward looking prices.”

According to Torchlight, the acquired acreage has the potential to yield up to 300 horizontal drilling locations to target the A and B intervals of the Wolfcamp formation. As an upside, the acreage is also prospective to the Dean and Leonard formations.

Under a continuous drilling clause on a lease starting in July 2016, Torchlight will be obligated to drill one well — vertical or horizontal — every six months to hold the entire 12,000 gross acre block. Meanwhile, McCabe will receive total consideration of 1.5 million warrants to purchase Torchlight common stock, with an exercise price of $1.00 and a back-in after payout of 25% WI. Torchlight disclosed that the president of McCabe is currently its largest shareholder.

Torchlight said it plans to initially drill two vertical test wells, but its long-term plans are to develop the field through horizontal drilling. A third well will be drilled horizontally, with full scale development to immediately follow. The company said it believes potential estimated ultimate recovery (EUR) rates in the acquired assets will be more than 100,000 bbl per 1,000 feet of lateral, and estimates horizontal well costs will range from $5.5 million to $6.5 million.

Torchlight added that it will seek a joint venture (JV) partner to develop the acreage and to provide capex funding. It plans to “begin discussions with suitors immediately and will consider both operating and non-operating financial partners.”

According to Torchlight’s website and its investor presentation from March, the company holds a 47.5% WI on 168,000 contiguous acres for its Orogrande Basin Project in Hudspeth County, TX, which overlies the Wolfcamp and WolfPenn formations. It also owns a 75% WI on a 1,080-acre block and a 50% WI on a 280-acre block for its Marcelina Creek Project in Wilson County, TX, which is prospective to the Eagle Ford Shale, the Austin Chalk, the Buda Limestone and the Georgetown formation.

Torchlight is also in a JV with Ring Energy Inc. to develop the Hugoton Field, in Kansas’s Finney, Gray and Haskell counties, and has a 50% WI on more than 17,000 acres there, which is prospective to numerous stacked plays, including the Lansing-Kansas City, Marmaton and Morrow formations. It also holds acreage in the Hunton Limestone in central Oklahoma, which it is trying to sell.