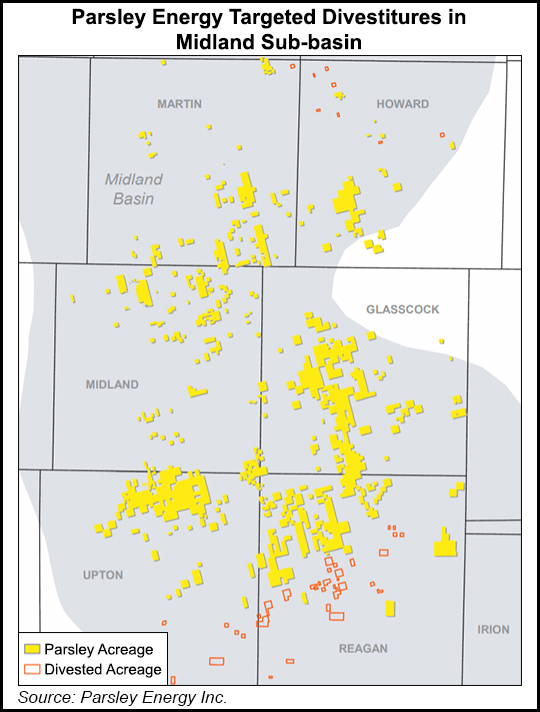 The Austin, TX-based independent is divesting about 11,850 net acres in central Reagan County, southern Upton County and northern Howard County. The sales are expected to close by the end of the year.

“This is quality acreage, but for us it wasn’t part of our near-term development plan,” CFO Ryan Dalton said during a conference call last Friday to discuss third quarter performance. “We think it makes sense to raise cash that can be invested in higher priority projects.”

The transactions include multiple divestitures and a cash-and-asset trade. Production on the divested and traded assets totaled about 1,200 boe/d in 3Q2018, 55% weighted to oil. The assets include 256 net development locations, with an average lateral length of 5,100 feet, targeting the Lower Spraberry and the Wolfcamp A, B and C zones.

During 3Q2018, Parsley spud 46 wells and placed online 46 gross operated horizontal wells (98% working interest) with an average lateral lengths of 9,400 feet. Thirty-eight of the wells turned to sales targeted the Midland sub-basin, while the rest were drilled in the Delaware sub-basin.

The company made note of six wells that were turned into production during the quarter in Martin County, TX. The wells comprised three-well pads for the Hayden and Strain Ranch, which targeted the Wolfcamp A and B zones in a staggered configuration.

“This is a firm endorsement of the rocks as we ramp up development in this area,” said COO David Dell’Osso. Parsley, he said, also has begun a water recycling pilot program, with than 100,000 barrels of recycled water used to complete the Hayden wells.

“As we gradually transition to larger pads sizes in Martin County and elsewhere, scaled-up water recycling capabilities will be an important tool in the toolkit,” Dell’Osso said.