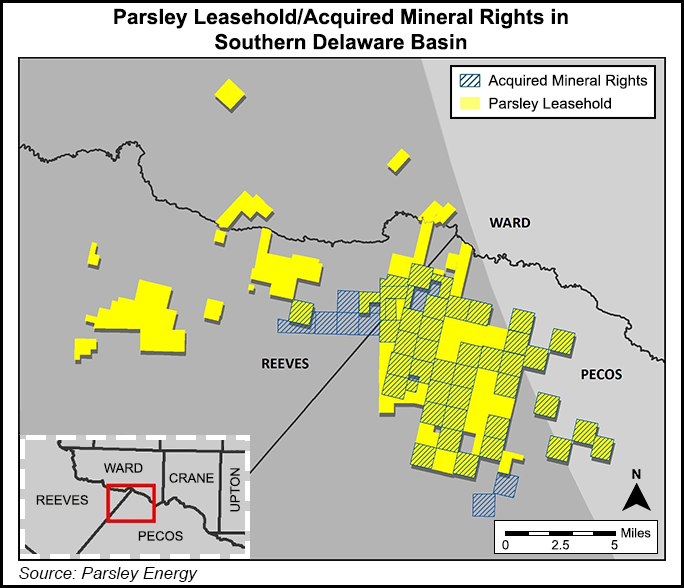 In one transaction set to be completed in mid-July, the independent agreed to pay $280.5 million to add 29,813 acres of mineral rights under existing acreage and adjacent land in the Delaware sub-basin. It also paid $9 million for 885 net acres in the two counties. The sellers were not disclosed.

“The pending minerals acquisition encompasses what we view as very promising portions of Parsley’s Southern Delaware acreage and represents an important step toward unlocking the full value of Parsley’s Southern Delaware assets,” said CEO Bryan Sheffield, who founded the company in 2008. “Increasing netbacks per boe with no incremental capital expenditures or operating expenses elevates the return profile on the associated acreage, making it among the most compelling in our corporate portfolio.”

The mineral rights transaction, with an average royalty interest of 17.5%, would boost Parsley’s net revenue interest (NRI) on about 186 horizontal drilling locations in the upper Wolfcamp interval, assuming one flow unit and 660-foot well spacing. The potential for additional flow units is being assessed. The average NRI on horizontal drilling locations associated with the acquired mineral rights would increase to 92.5% from 75%.

Estimated net production currently from the acquired mineral rights is 280 boe/d; 82% of the acreage represents Parsley leasehold. Surface rights also were acquired on 80% of mineral acreage, eliminating compensation for surface damages and water procurement, among other costs, and also allowing for optimal well and facility placement.

“In light of encouraging production trends on our first operated and nonoperated wells in the Southern Delaware Basin and with current AFEs [authority for expenditures] down to $5.7 million for a horizontal Wolfcamp well with a 7,000-foot lateral in the Southern Delaware, we anticipate that the acreage associated with the mineral interests we are acquiring will represent a central focus of our development program from this point forward,” Sheffield said. “The acquisition of surface rights on the majority of the mineral acreage further supplements its development potential.”

In the $9 million transaction, which was completed earlier this month, Parsley brought its working interests associated with the mineral acreage in the acquired properties to 100% and NRI to 87.5%. Assuming one flow unit in the upper Wolfcamp target interval, the acquired working interests “translate to an additional 10 net horizontal drilling locations with an average lateral length of 7,250 feet, management said.

The latest transactions follow one by Parsley in April, after it agreed to pay $359 million for bolt-on acreage in the Permian’s Midland and Southern Delaware sub-basins also in Texas (see Shale Daily, April 5). The deal included 14,197 net acres in Reeves and Ward counties. In late 2015, it paid $148.5 million to acquire more than 5,000 net acres in the Permian (see Shale Daily, Dec. 10, 2015). The Permian pure-play, whose output was 63% weighted to oil last year, raised its capital expenditures year/year to $380-430 million from $225-250 million in 2015 (see Shale Daily, Feb. 29). In the February announcement, Parsley said it planned to complete 60-70 horizontals in the Permian this year — up to 65 in the Midland and up to five in the Delaware.