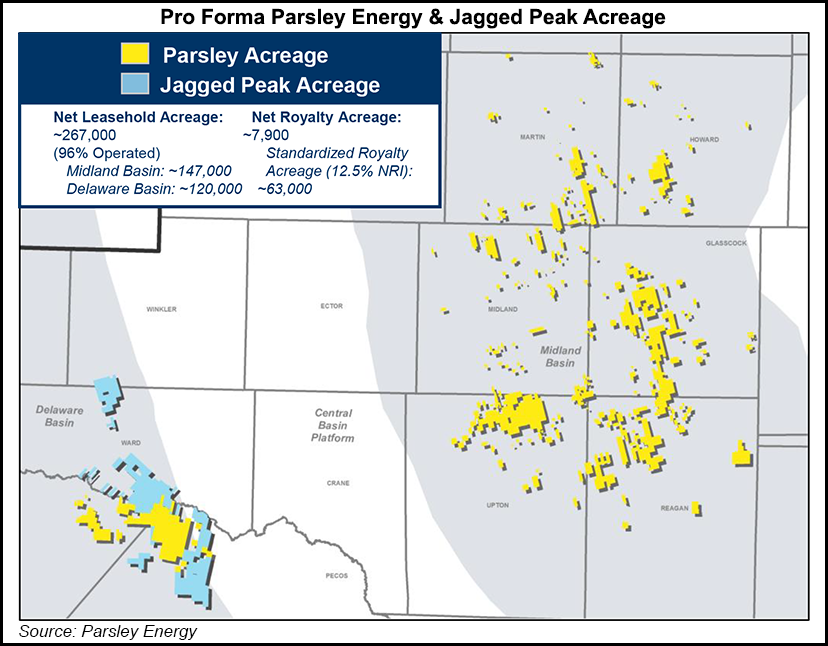 “Parsley’s 2019 action plan was a resounding success as our team delivered a step-change improvement in capital efficiency and inflected to free cash flow generation ahead of schedule,” CEO Matt Gallagher said in an update. “We remain committed to an enhanced free cash flow profile in 2020, and, importantly, we have reinforced this commitment with a meaningful increase to our regular dividend program.”

The board has voted to increase the quarterly dividend by 2 cents, to 5 cents/share. Now on the docket is improving on capital efficiencies from last year, including free cash flow (FCF) generation.

Total development spending for 2020 has been reduced slightly from a preliminary outlook issued last fall to $1.6-1.8 billion from $1.6-1.9 billion, with two-thirds (65%) of the spend earmarked for the Midland and about one-third targeting the Delaware.

“Integration of our Jagged Peak acquisition has our urgent focus and I am proud of our teams’ collective dedication and efforts out of the gate,” Gallagher said. “Ultimately, though, ‘well done’ is better than ‘well said.’ We look forward to delivering on our 2020 objectives in the coming quarters.”

During 4Q2019, Parsley placed on production 37 gross operated horizontal wells, more than half coming online in December. Capital expenditures in the final three months were estimated at $275-285 million, translating to full-year 2019 capital expenditures below the low end of guidance at $1.40-1.47 billion.

Fourth quarter development spending decreased sequentially because of lower well costs and less facilities and infrastructure spending. The cost structure in the Delaware is coming down, management noted. A recently completed four-well project in Pecos County, TX, had an estimated average drilling, completion and equipment cost of under $1,100/lateral foot.

“The Parsley team finished the year strong, carrying efficient operational momentum through year-end and paving the way for a compelling start to 2020,” said COO David Dell’Osso.

The development plan for this year mirrors a preliminary outlook issued in October, which is to deploy on average 15 development rigs and up to five fracture spreads. Parsley also provided initial guidance on projected unit costs for this year. Under a baseline capital budget assumption of West Texas Intermediate averaging $50/bbl, management expects to generate FCF this year of at least $200 million.

Fourth quarter results are scheduled to be issued on Feb. 19, followed one day later with the regular conference call.

The update was “mostly positive,” said analysts with Siebert Williams Shank & Co. LLC. Parsley is offering a “compelling free cash flow trajectory,” but analysts want to see “a quarter or two of smooth execution and integration” of the Jagged Peak business, “especially given the high investor expectations and a roughly in line valuation compared to peers.”