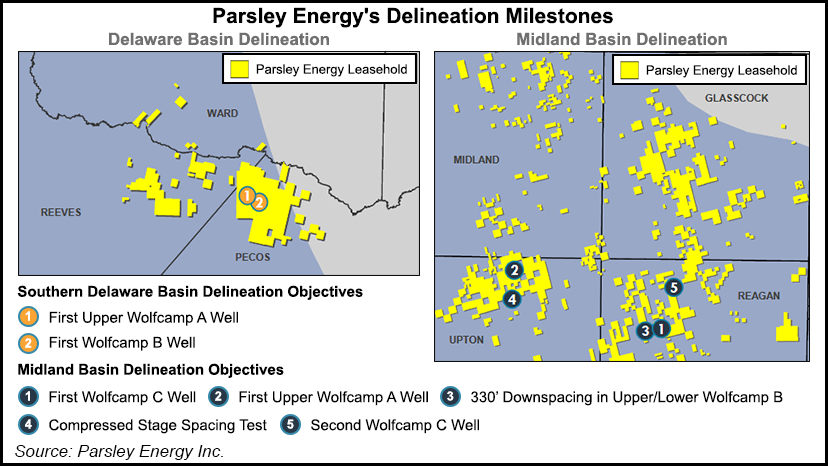 “We think growth of this magnitude should only come from profitable and capital efficient operators,” CEO Bryan Sheffield said during an earnings call Thursday to discuss 2Q2017. “When you look across the E&P landscape, Parsley is clearly among the lead on these dimensions. Only a couple of operators are assuming more value per boe than Parsley does…”

It doesn’t mean, he said, “that we will grow no matter what.” It means “that given our positioning at the low end of the cost curve, and the top end of the margin spectrum, it will make sense for everyone to grow, [and] it should make sense for Parsley.”

About half of the wells brought online either targeted new zones or were drilled and completed using new spacing configurations.

In the Midland sub-basin, Parsley said a successful stack test confirmed the presence of two target intervals within the Wolfcamp A formation. The Elwood 16-21-4107H and the Elwood 16-21-4207H were completed in Upton County, TX, with 1.5-mile laterals. After 30 days of production, the wells are currently producing an average of 1,200 boe/d, which Parsley said was consistent with its 1 million boe type curve.

Management is encouraged by the early results and expects to test two additional stacked Wolfcamp A wells in the second half of 2017 on top of two wells stacked in the Wolfcamp B formation. Further success in the area could add to the drilling inventory there.

The Wolfcamp B was also the site of a successful downspacing pilot. An eight-well project in neighboring Reagan County, TX, included four wells targeting the Upper Wolfcamp B atop four wells trained on the Lower Wolfcamp B, with 330-foot lateral spacing between the wells. Parsley said to date, seven of the eight wells achieved peak 30-day production rates that on average are tracking at 84% of the average rate for offset Wolfcamp B wells using 660-foot spacing.

Parsley’d first well targeting the Wolfcamp C formation, the Taylor 45-33-4601H, recorded cumulative production of 370,000 boe after 150 days, 58% weighted to oil. The Taylor well is still flowing naturally at nearly 2,000 boe/d, and is expected to achieve payout within its first six months of production.

A second well to target the Wolfcamp C, the Paige 13A-12A-4810H, has yet to reach a peak 24-hour production rate after several days online. But the company said the Paige well is already producing more than 1,300 b/d of oil and registering favorable pressure trends during its initial flowback period.

After 40 days, the Lower Wolfcamp A and B wells, which were drilled with one-mile laterals, had average production of 26,000 boe. Meanwhile, after 50 days the wells targeting the Upper and Lower Wolfcamp A, drilled with two-mile laterals, produced 65,000 boe on average. The former wells were in line with the company’s standalone average, while the latter were about 20% less for that timeframe.

Sheffield said the company was “well positioned for the rest of the year and beyond,” in part because its cash flows are protected and the company owns three rigs. It also has a couple spot rigs under contract, any of which could be laid down quickly if the company decided to do so. Parsley also has a large drilling inventory, no near-term debt maturities and ample liquidity — $1.5 billion, including $503 million in cash on hand. The company has $997 million undrawn on its revolver.

“We’re frequently asked about activity trends at various oil price thresholds,” Sheffield said. “We don’t always think about it that way, as we’re more tuning to changes in leverage and liquidity. But as of now, we’re above $40 oil; we’re likely to slow down relative to the pace we anticipated for the rest of the year. Above $50 oil, we’re likely to speed up. What we do in $20, $40 or $50 oil depends on the cost environment and the state of our balance sheet and hedge position, among other things.

“In any case, acceleration or deceleration is likely to be incremental, not abrupt. So we really like where we stand over the second half of the year.”