Environmental groups opposed to fossil fuel extraction and states that have taken a stand against the oil and natural gas industry are only likely to increase their efforts going forward, despite a series of recent setbacks for their cause at FERC, panelists said at Shale Insight in Pittsburgh last week. 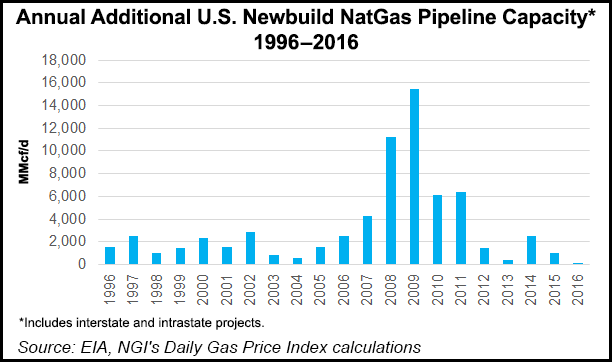 The Federal Energy Regulatory Commission issued a draft supplemental environmental impact statement (EIS) on Wednesday for the Sabal Trail Pipeline and two related expansions. The Commission’s EIS addresses a federal court’s ruling that it failed to adequately analyze the downstream greenhouse gas emissions from the pipelines, but refused to use the Social Cost of Carbon methodology that environmental groups want incorporated in FERC reviews.

“Environmental groups have already latched onto this Sabal Trail decision and they’ve begun relying on it in their filings to FERC,” said Anthony Holtzman, a partner and energy attorney at K&L Gates LLP, who joined a panel on pipeline disputes during the conference. “They’re asserting that the agency has improperly issued a certificate for the Atlantic Sunrise project. You can rest assured, my friends, that environmental groups will continue to rely on this decision to contest projects and FERC decisions in the future.”

Since the August ruling on Sabal Trail, the Sierra Club has referenced the decision in its opposition to not just the Atlantic Sunrise project, but to the Mountain Valley Pipeline, Nexus Gas Transmission pipeline and the Atlantic Coast Pipeline as well.

FERC restored its quorum after six months in August after two of President Trump’s nominees were confirmed and sworn-in. Two others are soon expected to join the Commission, giving it a full five members and a Republican majority. Soon after it got back to work, commissioners weighed-in officially on New York’s stance against natural gas, issuing an order that found the state waived its authority to issue a decision on Millennium Pipeline Co. LLC’s water quality certification (WQC) for the Valley Lateral Project because it took too long.

The order reversed the New York State Department of Environmental Conservation’s (DEC) Aug. 30 denial of the WQC, which came nearly two years after Millennium first filed its application. Other projects, such as the Constitution Pipeline and the Northern Access expansion project, which were also denied WQC by New York, have argued for a waiver before FERC and in court. Environmentalists have built on the DEC’s moves, by trying to weaponize WQC and influence approvals in other states, which issue them under the federal Clean Water Act.

Holtzman said the industry should expect more of it, noting that the DEC is likely to contest FERC’s determination in court. The agency said at the time the Commission waived its authority that it was considering its legal options.

Half a year spent without a quorum at FERC, regulatory delays and outright denials for pipeline projects have investors second guessing the midstream space, said Katie Bays, a senior energy analyst at Height Securities.

“The promise of energy infrastructure hangs on the regulatory risk,” she told the audience. “If you can get comfortable with a project — that it’s going to make it through these kinds of hurdles — then you can get excited. Unless they can find that comfort, a lot of clients are not getting involved. Right now, I think caution is the primary feeling that I get.”

She said investors have also been impatient with FERC’s slow action on natural gas pipelines that have yet to be approved, even though there’s nothing unusual about the pace at which the Commission has resumed its work.

Kinder Morgan Inc. spokesman Allen Fore, who sat on the panel as well, said the industry should take a stronger hand in allaying those kinds of concerns and wrestling the narrative back from environmental groups. He noted that it’s crucial for companies to get more involved in the permitting process at all levels and get more representatives out in the field to address local concerns in a timely manner.

Fore said the industry is only as good as its “least successful company.” He alluded to the troubles Energy Transfer Partners LP has had in Ohio, where it’s facing a steep fine for a major spill of drilling mud during construction of its Rover Pipeline earlier this year.

“The accountability of companies to do the right thing doesn’t affect one project, it affects the entire industry,” he said. “We’re dealing with this in Ohio right now. Another pipeline company that’s building very near us has had serious issues with the [Ohio Environmental Protection Agency] — serious issues. We have not, but we’re building in some of these places. How do you think that affects us?”