The economic impact of the Covid-19 Delta variant already threatens demand for oil and could dampen consumption of U.S. natural gas, particularly exports to Asia, if new restrictions imposed to slow the virus’ spread in China drag deep into 2021. 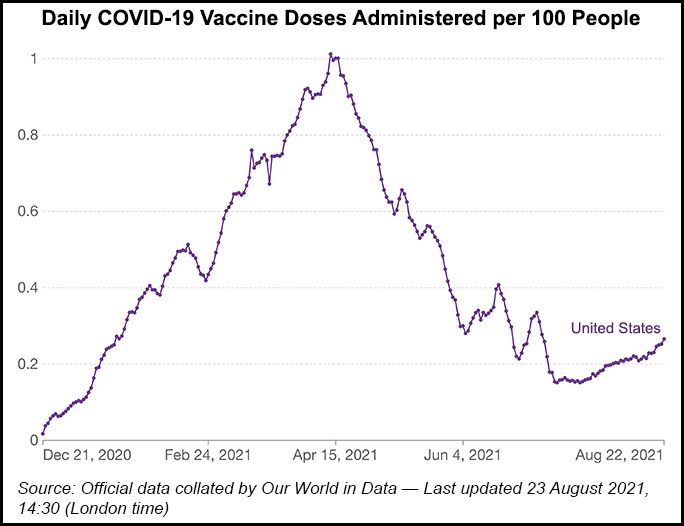 In the United States, overall case totals and hospitalizations remain lower than the highs reached last winter before vaccine campaigns were widespread. However, reported infections are on the rise in August across the country, and Americans hospitalized with severe cases of coronavirus are surging in states with below average inoculation rates.

Over the first two weeks of August, the average number of new U.S. hospitalizations increased nearly 60% from the start of the month, according to Johns Hopkins University analyses of state and federal data. Louisiana and Florida posted record-high hospitalization rates this month as the fast-spreading Delta variant afflicts primarily unvaccinated residents, who on average are younger and sicker than those infected in 2020, both states have reported.

Similar challenges have hampered swaths of Europe and Asia this summer, prompting forecasters to lower expectations for oil demand. Concerns about possible demand interruptions for natural gas have bubbled up as well this month.

On the crude front, for the week ended Aug. 13, overall domestic demand increased 10% week/week, the U.S. Energy Information Administration (EIA) said in its latest Weekly Petroleum Status Report. Gasoline consumption, however, fell from recent 2021 highs to 9.3 million b/d last week, down 97,000 b/d from the prior week and 200,000 b/d below the average level from the prior six weeks. ClearView Energy Partners LLC analysts said the drop could signal rising case counts “are negatively impacting demand.”

A University of Michigan survey of American consumer sentiment dropped 13.5% in the first half of August from July, among the steepest declines since the index’s inception in 1978. Larger index declines occurred only during the economy’s shutdown in April 2020 (-19.4%) and at the depths of the Great Recession in October 2008 (-18.1%).

Citing the proliferation of the Delta variant, University of Michigan economist Richard Curtin called it a “stunning loss of confidence” that spanned income, age, education and geographic subgroups. “Consumers have correctly reasoned that the economy’s performance will be diminished over the next several months, but the extraordinary surge in negative economic assessments also reflects an emotional response, mainly from dashed hopes that the pandemic would soon end,” Curtin said.

The pessimism, he said, is rooted in worries that state governments will impose new business restrictions to combat the virus, potentially curbing spending and travel – the latter impacting demand for gasoline and jet fuel derived from oil. Already, for example, California will require proof of vaccination or a negative virus test to attend large indoor events, and several counties in the state have reinstated indoor masking requirements for everyone.

More employers, too, are beginning to require employees to show proof of inoculation. In the energy sector, Chevron Corp. confirmed to the Wall Street Journal Monday that it is requiring expatriate employees and workers traveling internationally to be vaccinated. Some U.S. onshore and offshore workers in the Gulf of Mexico will have to get vaccinated by November.

Retail sales, which include purchases at stores and online, declined 1.1% last month compared with June, according to the U.S. Commerce Department.

The Organization of the Petroleum Exporting Countries (OPEC) maintained its forecasted demand level in a report this month, saying oil demand would rise by 5.95 million b/d this year, or nearly 7%. However, the cartel emphasized emerging pandemic threats that could alter its outlook. “The path of the COVID-19 pandemic will be the overarching factor impacting the near-term pace of the recovery,” with the “potential emergence of new variants and/or mutations posing a particular risk,” OPEC said.

Brent crude prices are up more than 30% in 2021, lifted in part by a rise Monday. But the international oil benchmark is down about 10% in August, following a multi-day swoon last week.

While bolstered by strong weather-driven demand much of this summer amid heat waves, analysts say the experience of early 2020, when the pandemic took hold, suggests that natural gas prices could come under pressure from a sustained coronavirus surge as well, particularly if major destinations for U.S. LNG impose lasting lockdowns.

China reported nearly 900 virus cases over the first two weeks of August — more than double the total for all of July, according to the country’s state media. The Chinese government is now enforcing strict stay-at-home policies in outbreak zones and is limiting travel between most provinces and suspending flights in some regions. This has diminished fuel demand, according to Rystad Energy.

“The swift restrictions in China are causing a complete collapse in domestic aviation, which has lost the momentum of its recovery and is now almost back to the lows of the pandemic’s first wave,” said Rystad Energy analyst Simen Eliassen.

China’s Ministry of Transportation also ordered all crews working at the country’s ports to have immunization certificates or negative tests before they can load or unload cargos, a development that could hinder the pace of both exports and imports to the world’s second-largest economy — including shipments of U.S. LNG. China is the biggest consumer of American LNG.

The last time such restrictions were imposed, in the spring and summer of 2020, the “impact on LNG trade was severe,” said the Gas Exporting Countries Forum’s Galia Fazeliyanova, energy economics analyst.

“Though the overall LNG market was much more robust compared with the oil market through the course of the pandemic, there was significantly increased volatility in traded volumes,” Fazeliyanova added.

The potential for strict lockdowns in the United States appears slight, for now, given little appetite for a repeat of 2020. But should virus cases continue to mount into the fall, Jefferies analyst Christopher Wood said the Delta variant would present a “major risk.”

More employers could delay return-to-office plans and Americans leery of the variant could opt to avoid crowds and scale back spending. Apple Inc., for example, said last week it postponed return-to-work until at least early 2022. Such delays could hinder commercial consumption of natural gas.

Delta’s impact “on Americans’ psychology is in terms of the sudden shock realization that life is not going completely back to normal,” Wood said.

Natural gas futures in the United States were up about 60% on the year entering August. But through trading last week, futures this month were down more than 2%.

Inoculation rates in the United States peaked in April of this year and, while ticking up this month, remain less than half of the highs last spring, according to the U.S. Centers for Disease Control and Prevention.

The energy sector, however, is hopeful that further vaccination efforts will minimize Delta’s economic impact.

The Food and Drug Administration said Monday the vaccine developed by Pfizer Inc. and partner BioNTech SE had received full approval, marking the first to win the government’s unconditional nod. Vaccines had been approved on an emergency basis. The hope now is that the approved shot, for people 16 years and older, will galvanize more people to get vaccinated. More employers may now require inoculation as well.

Already, the U.S. military plans to mandate vaccination for all service members following the FDA approval of the Pfizer vaccine, according to the Pentagon.

The Texas Independent Producers and Royalty Owners Association (TIPRO) on Monday said Texas upstream employment for July 2021 totaled 175,100, an increase of 1,500 jobs from June and the third consecutive month of growth. But the trend could soon be interrupted.

The Delta variant “will impact the near-term pace of recovery to some degree, including Texas oil and natural gas job growth, but data suggests that vaccinations, natural immunity and public caution will help keep the latest variant at bay and avoid the major economic disruptions we experienced previously,” said TIPRO President Ed Longanecker.

“We continue to anticipate a strong recovery in world oil demand this year and further growth in 2022,” he added. However, “prominent U.S. producers will maintain a highly disciplined approach to their production goals and we can expect OPEC to do the same in efforts to reach and maintain global supply demand equilibrium.”