Shifts in electricity use imposed by the coronavirus pandemic could lead to long-term changes and lighter overall demand for years, according to a new report from Columbia University’s Center on Global Energy Policy. 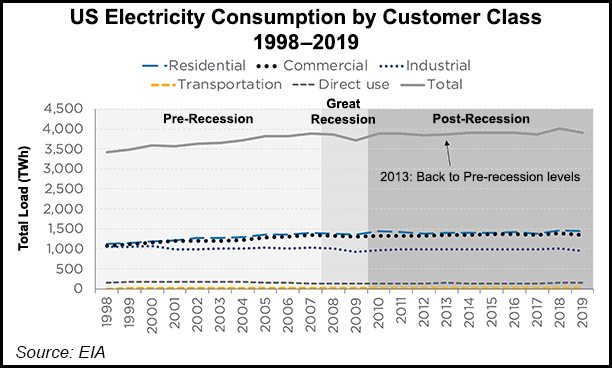 “Demand has declined, and usage patterns have been altered — changes that could remain even after the pandemic ends,” wrote researchers A.J. Goulding, Mugwe Kiragu and David Nour Berro.

They argue that the public health crisis is likely to result in a long-term decline in annual electricity consumption and accelerate changes in the structure of electricity demand that were already underway. Natural gas is the leading fuel for domestic electricity.

The researchers used as a barometer the last steep downturn, the 2008 financial crisis and ensuing recession. While electricity consumption grew annually by an average 1.7% in the preceding 10 years (1998-2007), it advanced only 0.5% on average in the 10 years following the downturn.

The drop was imposed by economic disruption. The slow recovery, combined with ever-advancing technology that boosted energy efficiency, caused the weaker growth from 2010 on.

“Experience from the global financial crisis suggests” demand “is unlikely to immediately revert to previous levels following the impact of Covid-19” and “may be further dampened,” researchers said.

The leading change created by the coronavirus is a shift in demand away from commercial usage to residential. Because commercial needs were greater prior to the pandemic, the researchers expect the shift to residential will result in overall lighter electricity demand this year and next – and perhaps beyond 2021 – as fewer people work in office buildings, more retail sales move online and away from stores, and hotels gradually recover.

Additionally, researchers said, changes in the timing of peak demand with more Americans working or studying from home, and fewer people in offices and schools during set hours, could make it more challenging for independent system operators (ISOs) to efficiently meet surges in power needs.

“The more that patterns deviate from historical behavior, the harder it is for ISOs to optimize the power system,” they wrote.

Though the researchers did not make specific forecasts, declining electricity use would impact natural gas demand.

Gas-fired generators contributed more than any other source to the nation’s electricity capacity last year, the U.S. Energy Information Administration’s (EIA) annual survey of electric generators, released earlier this month, found. Natural gas was used for 39% of electricity generation in 2019.

With the exceptions of Vermont and Hawaii, all states have at least one utility-scale natural gas electric power plant. Texas, Florida, and California, which lead the nation for the most electricity consumption, each have more than 35 GW of gas-fired capacity, EIA said.