U.S. exploration and production (E&P) companies are cutting capital expenditure (capex) by 35-40% from 2019 as oil prices continue to get hammered and demand is destroyed by the coronavirus pandemic, but spending reductions could be even harsher south of the U.S. border. 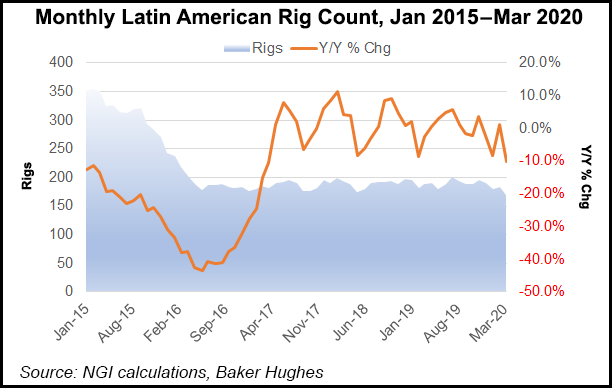 “We anticipate that the least affected markets will be the OPEC countries in the Middle East, while offshore Africa and Latin America may see double-digit declines this year,” Halliburton Co. CEO Jeff Miller said Monday.

Houston-based OFS Baker Hughes CFO Brian Worrell agreed. “Internationally, we expect that the combination of lower oil prices and the impacts from the Covid-19 pandemic to contribute to a double-digit decline in spending in 2020 versus 2019,” with Latin America and Sub-Saharan Africa “to see the sharpest near-term declines, followed by the North Sea.”

Some $65 billion of investment in Latin America could be put at risk of disappearing in the short term as projects get delayed, according to IHS Markit analysts, with Brazil most likely to be impacted due to the complexity of developing its deepwater pre-salt field.

Latin America produces around 8 million b/d of crude, with Mexico and Brazil together accounting for half of this amount.

The global majors have all announced capital expenditure (capex) cuts ranging from 10-25%.

Italy’s supermajor Eni SpA, which has operations in Mexico, Venezuela, Ecuador and Argentina, has cut capex by 25% for the year, or by around $2.2 billion because of the “sharp decrease in commodities prices and the foreseeable constraints arising from the Covid-19 pandemic,” CEO Claudio Descalzi said.

Eni started producing oil offshore in Mexico last year when it went into early phase production from the shallow water Miztón field in Campeche Bay off southeastern Mexico. Eni had expected to reach a production plateau of 100,000 boe/d from Miztón by 2021.

Norwegian national oil company (NOC) Equinor ASA, with operations in Brazil, Argentina, and Venezuela, reduced capex for 2020 by about 20%, to $8.5 billion from $11 billion. Exploration spending has been cut to $1 billion from $1.4 billion, with operating costs reduced by about $700 million.

ExxonMobil meanwhile has reset its capex at $23 billion, versus original guidance of $33 billion, but has said it will stick to its plan for its prolific offshore Guyana development.

Royal Dutch Shell plc, a major player in Brazil’s offshore through its 2017 acquisition of BG Group, has reduced2020 spending by $5 billion to $20 billion.

France’s Total SA, one of the top natural gas producers in Argentina, has reduced global spending by 20%, or $3 billion for the year.

BP plc, which has upstream operations in Mexico, Brazil and Trinidad and Tobago, cut capex to $12 billion from $15 billion.

Colombia’s 88.5% state-owned oil company Ecopetrol SA will reduce capital by $1.2 billion in 2020 and Brazilian state firm Petróleo Brasileiro SA, or Petrobras, will slash capex by $3.5 billion to $8.5 billion and will also temporarily curb production by 200,000 b/d.

Argentina’s 51% state-owned YPF SA has not announced capex reductions, but reportedly was said to be shutting-in half of its estimated 40,000 b/d production at its flagship Loma Campana field in the Vaca Muerta shale play because of a lack of storage and plummeting demand.

YPF partners with U.S. supermajor Chevron Corp. at Loma Campana. In late March, San Ramon, CA-based Chevron cut capex by 20% across its portfolio, but said at the time that most of its upstream reductions would occur in the Permian Basin.

Vista Oil & Gas, Royal Dutch Shell plc and ExxonMobil have also all reportedly shut-in some of their Argentine wells.

Other NOCs, including Mexico’s giant Petróleos Mexicanos (Pemex), Venezuela’s Petróleos de Venezuela SA (PDVSA), and Ecuador’s Petroecuador, have yet to announce revised capex plans, even as their crude baskets, indexed to U.S. benchmarks, get hammered.

Colombian and Brazilian crudes are indexed to the international Brent benchmark and are thus in a slightly more favorable position as of today.

But state and multinational companies with deep pockets affected by the price environment might consider themselves comparatively lucky. Smaller E&P firms operating in Latin America have seen far steeper cuts.

Canada’s Gran Tierra Inc, with E&P operations in Colombia and Ecuador, withdrew its previously announced full-year 2020 guidance this month and is suspending operations at what it deems nonprofitable wells. In March, the company announced a reduction in capex from $200-220 million to $60-80 million.

Fellow Canadian firm Frontera Energy Corp, which has 40 E&P blocks in Colombia, Peru, Ecuador and Guyana, has reduced planned 2020 capital expenditures by around 60% to a range of $130-150 million.