U.S. annual natural gas production in 2020 declined 1% year/year and averaged 111.2 billion Bcf/d, a reflection in part of the pullback in drilling activity following the demand destruction and downward pressure on prices caused by the coronavirus pandemic. 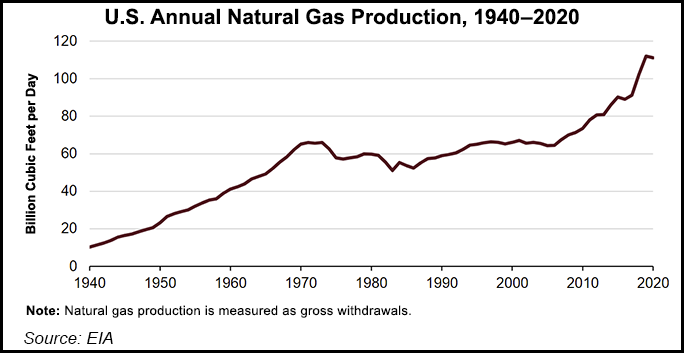 In releasing its latest 2020 estimate, measured by gross withdrawals, the U.S. Energy Administration (EIA) also on Tuesday noted that a robust increase in production during 2019 resulted in elevated volumes of gas in storage and additional stress on prices early in 2020.

The agency said production volumes reached a 2020 low in May of 106.4 Bcf/d, before gradually recovering in the second half the year. By December, EIA said, production had increased to 113.0 Bcf/d, though that marked a monthly high not expected to be sustained on an annual basis this year.

In the previously released Annual Energy Outlook 2021, EIA said its base case outlook assumed that domestic gas production would recover to pre-pandemic levels by 2023 before continuing to rise through 2050, driven by Lower 48 shale and tight resources, as well as associated gas from oil plays.

Under that assumption, the agency said, “more than half of the growth in shale gas production between 2020 and 2050 comes from shale gas plays in the Appalachian Basin in the East region, and most of the remaining growth comes from plays in the Gulf Coast and Southwest regions.”

EIA noted Tuesday that Appalachia remains the largest gas-producing region in the United States and is still expanding. Within the Appalachia region, the agency noted, West Virginia was home to the biggest increase in production last year, up 20% to an annual average 7.1 Bcf/d.

In a separate report, EIA said Texas is off to a challenging start in 2021, following the devastating cold snap that paralyzed swaths of the state’s energy sector in February. Natural gas production in Texas dropped nearly 45% during the week ended Feb. 13, hitting a low of 11.8 Bcf/d on Feb. 17, the agency estimated.