With the expansion of the Panama Canal complete, liquefied natural gas (LNG) leaving the Gulf Coast has a shorter and less costly route to Asian and South American markets. 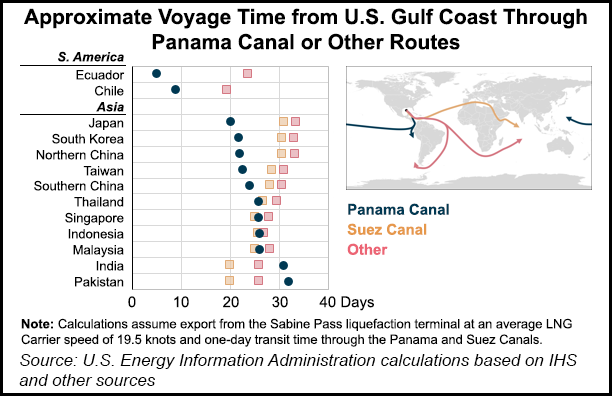 The widened canal opened for business last Sunday (see Daily GPI, June 23). According to a report by Bloomberg, the British Merchant, a BP plc tanker, will be the first LNG vessel to transit the canal, some time in late July. The tanker trip originates in Trinidad & Tobago and will transit the canal to enter the Pacific Ocean, the Panama Canal Authority told Bloomberg.

The canal can now accommodate 90% of the world’s LNG tankers with carrying capacities up to 3.9 Bcf of liquefied gas. Before the expansion, just 30 of the smallest LNG tankers (representing 6% of the current global fleet) with capacities up to 0.7 Bcf could transit the canal. Only the 45 largest LNG vessels — the 4.5-5.7 Bcf capacity Q-Flex and Q-Max tankers used for exports from Qatar — will not be able to use the expanded canal, according to the U.S. Energy Information Administration (EIA).

The wider Panama Canal will also considerably reduce travel time from the U.S. Gulf Coast to South America, declining from 20 days to eight or nine days to Chilean regasification terminals, and from 25 days to five days to prospective terminals in Colombia and Ecuador, according to EIA. For markets west of northern Asia, including India and Pakistan, transiting the Panama Canal will take longer than either transiting the Suez Canal or going around the southern tip of Africa.

The Canal Authority has introduced new toll structures intended to incentivise increased use of the canal by LNG tankers (see Daily GPI, May 1, 2015; Jan. 9, 2015). Transit costs through the canal for an average 3.5 Bcf LNG carrier are estimated at 20 cents/MMBtu for a round-trip voyage, representing about 9-12% of the round-trip voyage cost to countries in northern Asia, according to EIA.

“Transiting the Panama Canal offers reduction in transportation costs to northern Asian countries such as Japan, South Korea, Taiwan, and China and may offer some minimal cost reductions to countries in southeast Asia (Malaysia, Thailand, Indonesia and Singapore), depending on transit time. U.S.,” EIA said. “LNG exports to India, Pakistan and the Middle East are not expected to flow through the Panama Canal because alternative routes, either the Suez Canal or around the southern tip of Africa, have lower transportation costs.”

Currently, about 9.2 Bcf/d of U.S. natural gas liquefaction capacity is either in operation or under construction, according to EIA. By 2020, the United States is set to become the world’s third-largest LNG producer, after Australia and Qatar. More than 4 Bcf/d of U.S. liquefaction capacity has long-term contracts with markets in Asia, of which 3.2 Bcf/d is contracted to Japan, South Korea and Indonesia.

An additional 2.9 Bcf/d of U.S. capacity under construction has been contracted long-term to various countries. Flexibility in destination clauses allows these contracted volumes to be taken to any LNG market in the world. Assuming all contracted volumes transit the Panama Canal, EIA estimates that LNG traffic through the canal could reach more than 550 vessels annually, or one to two vessels per day, by 2021.