Shipping congestion that has slowed passage through the Panama Canal since last year amid strong demand for liquefied natural gas (LNG) and other goods between Asia and the United States has finally eased, after wait times peaked at 16 days for vessels with unreserved slots. 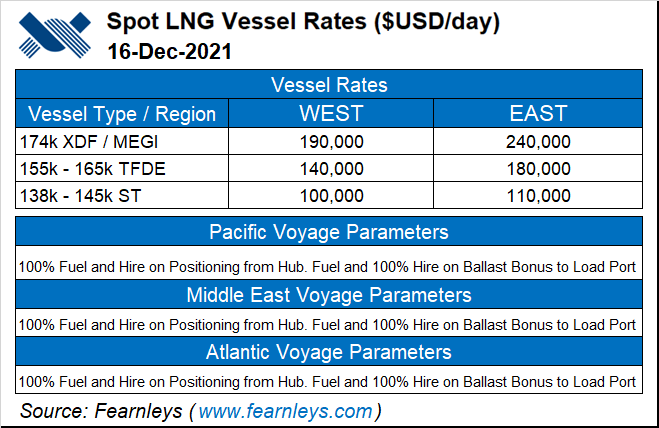 “The arbitrage was open to Asia almost all of 2021, contributing to Panama Canal congestion,” said Poten & Partners’ Jason Feer, global head of business intelligence at the shipbroker.

Trades into Europe and Asia are still profitable, with recent waiting times for ships without reserved slots dropping significantly. They are around six and seven days for northbound passage toward the Gulf Coast and three days for southbound traffic toward the Pacific Basin, according to the Panama Canal Authority (PCA). Ships with reserved slots have faced fewer delays. The canal is the preferred route between the Atlantic and Pacific, offering a quicker route to Asia than other alternatives.

Demand and longer sailing times to Asia have pushed freight rates to record highs in recent weeks. Spot rates in the Pacific Basin surpassed $300,000/day last month, according to Spark Commodities. They’ve since dipped below $200,000. Spark CEO Tim Mendelssohn told NGI that record-setting natural gas prices in Europe, now at a rare premium to those in Asia, are pulling LNG cargoes back into Europe, reducing ton miles and cutting demand for spot shipping.

The nearer-term outlook is stronger as competition is expected to remain strong for LNG this winter. Energy Aspects said in a recent note to clients that it expects some Panama congestion in the January to February timeframe.

The congestion has been a constant challenge for LNG vessels without reservations heading to Asia. The number of LNG vessels transiting the canal increased substantially from 399 in 2019, to 419 in 2020 and 537 this year, according to the PCA.

Usually, U.S. flows are expected to be split between Europe and Asia, Feer told NGI, but last year’s cold weather depleted inventories in Asia and in Europe. Unusually warm weather over the summer in Asia also saw more U.S. LNG head east for consumption on a prompt basis, which helped keep Asian prices high into the fall.

To help ease canal congestion, the PCA changed its transit reservation schedules in early January to allow LNG vessels to reserve two slots rather than one. Reservations can be made 15 to 80 days ahead of time. Auctions were also introduced by the authority, Feer said, to sell off any slots that were available a few days before transit, due to last-minute cancellations.

“Tanker rates were higher earlier than usual, partly due to last year’s cold winter, which saw buyers unable to find cargoes or ships at any price,” he added. “Many charterers signed multi-voyage, short and medium-term charters in the early spring, which led to an early spike in rates and a lack of availability, because so many ships were chartered earlier in the year which resulted in an increase in traffic going through the canal.”

As U.S. export terminals add liquefaction capacity, more sellers plan exports to Asia, and will continue to rely on the Panama Canal. A total of 516 million tons passed through the channel, including containers, grains, chemicals and LNG, from October 2020 through September, according to the PCA.