As the Trans-Pacific Partnership (TPP) pact among the United States and 11 Asia-Pacific nations advances, its adoption wouldn’t mean much for exports of liquefied natural gas (LNG) from the United States, at least not in the near term. 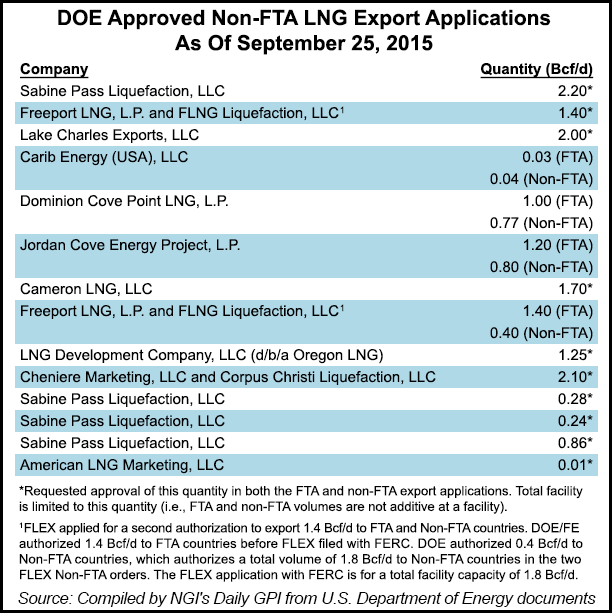 That’s because multiple liquefaction and export projects already hold the necessary non-free trade agreement (FTA) export approvals from the U.S. Department of Energy (DOE) to export to Japan and other members of the TPP.

“I would say that the opportunity that the TPP has for LNG exports isn’t necessarily in the short term because we have over 10.5 Bcf/d already approved for export to non-FTA countries that both have FERC [Federal Energy Regulatory Commission] approval and DOE approval,” said America’s Natural Gas Alliance’s Erica Bowman, vice president for research and policy analysis. “So I think in the short term it may not mean that much.

“I think in the long term, any time you’re creating more markets that have a standardized set of rules that enable fewer trade barriers for the trade of goods and energy, you’re going to see benefits to that. And I think as these countries grow in their own economies, there may be more demand growth that comes from them. For the U.S. to be able to supply them will certainly be a benefit.”

For the next round of LNG development, though, adoption of the TPP would mean that exports to TPP member countries would be presumed by DOE to be in the public interest and essentially automatically approved, as are exports to FTA countries currently.

This week, the United States concluded TPP negotiations. That would appear to be good news for pro-trade interests, but the United States Chamber of Commerce is taking a wait-and-see stance. Chamber CEO Thomas Donohue said, “While a high-standard trade agreement covering nearly 40% of the world economy is a worthy goal that enjoys our full support, we reserve judgment on the agreement pending review of the final text with our members.

“Too often, U.S. companies are forced to compete with one hand tied behind their back in the Asia-Pacific region. High tariffs, non-tariff barriers, and other measures at times deny a level playing field for U.S.-made products and services. Further, a web of more than 140 trade agreements has spread across the region, providing advantages for participating nations, while the U.S. is often stuck on the outside, looking in.”

Should the TPP be adopted, it could have consequences for natural gas interests at home as it could stimulate the further onshoring of petrochemical and manufacturing businesses, given the United States’ low-cost and abundant supplies of natural gas, Bowman said.

Donohue said the pact could be “a game-changer” for U.S. workers, farmers and companies. “The U.S. business and agricultural communities agree we must tear down the barriers that shut out U.S. goods and services and put fairness and accountability at the fore in our trade relations with this vital region.”