The Pacific Northwest’s 10-year natural gas outlook calls for abundant supply options and a modest 1.5% increase in demand this year, according to the latest assessment by the Northwest Gas Association (NWGA). 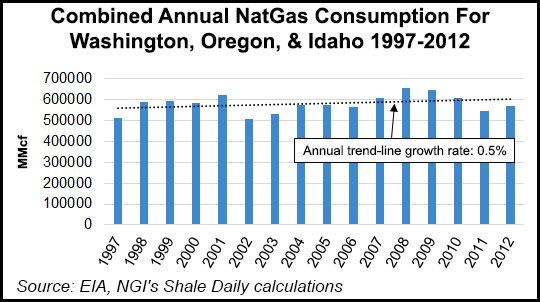 NWGA’s relatively bullish outlook issued on Tuesday includes assumptions that gas prices will remain “reasonable” over the forecast period and additional infrastructure will be added as needed. A key variable among several is expected impacts on the regional infrastructure and gas flows if one of two proposed liquefied natural gas (LNG) export projects is built in Oregon (see Daily GPI, May 20, 2013).

The outlook concludes that the Pacific Northwest would benefit from less price competition with eastern markets as gas flows shift from traditional producing regions to the more geographically diverse shale plays. It said spot and futures prices rebounded last year, although they “continue to reflect an abundance of North American natural gas.”

The region benefits from two nearby burgeoning gas supply areas: Western Canada and the U.S. Rockies, the report said. This is allowing gas distribution utilities in the Northwest to look for ways to create additional markets in transportation, industrial sectors and the power generation space.

As a scarcity-to-abundance saga, both the scope and scale of North America’s natural gas bonanza continues to “astonish” most observers, the NWGA report said. It attributes the national good fortune to innovation and improved technologies in decades-old production technologies.

The regional outlook offers the caveat that key variables remain regarding the effect of relatively low gas commodity prices on future investment; the impact of environmental and other concerns directed at hydraulic fracturing; and the possibility of local and national legislation limiting extraction processes.

NWGA’s report also offers an outlook on British Columbia gas supplies, noting that a November report by the provincial government in November estimated that unconventional resources in the province have more than doubled. It compared the growth in BC gas resources to what has been happening in the Marcellus and Eagle Ford shales.

“Estimates of unconventional gas [in BC] will continue to change as new wells are developed and technology advances,” the outlook said.

Combined natural gas consumption in Washington, Oregon and Idaho grew at a trend-line rate of 0.5% per year between 1997-2012, according to Energy Information Administration data, a rate unlikely to make suppliers rush to redirect vast amounts of gas to the Pacific Northwest.