While acknowledging the coronavirus’ ultimate impacts are still unknown, the annual natural gas outlook for the Pacific Northwest is a mirror image of the recent past: abundant supply, low prices, modest demand and adequate capacity, according to the Northwest Gas Association (NWGA). 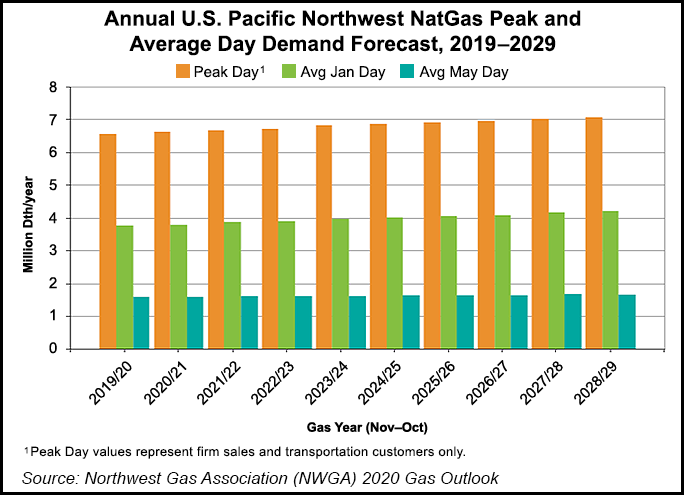 NWGA released its outlook on Tuesday, labeling the annual report as “background information,” given the current North American projections for continued ample, low-priced gas supplies for the foreseeable future.

The projections carried caveats and uncertainty, however, starting with the nation’s ongoing national response to Covid-19, and varying state and federal actions amid the outbreak. The political and economic fallout nationally and abroad also could upend the market, while “other shocks” may weaken household and business spending in 2020, according to the report.

NWGA’s outlook also examined the role natural gas has to play amid a push toward more environmentally friendly energy. The report cites the American Gas Association’s contention that “carbon dioxide emissions are at a 25-year low due to the use of natural gas and gas technologies. Making a pathway to achieve our shared goal of reducing emissions while maintaining affordability, reliability, and the quality of life that Americans enjoy.”

Natural gas prices are projected to stay below $5/Mcf for several decades while overall demand growth averages about 1% annually, including a slowing of annual industrial demand growth from 0.5% to 0.2%, according to the outlook. With the continuing phase-out of coal, growth in gas-fired electric generation may average above 1% annually, the report said.

NWGA said the Canadian and U.S. supply basins for the three-state and British Columbia (BC) Pacific Northwest region have “demonstrated that the resource will be amply available for several generations to come.”

Capacity for the region’s 128,000 miles of pipelines is more than adequate “to transport the gas from where it is produced hundreds of miles away to where it is needed, and we have enough storage capacity (52.9 Bcf, 2.8 Bcf/d withdrawal) to serve loads during the coldest weather,” NWGA said. The caveat, however, is that the pipes have to be able to operate at maximum total capacity and storage levels need to be high, according to the association.

In BC, Idaho, Oregon and Washington state, a push to build out greater production of renewable natural gas (RNG) is underway and expected to add to the availability of the near-zero emission fuel throughout the region. Gas distributors like FortisBC, Puget Sound Energy, Cascade Natural Gas, and NW Natural are working on various parts of the RNG push.