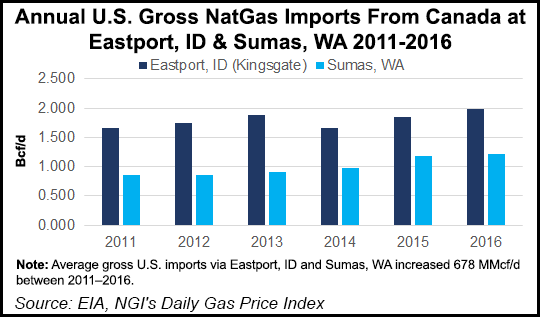 Pacific NorthWest chairman Anuar Taib explained the disappointment in a brief statement. “The extremely challenging environment brought about by the prolonged depressed prices and shifts in the energy industry have led us to this decision.”

The consortium said the decision to drop the jumbo plan for 40 years of overseas tanker exports of 3.2 Bcf/d followed months of “careful and total review of the project amid changes in market conditions.”

As a drilling partnership titled the North Montney Joint Venture (JV), the Pacific NorthWest group continues to hold an 800,000-acre spread of supply development prospects in the richest, most accessible northern BC and Alberta shale gas formation.

TransCanada Corp. anticipated the LNG cancellation with a March pipeline application to the National Energy Board (NEB). Permission is sought to change the North Montney Mainline, originally approved as a supply conduit for the tanker terminal, into an addition of 1.5 Bcf/d to TransCanada’s Alberta and BC supply collection grid, Nova Gas Transmission Ltd. (NGTL).

The Asian consortium estimated its work to date on its Montney asset spread has identified 15,000 locations for horizontal drilling and hydraulic fracturing to tap 52 Tcf of economically viable gas reserves.

In response to the Petronas decision to pull the LNG project, TransCanada’s Karl Johannson, executive vice president of Canada and Mexico natural gas pipelines, said the Calgary-based operator was reviewing its options related to the proposed Prince Rupert Gas Transmission (PRGT) project “as we continue to focus on our significant investments in new and existing natural gas infrastructure to meet our customers’ needs.

“As part of our agreement with Petronas affiliate Progress Energy, following receipt of a termination notice, TransCanada would be reimbursed for the full costs and carrying charges incurred to advance the PRGT project. We expect to receive this payment later in 2017.”

Johannson said TransCanada was “proud of the work we have done along the PRGT route, which has allowed us to sign 14 project agreements with First Nations and secure the key regulatory approvals and permits. We have built strong new relationships, and we look forward to continuing our strong partnerships with First Nations and communities in BC as we develop other natural gas assets, including our North Montney Mainline project.”

The overseas tanker terminal cancellation ends a five-year effort to launch LNG exports that included a special session of the BC legislature last year to approve favorable tax, royalty and other arrangements. Federal regulatory approvals were granted last fall.

But the NEB observed that market hurdles remained formidable, in a review released last week of Canadian prospects for breaking into the crowded global LNG scene. Lower-cost competition from the United States was rated as especially strong.

The Pacific NorthWest cancellation leaves one proposal for a mega-scale BC tanker export terminal still standing: a 3.7 Bcf/d project proposed by the LNG Canada consortium of Shell Canada, Kogas, Petrochina and Mitsubishi Corp. Another 16 projects remain lined up on paper but reporting no progress.

LNG Canada, while continuing engineering and marketing work, foreshadowed delays with a recent application to the NEB. The group is asking for a five-year extension of its export license deadline for starting shipments, setting a new target date of 2027.

The request for more time echoes the NEB’s global development assessment. “The market for LNG has experienced significant changes,” said the Shell-led BC team.