Natural gas local distribution companies (LDC) in Oregon and Washington, backed by their import pipeline, have set out to prevent eastbound diversion of their British Columbia (BC) supplies to Alberta and the rest of Canada and the United States. 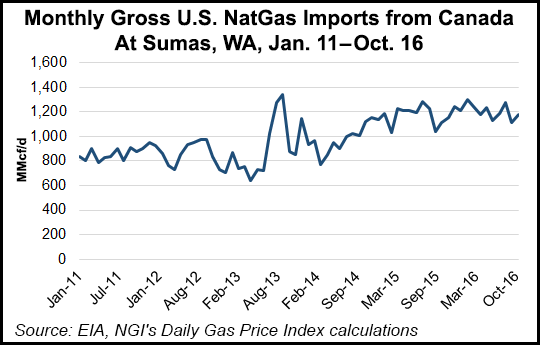 EUG-PNG and Westcoast — plus a Canadian ally, provincial gas distributor FortisBC Energy Inc. — are demanding a review of a split decision by a three-member NEB panel to let NGTL grant bargain shipping rates on a proposed major addition to its BC lines.

The panel majority, board members James Ballem and Murray Lytle, approved “rolled-in” tolling for NGTL’s Towerbirch project. The C$470 million (US$352 million) line would collect and send east an initial 590 MMcf/d, to be produced from the Montney Shale formation west of the BC leg in the Alaska Highway by the Cutbank Ridge Partnership of Encana Corp. and Mitsubishi Corp.

Parrish wrote that “by utilizing rolled-in tolling, NGTL would be able to offer [Towerbirch] service…at a toll increment of only 0.9 cents/Mcf [US0.7 cents], versus a comparable standalone toll of 9.2 cents/Mcf [US7 cents].” The result would be that “NGTL will be provided with an insurmountable competitive advantage.”

The standalone tolling regime for Westcoast arises from the formerly separate evolution of the BC and Alberta pipeline networks. Until TransCanada bought NGTL parent Nova Corp. in 1998 for C$14 billion (US$10.5 billion), both were confined to their home provinces.

Under the old regime NEB regulated the BC system. The Alberta Energy Regulator’s ancestor supervised NGTL. The takeover enabled TransCanada to expand NGTL into BC. NEB acquired jurisdiction over both provincial pipeline grids.

Parrish suggested larger public interests — in environmental and native rights protection concerns that increasingly dominate Canadian pipeline affairs — would be served by reforming the business and regulatory heritages of the Westcoast and NGTL grids.

Evening out the differences “would help to ensure that NGTL and shippers have the appropriate tolling incentives to more carefully consider cumulative environmental and socioeconomic effects in northeastern British Columbia,” Parrish wrote.

The Towerbirch quarrel is the third outbreak of complex conflicts over NGTL regulatory and commercial advantages in BC. The U.S. Pacific Northwest gas importers sided with Westcoast to win partial victories against rolled-in tolls for TransCanada projects known as North Montney and Komie North.

But the North Montney and Komie cases involved proposed northern Pacific Coast export terminals for liquefied natural gas. The Towerbirch line is designed to top up NGTL’s home Alberta grid, which fulfills voracious gas demand by thermal oil sands plants and serves as the trading and storage hub for markets across North America.

In the Towerbirch dispute the American EUG-PNG coalition told NEB that imports account for nearly two-thirds of 2 Bcf/d of U.S. deliveries by Northwest Pipeline, and 80% of the Canadian gas comes from Westcoast. The U.S. firms receive the minority of their imports from NGTL and say increasing deliveries from the Alberta system would require costly, time-consuming pipeline additions.

NGTL insists Towerbirch deserves rolled-in tolls because it would ship gas straight east into the Alberta grid, and has potential to lower rates for all shippers by spreading its costs thinner over rising traffic volumes. NGTL’s supporters include the Canadian Association of Petroleum Producers.

NGTL forecasts production from the shale drilling sweet spot in the Montney formation that would fill Towerbirch will quadruple to 1.2 Bcf/d by 2025. Over the same period Alberta oil sands plant consumption is projected to grow by 1.5 Bcf/d or 75%to 3.5 Bcf/d.

Painted Pony Petroleum Ltd., a Montney drilling specialist, added a plea for pipeline peace to the gas producer request for dismissal of the toll and competition review request by Westcoast and its U.S. customers.

“During periods of low pricing and limited access to pipeline infrastructure, very careful planning is required to synchronize; the drilling of wells, building of required gathering infrastructure, construction of processing facilities, arrangement of capital funding, approval of requisite budgets, and hiring and training of sufficient staff,” Painted Pony told NEB.

“The ”trickle down’ implications to project planning and the economic development of the natural gas industry, caused by continuous objections to competing projects by the regulated pipeline companies, for whatever motivations, will only continue to impede the development of these projects.”

NGTL has a target of Nov. 1, 2017, for completing Towerbirch. NEB is collecting submissions on the toll dispute until Jan. 13 and sets no date for a ruling. Mandatory ratification of the board’s project approval by the federal cabinet in Ottawa has been postponed.