The sweeping Inflation Recovery Act, which cleared the Senate over the weekend, offers many positives for the energy sector, according to Occidental Petroleum Corp. CEO Vicki Hollub. 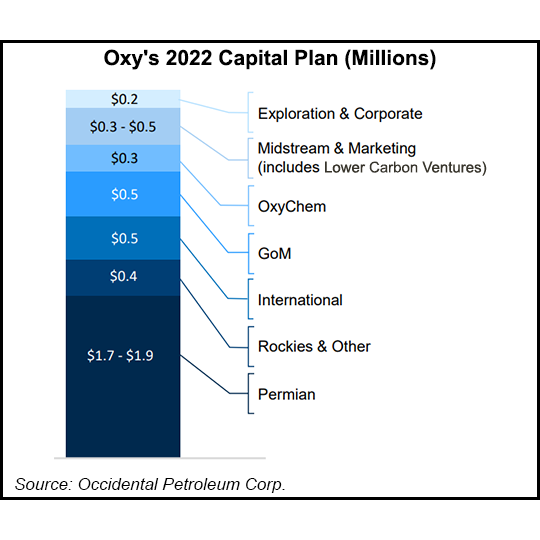 Houston-based Oxy, as it is better known, held its second quarter conference call Thursday, helmed by Hollub and her executive team.

The exploration and production (E&P) independent has a queue of U.S. oil and natural gas projects, from the deepwater Gulf of Mexico (GOM) to the Permian and Denver-Julesburg (DJ) basins. Also in the works are carbon capture sequestration and utilization (CCUS) facilities, along with a massive direct air capture (DAC) project to be sited in the Permian.

Oxy’s portfolio is primed for many of the credit and tax provisions in the Senate Democrats’ Inflation Recovery Act, Hollub said. After clearing the Senate on Sunday, the legislation is headed to the House, where it is expected to pass. President Biden has signaled he will sign it into law.

Some of the big ticket items set to positively impact Oxy include changes to federal oil and gas royalty rates, Hollub said. Other “good things” would require oil and gas lease sales to be a priority “ahead of granting rights of ways to wind and solar,” the CEO said.

“One of the interesting things about the Act is that it reinstates Lease Sale 257 in the GOM,” Hollub noted. The lease sale, held last fall, was rejected in January by a district court. Oxy “had gotten some key leases” in the sale. “And so that’s really important for us as a company. The other thing is that it requires the resumption of the scheduled lease sales for the GOM from 2017 to 2022.”

The federal leasing opportunities regarding methane emission reductions and carbon capture “is very good for our industry,” said Oxy’s Richard Jackson, operations president of U.S. Onshore Resources and Carbon Management. “Lots of companies will benefit from this and will provide jobs. And it will help the country meet the goals that the president has set out for emission reduction.”

The CCUS provisions in the legislation are “probably the most impactful to us,” Hollub said. “There are a lot of things around the enhanced tax credit,” which could boost carbon capture projects like the DAC in the Permian.

“When you look at the Gulf of Mexico benefits, and you look at the requirements for the methane emissions and reductions and that sort of thing, which are things we already were doing, this is turning into, for us, net very positive should it get passed,” Hollub said.

Jackson said the “critical pieces” such as the DAC project, “continue to move.” Construction is set to begin “by the end of this year…”

The E&P is “working hard on putting together specific bid packages and being very thoughtful about the supply chain behind that as we go into the end of the year,” Jackson said. There continues to be “very strong support” from the market to remove carbon dioxide (CO2) from facilities.

“Obviously, the policy support coupled with that…would really help backstop our development plan…As we continue to de-risk, we are thoughtful on how to think about capitalization, not only for Plant One but beyond…”

The E&P management team expects “partnerships will be meaningful” as carbon capture is expensive. One item the management team is working on is reducing the cost of capturing carbon for the life of the plant, Jackson told analysts.

Oxy also is advancing three CCUS hubs to be sited on the Gulf Coast. In April, it inked an agreement with Enterprise Products Partners LP for one CO2 transportation and sequestration hub that would serve oil and gas operators in the Greater Houston area. Others are on the drawing board.

The hubs, as designed by Oxy, would provide access to pore space and transportation infrastructure.

“We’ve been able to secure over 100,000-acre targets for pore space developments,” Jackson said. There also has been “lots of great engagement with emitters…” Oxy also is working with midstream partners to “retrofit or think about moving CO2 efficiently within those hubs. So if that goes well, expect more updates on both of those as we go into the year…”

Producing power from the CCUS, particularly the DAC plans “is going to be revolutionary, I believe, for the electric power generation industry around the world…

“And we’re looking at some other technologies. There are a few things that we’re putting money into that we believe as a real chance to improve our business.”

During the quarter, Oxy “enhanced and expanded” through early 2025 a Permian partnership with Colombia’s state-owned Ecopetrol SA that was begun in 2019. Under the expanded capital carry joint venture (JV), the partnership would accelerate development across 20,000 net acres of West Texas, in the Midland and Delaware sub-basins.

The Permian JV to date “has worked exceptionally well for both partners,” Hollub said, “with Oxy benefiting from incremental production and cash flow from the Midland Basin with minimal investment. We are fortunate to collaborate with a partner who has extensive expertise…”

In May, Ecopetrol and Oxy also agreed to explore some deepwater areas of the Caribbean, about 93 miles off the Colombia coast.

Meanwhile, subsidiary OxyChem is moving forward on the Battleground petrochemical facility adjacent to the Houston Ship Channel southeast of Houston in Deer Park. Construction is to begin in 2023, with ramp up in early 2026. Battleground is to be upgraded and expanded to improve margins and enhance operational flexibility.

Chlor-alkali capacity would be expanded to cover commercial and supply chain initiatives.

“The project is being undertaken in part to respond to customer demand for fluorine chlorine derivatives and certain grades of caustic soda that we can produce with newer technology,” Hollub said. Capital spending of up to $21 billion would be spread over three years.

“The Battleground project represents the first sizable investment we’ve made in OxyChem since the construction and completion of the…plant and ethylene crackers that were completed in 2017,” Hollub noted,