Houston-based Occidental Petroleum Corp.’s (Oxy) $57 billion counter bid to acquire Anadarko Petroleum Corp. out from under Chevron Corp., which CEO Vicki Hollub said remained a friendly, not hostile offer, is based on the value of its Lower 48 properties, particularly the Permian Basin. 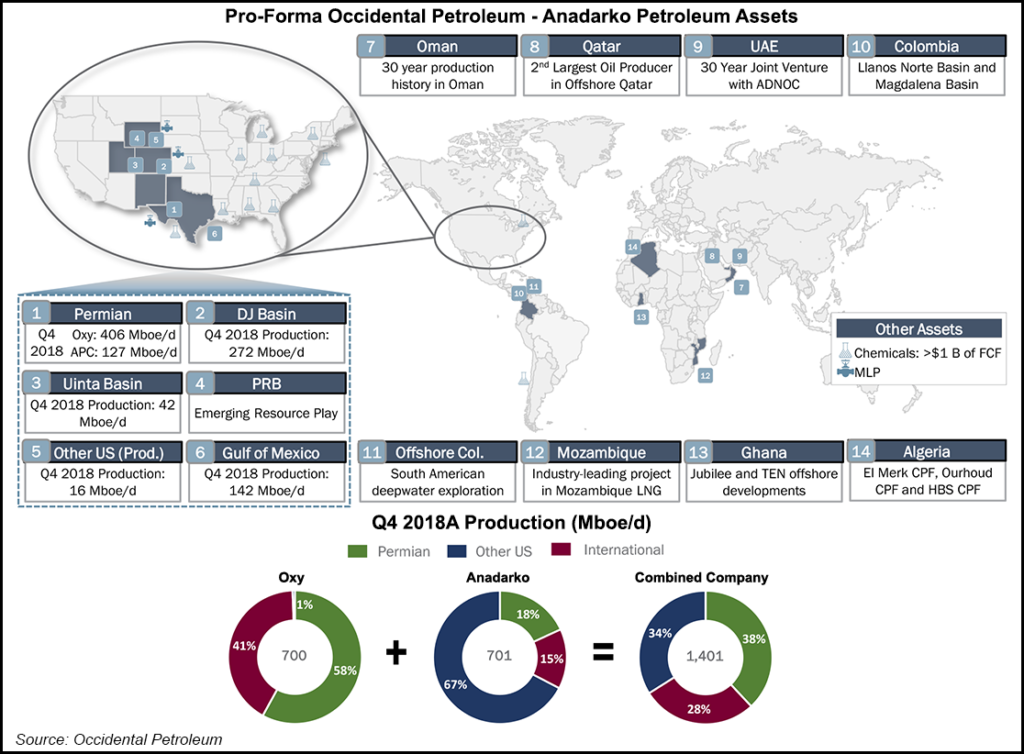 Oxy on Wednesday made a cash-and-stock offer estimated to be a 20% premium to the supermajor’s bid earlier this month. Oxy offered to pay an overall price estimated at $76/share in a cash-and-stock deal valued at $57 billion, based on its closing price on Tuesday. The offer includes assuming net debt and the book value of noncontrolling interests.

Chevron’s cash-and-stock offer earlier this month, estimated at $33 billion, or around $50 billion including debt, is structured as 75% stock and 25% cash. The overall value is estimated at $65/share, based on Chevron’s closing price on April 11, the day before the offer was made.

Oxy plans to deploy its expertise to enhance Anadarko’s assets not only in the Permian, considered the lynchpin of the portfolio, but also its global assets, Oxy CEO Vicki Hollub said. Oxy in recent years has become more Permian-oriented, but it has worldwide operations in almost every energy sector.

“As you know Occidental has long admired Anadarko, and we believe that a combination of our two companies would create a global energy leader with a winning shareholder value proposition,” Hollub wrote in a letter to the Anadarko board. “The resulting diverse but focused company will be a world leader in shale development and enhanced oil recovery.”

Hollub revealed that Oxy has made three offers to Anadarko “since late March,” each “significantly higher” than Chevron’s offer.

“Our most recent proposal, conveyed in writing on the morning of April 11, followed by a merger agreement we were prepared to sign, was for $76/share, comprised of 40% cash and 60% stock,” Hollub wrote. “We were surprised and disappointed that your board did not engage with us on that proposal, or our proposal of April 8, even though both were significantly higher than the price you accepted from Chevron.”

Oxy’s board has unanimously approved the latest proposal and has financing commitments in hand with BofA Merrill Lynch and Citi for the cash portion of the proposal.

“Our merger agreement will not contain any financing condition, and we do not anticipate any delay to completing the regulatory approval process,” Hollub wrote. “We would expect to seek the approval of the shareholders of both companies and close a transaction in the second half of 2019.”

Hollub said it was “unfortunate that Anadarko agreed to pay a break up fee of $1 billion, representing approximately $2/share, without even picking up the phone to speak to us after we made two proposals during the week of April 8 that were at a significantly higher value to the transaction you were apparently negotiating with Chevron.”

Anadarko acknowledged that it had received the offer and said the board “will carefully review Occidental’s proposal to determine the course of action that it believes is in the best interest of the company’s stockholders. The Anadarko board has not made any determination as to whether Occidental’s proposal constitutes, or could reasonably be expected to result in, a superior proposal under the terms of the Chevron merger agreement.”

The Anadarko board plans to respond to the Oxy proposal once a review is completed, but reaffirmed “its existing recommendation of the transaction with Chevron at this time.”

CNBC’s David Faber interviewed Hollub shortly after the Oxy offer was publicly announced early Wednesday. “We are the right acquirer for Anadarko Petroleum because we can get the most out of the shale,” Hollub said. “What hasn’t been talked about very much is that the upside in this deal is the shale play, is the shale development.

“Seventy-five percent of the value of Anadarko is in the shale, and we’re the best company to develop the shale. We have a proven track record in the Permian.”

Chevron also has a proven track record in its legacy play. When Chevron announced its proposal, CEO Michael Wirth had emphasized that the transaction would be more than “just a shale play.”

Specifically in the Permian, the Chevron-Anadarko combination would create a 75-mile-wide corridor across the Delaware sub-basin. Chevron also eclipsed Wall Street earnings expectations for 4Q2018, with surging Permian production helping to lift output by 12% year/year to 3.1 million boe/d.

Hollub acknowledged in the CNBC interview that Anadarko’s Mozambique liquefied natural gas (LNG) export project and its broad Gulf of Mexico (GOM) prospects are “not synergistic with us.” Both are in Chevron’s wheelhouse.

Why, Faber asked, would Oxy proceed if its proposal “clearly” did not appeal to Anadarko’s board?

In July 2017, Oxy made its “first approach” to discuss a merger with CEO Al Walker, Hollub said. “Since then, we’ve been in friendly transactions and conversation and engagement. And even today, this is still a friendly engagement…”

Hollub disagreed that many will view Oxy’s offer as hostile. Oxy has “the most compelling bid out there today, and we can add the most value through the shale development,” she told Faber.

Asked if Oxy had been looking at other Lower 48 developments beyond Anadarko, Hollub said “in the two years that we’ve been working on this, there is no other opportunity that has the upside potential that this does. This is one of those very rare opportunities.”

The Oxy CEO claimed that in the Delaware sub-basin, Oxy wells perform about 74% better than Anadarko’s, with lower costs overall. With more than 10,000 wells that could be drilled, “that’s a huge upside.”

One of the Anadarko board’s concerns is said to be the price of Oxy shares. Faber asked what assurances Hollub could give that the Oxy share price would hold up, given shareholder concerns.

“What we haven’t had a chance to do is talk to our shareholders and help them understand the strategy here and how we view this,” Hollub said. “Now…we’ll have the opportunity to be clearer with them about what we intend to do and why this makes sense.” She said she was confident shareholders would support the merger.

The proposed transaction would enhance Oxy’s position as one of the largest producers in the Permian with an estimated 533,000 boe/d of total output. Anadarko also is a leading operator in Colorado’s Denver-Julesburg Basin, the GOM, as well as Algeria and Ghana, with growing LNG opportunities.

According to Oxy, the combination would lead to more than 1.4 million boe/d of current production. Additionally, Oxy wants to leverage existing initiatives to use its carbon dioxide enhanced oil recovery expertise and infrastructure “for economic and social benefit by applying its low carbon strategy to Anadarko’s asset base.”

The merger is expected to be accretive to Oxy’s cash flow and free cash flow (FCF) on a per share basis “after dividends in 2020 and beyond…” Oxy said it also has identified $3.5 billion in annual FCF improvements that would be “fully achieved by 2021, comprised of $2 billion in annual pre-tax run-rate cost synergies, and $1.5 billion of capital reductions, with the potential for further upside…

“The annual capital reduction will be delivered in the first year and result in moderating near-term production growth from 10-15% on a combined basis.”

Financial analysts on Wednesday said the bidding war for Anadarko was unheard of in the exploration and production (E&P) sector. The high stakes bidding has set up a “virtually unprecedented scenario in the E&P industry: a genuine, outright bidding war,” according to Raymond James & Associates Inc. “It is hard to recall the last time something quite like this happened.”

“To put the point even more strongly, Occidental is going head-to-head against a supermajor four times its size,” Molchanov said. “To the extent that there will be a ”winner’ i.e., who will ultimately get to acquire Anadarko, we think Chevron is more likely to emerge in that position.”

Chevron may try to match or even top Oxy’s bid.

“However, needless to say this is an extremely fluid situation, and we have to be candid that any predictions are merely guesses at this point,” Molchanov said. In the near term, “this is unambiguously bad news for Oxy as a stock.

“Bearing in mind the prospect of a potentially prolonged bidding war, along with the massive equity issuance and borrowing required (relative to Oxy’s share base and balance sheet), Oxy shares will come under intense pressure; there is no sugarcoating this.”

In a strictly fundamental sense, Molchanov said the transaction could be accretive for Oxy, but even so, the news places shareholders “in a difficult position.”

Analysts with Tudor, Pickering, Holt & Co. Inc. (TPH) noted the synergies that Oxy expects to recoup from the deal, pegged at $3.5 billion overall, with $900 million from capital synergies, $1.1 billion via operating expenditures and general/administrative (G&A) costs, and $1.5 billion from reduced capital spending.

“In our view, we see Oxy’s bid as more representative of the true value for Anadarko, though we think the overall asset base is a more strategic fit with Chevron,” the TPH team said.

“We’ll be watching to see if/how Chevron responds to the competing bid, along with the reaction of Anadarko shareholders as the market has been pricing in a higher offer given the $1 billion break up fee associated with the deal,” worth around $2/share for Anadarko.

“While this public release formalizes Oxy’s bid for Anadarko, an asset which management has been looking at since 2017, we continue to believe there are other potential deals on the market that are smaller in nature, offer more contiguous Permian acreage to Oxy’s existing position, and offer similar G&A synergies while generating free cash flow.”

Wood Mackenzie analyst Soe Sutherland said the proposed offer “would put Occidental alongside ConocoPhillips in a peer group of two, as a super independent.” ConocoPhillips, formerly a supermajor, became the world’s largest independent after selling off its downstream operations to focus on E&P.

However, the deal is going to be a big financial stretch for Oxy, as its gearing ratio at the end of the fourth quarter was 25%. “A potential transaction would materially increase the company’s leverage ratios and stretch its balance sheet,” Sutherland said.

“The deal underscores Occidental’s need to scale up in the Permian Basin,” she noted. “If the deal goes through, it would give the company ”ExxonMobil or Chevron-like’ Permian scale, and set them up to join the Million Boe/d Permian Club in the late 2020s, according to our base case.”

In addition, the deal highlights that diversity “is still valued by U.S. independents, and would mark Occidental’s entry into deepwater Gulf of Mexico and LNG.” Oxy’s enhanced oil recovery (EOR) skills also could unlock value, as it “has a fantastic track record for EOR, and is currently the largest carbon dioxide injector in the Permian Basin. In addition, Occidental has a track record of operating in areas of high geopolitical risk. It is less likely to divest the Algeria and Ghana components of Anadarko’s portfolio.”

“However, Oxy would be challenged to deliver asset sales, capital and operating cost synergies and superior execution on the acquired assets to fund debt reduction should its bid for Anadarko prove successful…While Moody’s expects that Oxy would prioritize debt reduction, that effort would start from an exceedingly high level.”